ASL Action Pack 9 - To the Bridge! 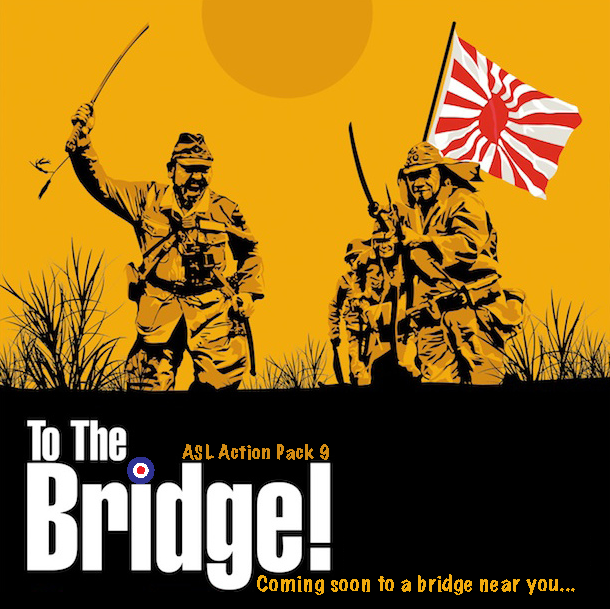 The 55th Division was activated in Japan in August 1940. Two of its infantry regiments were assigned to the invasion of Burma, arriving in Indochina in December 1941. Unlike the veteran 5th Division, the 55th does not appear to have had combat experience prior to its commitment to Burma.11 By 28 December, however, there was no question that men of the 2nd Bn, 143rd Regt at Bokpyin had been well and truly bloodied. So bloodied were they, that three squads in AP84 begin the game Step-Reduced (G1.11), and one of the Japanese officers is wounded (A17.) at start. Adding insults to injuries, the Japanese force is low on ammunition (A19.131), and split in two. One platoon is hunkered down along the shore of the estuary. Two battered platoons are dug in around the hillside police post.
The Burma Rifles were recruited from among the many indigenous peoples of Burma, and led by British officers. When first raised, recruits were drawn mainly from among the Karens, Kachins, and Chins. Burmans “were considered unsuitable for military service, as being neither loyal nor martial enough.” However, later expansion and political pressure led to the recruitment of some Burmans. According to one British veteran, most Burmans “proved unreliable and even treacherous when put to the test of battle.” To be fair, Burmans resented the British presence in their homeland more than most. According to the same British officer, the 2nd Battalion suffered some desertions as a result, but those who remained were “steadfast.”12
Steadfast or not, Gary has chosen to represent the Burma Rifles as a Second Line unit, with an Experience Level Rating (ELR) of two. Although susceptible to Cowering (A25.45), the natives are in the care of four leaders. And despite their second-line status, the sepoys are just as competent as their officers when it comes to firing the company’s 2-inch mortars. In addition to several MG, the Commonwealth force can rely upon the impressively steadfast firepower of an offshore “gunboat.” During the battle, a gunboat provided welcome fire support. Gary has utilized an infrequent Scenario Special Rule (SSR) to model the participation of this riverine boat in battle.13 In my view, the SSR does an excellent good job of mimicking the direct and indirect fire support that was available historically. For ease, the gunboat cannot be targeted during play, and all fire from weapons aboard the vessel are traced from the same, onboard hex.

The timing of the Japanese offensive coincided with the Burmese dry season, prime campaigning weather. Consequently, the jungle is tinderbox dry. Mindful of this, Gary has prohibited Kindling (B25.11). Japanese white phosphorus (WP) rounds pose a small risk of igniting an inferno.14 This possibility is offset by a multitude of paths and roads that provide the attacker with numerous lines of approach.
Commonwealth forces win if they control all buildings at game end. Failing that, they must accrue at least five more VP than the Japanese do. Each side earns CVP normally. Victory Points are also earned for each building hex that is not a hut (G5.).
I have a hunch that this tourney-sized scenario will prove popular. Granted the Japanese are permitted to set up ten percent of their force hidden per G1.631, but an SSR neatly sidesteps the potential for a “bug hunt.” Any Japanese units that remain hidden at the beginning of Japanese Player Turn 4 must conduct a special Banzai Charge (G1.5)—no conjuring a half-squad out of thin air on the next to last turn.
In spite of their inexperience, the sepoys of C Company reclaimed Bokpyin. Within a week they had rejoined their parent unit at Mergui. Other battalions of the 2nd Burma Brigade would fair less well in the coming days.


The colonial OB in AP86 is a jumbled mix of eleven squads of varying quality and ability. They represent a company from the 1/7th Gurkhas, and a platoon each from the 1st Battalion, 9th Royal Jats Regiment, and the 4th Battalion, The Burma Rifles. With their superior morale and unique talents, the Gurkhas (A25.43) are unquestionably the backbone of the relief force. They may, however, be a bit too supercharged for the period. The 16th Indian Infantry, of which the 1/7th Gurkhas and 1/9th Jats were a part, had only arrived in Burma a month earlier. The general standard of training was apparently not good, and the brigade had no experience operating in jungle terrain. Consequently, I am not sure that the Gurkhas deserve an ELR 5, or an underscored Morale Level (A19.3), at this stage of the Burma Campaign.25 That said, Gary sensibly split the difference when he assigned the Jats and the Burma Rifles the same ELR. In spite of their real-world differences, the added bookkeeping would not be worth the trouble.
The three leaders in the Indian force, while not mediocre, are hardly stellar. Together with the few weapons in colonial hands, average leadership is a good counterweight to the seven 4-5-8s in the Commonwealth OB. The MMG begins play dismantled. So the Bren guns will need to do the heavy lifting, as the Indians attempt to fallback in good order. The lone light mortar could prove important, if it can provide a smoke screen for the withdrawal. But it too begins play dismantled. Truth be told, the terrain is more likely to slow the Japanese than any combination of Bren and rifle fire on Turn 1.
The Moei River separates Miyawadi from the Thai settlement of Mae Sot. The terrain rises sharply from the river, and a few kilometres west culminates in a series of hills where the bulk of D Company, 1/7th Gurkha Rifles was positioned. Between these hills and the heights of the Dawna Range father west was a valley cut by the only motorable road connecting Miyawadi to Moulmein. Japanese advance elements had barely descended into the valley when they bumped into the largely Indian relief force travelling in the opposite direction.


The first thing that strikes me about the playing area is the denseness of the ground. Thankfully, bamboo is not in play. No roads exist save the main one running north to south. All other brush-roads and “jungle-roads” are paths (B13.6). And for those new to the PTO, no paths exist in the palm tree hexes (G4.1).


As you can see from the map, the cactus hedge is one continuous wall of green enclosing an area of kunai. Walls to the north and east remain, however. Although it would have been in keeping with historical practice to transform all walls into cactus hedges, those in the north would have become a death trap for the Indians. Play testing confirmed this. Historicity concerns aside, the primary reason for the presence of cactus hedges in AP86 is to prevent the Japanese from breezing past the colonials on Turn 1. The reduced stacking limits of dense jungle—which also apply to movement along paths, and the restrictions imposed on movement by the cactus hedge, go a long way toward to keeping Japanese ambitions in check. [Edit: (27 May 2014) In the event that both sides share the G14-15 cactus-hedge hexside at start, Perry Cocke of MMP has ruled that the side moving second receives Wall Advantage (WA). Although this appears to contradict B9.322 and step 1.32B of ASOP, Perry's ruling probably makes sense given the situation depicted in AP86.]


Before I forget, I wanted to remind newer players that dense jungle has a +2 Terrain Effects Modifier (TEM), although -1 TEM still applies for Airbursts (B13.3). Lines of sight are quite restricted though, and the light mortars are not a big threat. Depending on the situation, dense jungle may be a better place to be than a hut, which brings me to my next point.


All buildings, even stone ones, are huts. Building K7 may have presented a problem, but Gary avoided this by ruling out the presence of an upper level. For all intents and purposes, this multi-hex building is treated just like a hut. This includes making it single storey for LOS and Hindrance purposes (G5.2), not unlike palm tree hexes.


Now that we have had a detailed look at the opposing sides, and the terrain over which they must fight, it is almost time to determine who has the initiative. Set up is simultaneous—with a spare board placed between opposing forces, and a die roll decides which side moves first. The die roll is the easy part. Set up, not so much.


Both sides are permitted to begin play concealed, regardless of terrain. Concealment is a good fit for this scenario because it removes part of the advantage afforded to the player who goes first. It also encourages movement over fire. The tricky part is trying to anticipate what your opponent’s dispositions will look like when the curtain, or in this case the board, goes up.26 Another hurdle to overcome is trying to commit the playing area to memory before placement of the screen. In a friendly match, I would have no difficulty with a duplicate board placed to one side for reference during set up. In a tournament setting, however, memorizing the lay of the land is part of the pre-game sequence, a kind of Kim’s game within the game.


25. The Gurkhas portrayed in Andrew Rogers’ J150 “Sangshak Redemption” are quite varied. The scenario takes place in Sangshak, India in March 1944. Although the MMC representing the 153rd Gurkha Parachute Battalion share an underscored Morale Factor, they have different Strength Factors. In my view, the mix of 6-4-8, 4-5-8, and 4-5-7 squads in the Gurkha OB gives the force are more realistic character.
26. Players are instructed to place a spare board along the tightrope separating these areas. I would recommend a mounted board for the task. I would also recommend a healthy buffer zone between the boundary and any counters that set up adjacent to it. Nothing spoils an ASL party like toppled stacks, especially formerly concealed ones.
27. Up until May 1942, the zenith of Japanese power in the Pacific, Good Order Japanese units may accept the surrender of most enemy units, and capture them in CC. The Chinese and Japanese have more history. Beginning in 1938, NQ is always in effect whenever these arch rivals face each other (G18.7).

Email ThisBlogThis!Share to TwitterShare to FacebookShare to Pinterest
Labels: Action Pack 9, AP83 Thai Hot, AP86 Milling About, Board 7a, Board 8a, Board 9a, Burma 1942, Gary Fortenberry
Newer Posts Older Posts Home
Subscribe to: Posts (Atom)