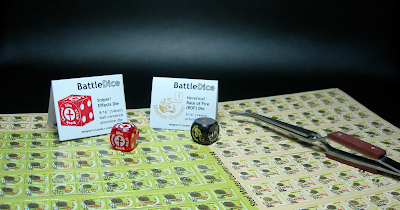 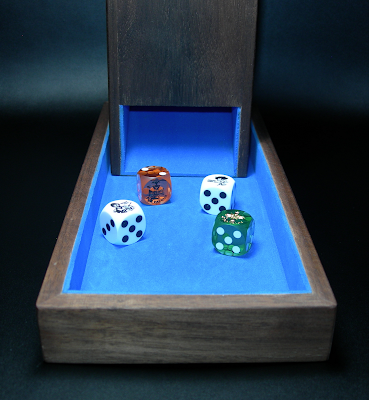 Give me five!
The lowest roll this time around was five. The lucky fellow was Mike Cadieux. Mike is an active promoter of the hobby, and the Oklahoma City Thunderbird ASL Tournament, in particular. Mike will receive a sampler sheet of turret counters, a pair of cross-locking tweezers, two of our latest precision dice, and a $20.00 gift certificate for our KitShop.
One Countersmith Workshop counter sheet contains enough turrets to equip two of each turreted American and “British” vehicle in the ASL order of battle.1 There are also extra turrets for vehicles equipped with gyrostabilizers.
The compact six-inch tweezers will accommodate both ½” and ⅝” counters. Conveniently, the default position of this tool is closed. Once you pick up a counter with these nifty tweezers you can relax, the counter will not fall until you release it by squeezing the tweezers a second time. Now available in our KitShop, these tweezers were quite popular at ASLOK. Helen has become quite protective of her pair.
Our new specialty dice are 9/16” (~14mm). The Sniper! effects die is tangerine-red with images on the one- and two-spots. You can read more about this new die near the end of Sniper! post.
The ROF die is black. There are images on the ace, deuce, and trey (three-spot). The “Master Gunner,” or ace, is in gold foil. The “Oberkanonier,” or deuce, is in silver. The Cyrillic text is Russian for “gunner,” or “artilleryman.” The text and Russian 82mm mortar are in copper foil. The design is fairly intuitive, but I will elaborate more on the concept in a later post. All BattleDice are available through our KitShop.
Congratulations Jim and Mike!
I will try to get another short post out this week regarding ASLOK, but a more comprehensive post will have to wait until later in the month. I still need to post an after-action report for the Canadian ASL Open, not to mention several other posts in various stages of completion. So if you will bear with me, there is plenty of new material in the pipeline for October.
Note
1. Exception: there are no turrets for the Marmon-Herrington IIv armoured cars, nor for the 2pdr Portee (British vehicle notes 49 and 77, respectively).
Posted by Chris Doary at 23:05 2 feedback