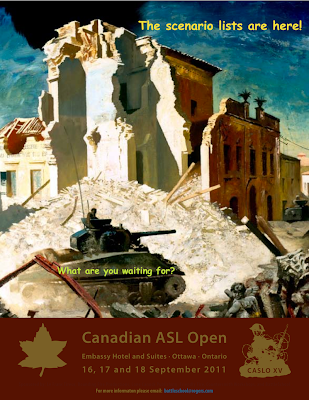 The Canadian ASL Open (CASLO) is barely six weeks away. If you have yet to register, here are some reasons to do so today.
The Purple Heart Mini
This year the CASLO will feature a Mini tournament geared toward newer and less experienced players. The “Purple Heart Mini” is a single-elimination event running from Saturday through to Sunday. Players eliminated in the first or second round of the Mini may engage in open play thereafter.1
The “Purple Heart Mini” is the ideal place for tyros to earn their first wound stripes. A tyro is a competitor competing in an event for the first time. However, one need not be a tyro to enter the Mini.2
We have selected scenarios that provide players with challenging situations, but which generally do not require advanced knowledge of the ASL rule set to play. For instance, in the first and second rounds, players can choose from a minimum of two scenarios featuring no vehicles, and very little, if any ordnance. For those players interested in combined-arms actions, we have included one scenario with vehicles in each of these rounds. 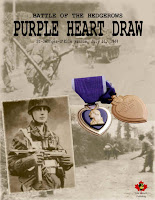 Because the third round is for all the marbles, or in this case a copy of Lone Canuck’s Purple Heart Draw, we have provided two scenarios that feature Armored Fighting Vehicles (AFV). These scenarios will give the finalists a greater opportunity to play a more complex scenario in the last round. Players will notice that there is also a fourth scenario choice for the third round. We included this fast-playing, infantry-only scenario as an option for players who wish to finish early on Sunday. Note that this scenario is only an option if both players agree to play it instead of the other scenarios in the round.

The Main Event
The winner of the CASLO, or main event, will receive a copy of Le Franc Tireur’s new historical module Kampfgrupper Scherer: the Shield of Cholm. The CASLO consists of five rounds. Participants play all five rounds, with the winner determined by points. A player scores 10 points for winning a match, and receives one bonus point for every victory that  his defeated opponents have at the end of the tournament.
Sponsored rounds
Each round of the CASLO has five scenarios to choose from. In addition, four of the rounds are sponsored by ASL publishers. In each of the sponsored rounds, three of the scenarios are drawn from the sponsor’s library of scenarios. Should a player opt to play one of the sponsor’s scenarios (in the sponsored round), he or she is automatically entered in the raffle for this round. The winner of the raffle will receive a scenario pack from the sponsor.
In recognition of the late Ian Daglish’s contributions to ASL, we have included his favourite scenario design in the last round of the CASLO. Copies of this and other scenarios will be available at the tournament. Players who have pre-registered may request a pdf copy of any scenario on the list that they currently do not have access to. These copies are for tournament use only.
For more information, check out this post, or contact me, the Tournament Director, at battleschool@rogers.com
See you in September!
Notes
1. In most cases, a player who played in the Main (the CASLO) tournament on Friday will return to next round of the CASLO.
2. A handicap may apply to more experienced players, i.e. those seeded in the top half of the field.
Posted by Chris Doary at 21:36