The Delight is in the Details 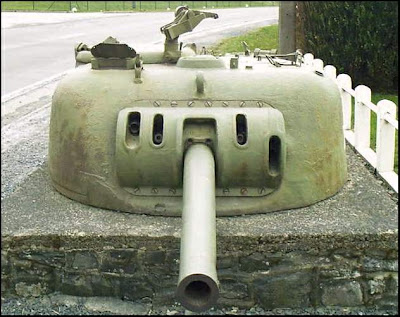 American and Commonwealth turrets have arrived. A set of Countersmith turrets includes three counter sheets, enough to provide six turrets for each model of vehicle. In the case of the latest module, each sheet is identical and contains two turrets for each model—more on this later.
Initial impressions
I should point out right away that the turrets in Module B are a slight departure from those in Module A. The German and Russian turrets have a matte finish, which I personally prefer. The American and Commonwealth turrets have a glossy finish that apparently is easier to read and may wear better than the turrets in the first module.

The first module also uses a less satisfactory method of punching the counters. This is the same method used in Avalon Hill (AH) modules such as Yanks. I do not like it because I am left with a bit of cardboard to trim from the sides of the counters. To be fair, the problem is not as pronounced as on AH counters. For some reason the punch used for Module A does not leave cardboard on all four sides of a counter like the AH punch did. Module B avoids this problem by using a punch that leaves the counters attached only at the corners. This is industry standard. It is encouraging to see that Countersmith heeded customer feedback and made the change before producing a second module.
As promised...
In response to my earlier post, a reader asked if I could show him a picture of what the turrets looked like when in use. I thought that others might appreciate the photograph. However, I must confess that I am a notorious counter clipper.1 The counters in the picture below have been trimmed with an ultra-sharp scalpel, and an unsteady hand. 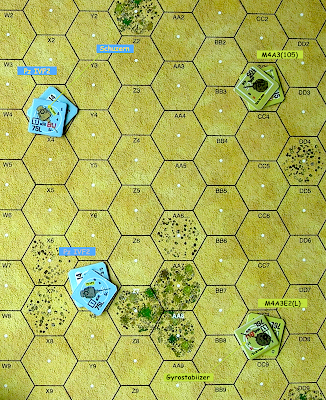 Heads up, heads down, and a whole lot more
Actually, there is another reason why I wanted to post these pictures. I thought it would be a good opportunity to highlight a few of the advantages of these counters over the generic white turrets that come with Beyond Valor.
I really like what Countersmith Workshop has done with the German turret set. The late model PzKpfw VIE (L), for instance, is depicted in Dunkelgelb (dark-yellow), whereas the earlier model is in Dunkelgrau (dark-grey). Until late 1942, the Germans had used a dark-grey paint for most of their armored fighting vehicles (AFV). Experience in North Africa2 and elsewhere led them to adopt an earth-tone schema.
For game purposes, the colors do not represent a particular year. Rather, they help me distinguish between two similar turrets. To cite another example, take a look at the pair of Panzerkampfwagen IVF2 in the photograph above. Both vehicles are identical models. The difference is that the vehicle with the dark-yellow turret is equipped with Schuzern, or armored skirts (which appeared later in the war), while the other turret is not.
While on the subject of armor protection, I may as well mention that the armor factors (AF) for the turret are printed on the turret counter. In this example, the front armor of the turret and the hull is the same. However, the side and rear of the turret is not. In fact, the vehicle has superior turret armor on these aspects. So while the side and rear of the hull has only AF 3, the turret has AF 4. This is a handy feature, especially for newer players.
BU
Another thing that grabbed my eye, was the bold “BU” in red. I like the red for a couple of reasons. The bright-red letters not only remind me that the crew of the vehicle is buttoned-up (BU), but also prompt me to check to see if a particular weapon system is available or not. In the case of these German tanks, it is not an issue. However, the red “BU” does remind me that I will suffer a +1 dice-roll modifier (DRM) if I attempt to use my Smoke discharge (sD), or fire my Main Armament (MA). Speaking of the sD, the usage number is displayed on the turret—no need to flip the AFV counter to check. Too often I forget about the discharger by midgame.
The American tanks use the same color coding. In the case of my mythical desert battle above, the Sherman M4A3E2(L) is buttoned-up. Because it is BU, I cannot fire the anti-aircraft machine gun (AAMG), signified by the red strike-through. No big deal, you say.

Fair enough, but the red strike-through is a very welcome reminder on the crew-exposed (CE) side of a Russian T34/76 turret. As with other restricted, slow traverse (RST) turrets, the crew cannot fire the MA or the coaxial machine gun (CMG) while CE. The crew of a vehicle with a one-man turret (1MT) has the same problem while CE. At least twice in the past year I have witnessed players attempt to fire the MA of a T-34 while CE. A red strike-through on the MA of their turret counters when CE may have saved them some embarrassment, and perhaps a tank.
Gyro
Another handy thing about these turret sets is that they include turrets with gyrostabilizers (gyro). Granted the fact that a vehicle has a gyro is usually kept secret until the gyro's To-Hit modifier is utilized. However, once known, it is much easier to keep track of which vehicle is so equipped by substituting a turret with a gyro. Consequently, if I have a vehicle known by my opponent to be equipped with a gyro, I can substitute a turret with a gyro for the one without. A turret with a gyro is signified by a white ring inside the standard white ring used to indicate a vehicle with fast turret traverse. The M4A3E2(L) in the photograph above is therefore known to be equipped with a gyrostabilizer. To this end, Module B includes an additional six turrets for each vehicle model that may be equipped with a gyro.
There are heaps of other helpful things noted on these turret counters. I have highlighted a handful below. (My apologies for the quality of the images.)


A few sets in stock effective 24 January 2016.
UPDATE: 2 Sep 2011
In his blog Wall Advantage, Ian Wiley noticed that there were no turrets for the Marmon-Herrington IIv armoured cars , and also none for the 2pdr Portee (British vehicle notes 49 and 77, respectively). My apologies for not double checking before I posted.


Notes
1. I was not always this way. I retired my old counters after acquiring the much improved ones that MMP printed in Beyond Valor 3rd edition, For King and Country, Armies of Oblivion, and so on. I clipped my new counters for two reasons. First, clipping rids the counters of the little bits of cardboard on the corners. These excess bits of cardboard can be problematic when stacking counters. Admittedly, this is not a problem with all counters, but in for a penny in for pound of counters. The second reason is slightly more contentious. I, along with many others, believe that clipping the corners slightly will reduce the likelihood of premature wear. The same untidy bits at the corners that cause stacking problems are also prone to catch on other objects, possibly tearing or separating the counter in the process. By the way, if you are inclined to clip counters, try to save clipping counters for a rainy or wintry day. CAUTION: change the blade of your knife frequently. A dull blade is dangerous, especially a scalpel blade—ouch! There you have it. I have spared you an entire post on the merits of clipping counters.
2. Initially, AFV in North Africa were dark-grey. However, after soldiers began applying mud and other local expedients, the Wehrmacht authorized a Gelbbraun (yellow-brown) paint. Other colors were also used, but Gelbbraun was the most common. Gelbbraun was lighter in appearance than Dunkelgelb.
Posted by Chris Doary at 01:41

Nice Review. Like the Pics. The MkB Mode seems heaps better than the first version. I have been hesitant about getting into custom turrets and the MkA Modes did not do it for me. But, the MkB's look pretty sweet. They would be convenient for heavy AFV action. See, I can justify this. Feel myself getting weaker. COUNTERS mmMMMMM...