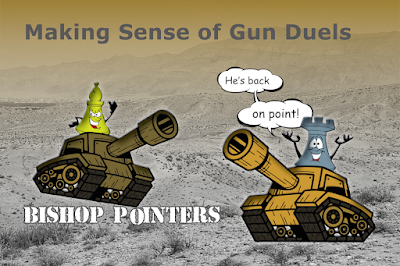 A rookie player suggested Jim take a stab at explaining Gun Duels. Said rookie had some remarkable misconceptions about the subject, not least that duels must necessarily involve Guns. This article intends to dispel such misconceptions, and elaborate on the topic with the help of illustrated examples. We will examine the rules for Gun Duels, when they may be made, and most important, how they’re resolved.

Gun Duels are typically declared by the phasing player, the player whose turn is currently under way—the ATTACKER in ASL parlance. There’s a singular case where the DEFENDER (the non-phasing player) may declare a Gun Duel that we’ll deal with later. But for now it’s enough to say that all Gun Duels involve at least one Moving vehicle. A Moving vehicle, as explained in an earlier post, is a vehicle that’s currently conducting ITS Movement Phase (MPh).

Although typically a vehicle, the second duelist can be any unit that satisfies the requirements of C2.2401. Moreover, neither duelist need be packing a Gun. The Index of the ASL Rule Book (ASLRB) defines Guns in two ways. For firing purposes, a Gun is any weapon on a ⅝” counter that is currently firing as ordnance, that is, using the To Hit (TH) Table to score a hit first before resolving the effects with a second Dice Roll (DR) on the Infantry Fire Table (IFT) or the To Kill Table. For non-firing purposes, a Gun is any non-vehicular weapon on a ⅝” counter. For example, an Anti-Aircraft (AA) Gun such as a Flak 30 that uses its Infantry Firepower Equivalent (IFE) to attack directly on the IFT isn’t a Gun for firing purposes. 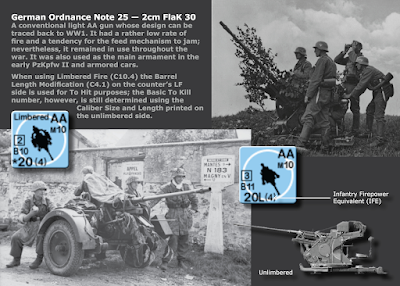 Once a Gun Duel is declared in accordance with C2.2401, no third party may attack the Moving vehicle until the Gun Duel is resolved. Assuming that the loser of a Gun Duel survives the winner’s attack, a duel ends after resolving the return attack. Occasionally, duelists will fire simultaneously. In that case the duel ends after the effects of both attacks are resolved. But who triggers a Gun Duel in the first place?

Whenever a DEFENDER declares a non-Reaction Fire (D7.2) Defensive First Fire (D1F) attack against a Moving vehicle, the ATTACKER may attempt to make a Bounding First Fire (B1F) attack (D3.3) first. The Moving vehicle does this by declaring a Gun Duel in an effort to beat the DEFENDER to the punch. Under normal circumstances the vehicle would have to await the outcome of D1F before it could respond with B1F. However, if the vehicle wins the Gun Duel, it can attack before (or at the same time as) the DEFENDER. Furthermore, the Moving vehicle needn’t attempt to attack with its Main Armament (MA). Any Secondary Armament (SA), MG, Passengers or Riders otherwise capable of making an attack could declare a B1F attack, and therefore, a Gun Duel. It should come as no surprise that there are a few caveats. 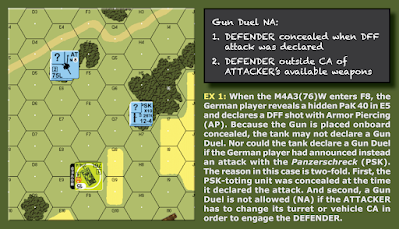 Stop yer bellyaching and pay attention! In order to determine who attacks first, each duelist tallies up all Firer-Based (C5.) and Acquisition (C6.5) Dice-Roll Modifiers (DRM) applicable to its attack. These sums represent each duelist’s Gun Duel DRM totals. The duelist with the lower total attacks first. Should the first attack break, Stun, Shock, or eliminate the target, a return attack will not occur.

Again there are exceptions. Neither the +1 DRM for a Gyrostabilizer (D11.11) nor the doubling of the lower dr for a Motion or Non-Stopped firer in TH Case C4 (C5.35) apply to the Gun Duel DRM calculation.2 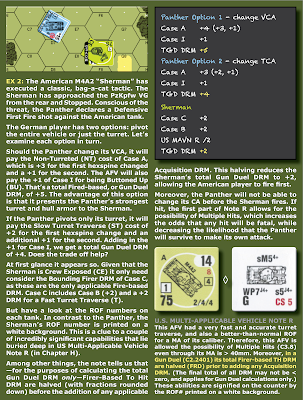 But wait, there’s more! Should the Gun Duel DRM totals tie, the duelist with the lower Final To Hit DR attacks first. The Final To Hit DR is the sum of the DR and all applicable Firer- and Target-Based DRM. As already noted, the outcome of the first attack may well void a return attack. In those exceedingly rare cases where the Final To Hit DR are the same, the attacks occur simultaneously. 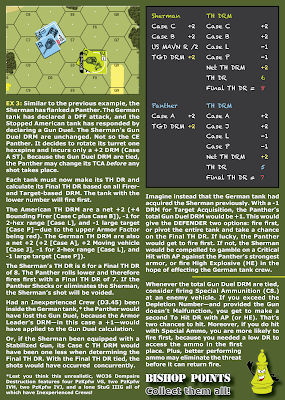 Those of you who can’t get enough of Gun Duels are in luck. Once the initial Gun Duel is resolved, the DEFENDER may announce another D1F attack against the Moving vehicle. And once again, the ATTACKER may, “if otherwise able and allowed to,” declare another Gun Duel. Such cases are uncommon, but when they do arise, the printed Rate of Fire (ROF) of one firing weapon per side may be used as a negative DRM in calculating a side’s Gun Duel DRM.3

There are a couple more considerations to be aware of with regard to a non-ordnance attack. The first is that TH Case A (C5.1) will apply to the Gun Duel DRM calculation if the D1F attack is made by Personnel and/or weapons mounted-on or aboard a vehicle that’s changing CA. The second is that “all such non-turret-mounted fire is considered Non-Turreted (NT) for purposes of TH Case C” (C2.2401; C5.3). Translation: a +3 Gun Duel DRM for non-turret-mounted fire, or a +5 Gun Duel DRM if the vehicle is Non-Stopped or in Motion. 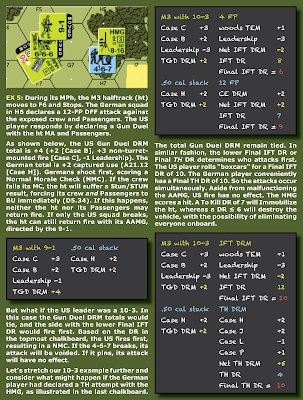 If a Moving vehicle declares a Bounding First Fire attack before expending any Movement Points (MP), the DEFENDER may declare a Gun Duel, but only with the units that are the target of the B1F attack (C5.33). Third parties may not intervene. This was clarified in what passes for an official Question-and-Answer some time ago. The procedures for determining who attacks first are otherwise the same as for an ATTACKER-declared Gun Duel. 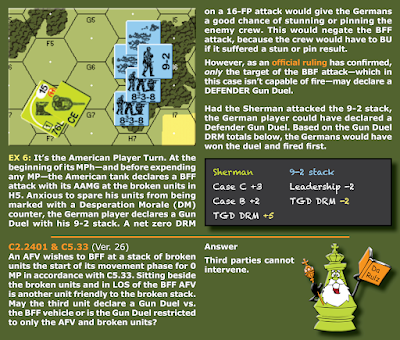 Regardless of which side declares a Gun Duel, only the DEFENDER may attempt to change Covered Arc (CA) during a Gun Duel. However, the timing of any CA change is dependent upon whether the DEFENDER has a Gun Duel DRM less than or equal to that of the Moving vehicle. It is important to recognize that when Gun Duel DRM are equal, any CA change  will occur before the tie-breaking Final TH DR determines who attacks first. If the DEFENDER’s Gun Duel DRM are greater, the DEFENDER must await the outcome of the B1F attack, and if still able to, change CA before making a return attack. Pivoting to present a superior Armor Facing is an important consideration for a DEFENDING vehicle, often more important than any potential attack against the Moving vehicle.

During the course of rewriting and expanding Jim’s article, I encountered a number of situations that gave me pause to reflect on the intent of C2.2401. After talking them over with Jim and others, I decided to send them to Perry Cocke for adjudication. That was in September 2021. I have yet to receive any answers to my shopping list of questions. So instead, I’ll leave you with another list of questions—this time with answers—concerning Gun Duels. Enjoy! 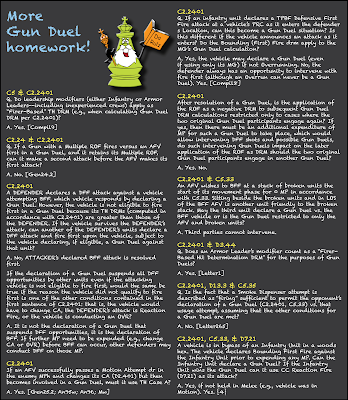 As always, we hope that you found this article useful. Should you spot an error or need clarification on some aspect, please let us know. If there is a topic you would like to see covered please let Jim know that too. As demonstrated here, he just might take you up on it.

Until next time. — Jim and Chris.

1. Unlike a concealed Gun, which only loses concealment after it fires, and then only if it rolls a 5 or 6 on the colored die roll, other units normally lose concealment the moment they declare an attack. I think the last sentence of the illustrated example in C2.2401 nails it, however, by stating “concealed when it declared its attack” [emphasis added].

2. There is an old question-and-answer that deals with these modifiers:

Q. The rule states “Neither the +1 DRM for a Gyrostabiliser nor the doubling of the lower dr of the TH DR for other Guns in Case C4 is included in this calculation.” Does this mean the Case C modifier of +1 for G (only) is ignored? The Case C4 modifier (only)? Or both?

3. Ed. I intended to elaborate on this subject. However, I ran into some trouble when delving into the subject more deeply. I discussed the matter with several players last year, but we could not agree on how the rule was intended to be played. So I dispensed with the topic. Having drafted this article six months ago, I didn’t want to delay publication further.

4. According to A.5, “whenever an attack is made by multiple attacking units/weapons, if a modifier applies to some, but not all, of the attacking units, it applies to the attack only if detrimental to the attacker.” And as the question-and-answer below confirms, the leadership DRM is ignored for the purposes of this calculation unless a leader with the same or better leadership DRM is present in both Locations.

Tussle in the Tundra 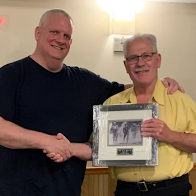