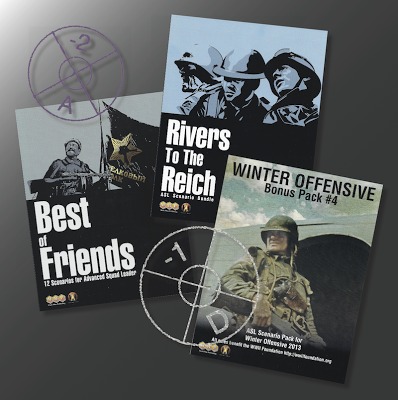 I have wanted to attend the Winter Offensive event hosted by Multi-Man Publishing for some time. I regret not going last year when the weather was unseasonably mild for January. MMP puts on a terrific gaming festival—ASL is not the only game on the table in Bowie, Maryland. But playing ASL is only one of many good reasons to attend. Getting your mittens on the latest gaming goodies is another.

This is where the swellest guy on the GameSquad ASL Forums comes in. Winter Offensive had barely begun. But that did not stop me from asking Spencer Armstrong why he was not already in Bowie. His new addition to the family notwithstanding, he lives close enough to the venue to hear Larry Zoet scream “Critical Hit!” So why was he still at home? Turns out he was headed to the tourney the next morning.
Excellent, I thought, as I proceeded to tell him about my plans to preview MMP’s latest releases. I moaned that I would not be able to post anything for some time. (It can take a month for an order to reach Ottawa—barely nine hours drive north of MMP headquarters.) Taking pity on me, he asked if he could help. Silly question. I accepted. Then I posed my own silly question. I asked him what his impressions of the new packs were. His reply was blunt, concise, and informative. It was a great read, and I wanted to share it with my readers on Sitrep. Spencer kindly consented.
What follows is a cross-border look at three ASL publications that MMP pulled from its hat last weekend. Nice trick.1 I will let Spencer fire the first shots.
Rivers to the Reich—First Fire
Components: 15 scenarios (updated versions of Squad Leader scenarios), 2 sheets of overlays (reprints from GI: Anvil of Victory)
MMP assures us that Rivers to the Reich (RttR) completes what I think of as the “Nostalgia Pack” series. This is the one I’ve looked at the least, because I’m unlikely to play anything from it. Scenarios range from the absurdly tiny (one features a side with two squads, another a side with three squads) to the absolutely monstrous (U38 “Clearing the Breskens Pocket,” a 34-turn beast, actually combines two already quite large scenarios). I was curious about the conversions, so I compared some of these scenarios with their original versions. Many are unit-for-unit translations of their Squad Leader predecessors, but some have more significant changes. U34 “The Dornot Watermark” actually uses board 40 in place of boards 8 and 15 in a river crossing. As closely as many track their original versions, I find it difficult to believe that these are really well tested and balanced for ASL. However, I don’t know any competitive players who play these, so it’s probably not a big deal.
The overlays are of the same style and prettiness as the Map Bundle maps, but are just new productions of the old GI: Anvil of Victory (GI) overlays. They have been renumbered in the style of ASL overlays (hexes 1 and 2) but they still aren’t really ASL overlays. Some have hexside terrain that need to be included, but most are cut inside the hexsides. One is rectangular. All are simply lifted parts of other boards. Consequently, they’re fairly restrictive and don’t seem likely to see much additional use. Thankfully, overlays appear to be cheap these days, so this inclusion likely doesn’t affect the price much (more on this below).
If you get misty about the good old beer and pretzel days, these may be right up your alley. I’ll file them and take a pass, as I did with Turning the Tide. Not all change is progress, but scenario design has progressed significantly since the days of these dinosaurs.

For the fourth year running, there is nothing for fans of the Pacific Theatre. And unlike last year, there is nothing east of the Elbe. Did I mention the cool, new board?
I would like to thank Spencer for sharing the burden of the work involved with preparing this post. Not only did he provide the central narrative, but he also helped with sundry requests for additional information and graphics. The post is better for his assistance. Any errors are mine. Kitshop stocks all of the scenario packs in this post.
Notes
1. Rising Sun was too big for the hat.
2. Mercifully, the ASL version has dispensed with two of the overlays.
3. The original version used 16 boards.
4. Scenarios R211 to R223 were designed to be played with only the rules up to and including the Crescendo of Doom “gamette.” Notwithstanding this, Spencer directed me toward an official pronouncement he found on the cover of the Fourth Edition Rule Book of Cross of Iron. The good book states that: “There is no official version for any scenario and the rules to be used are a matter of personal choice between you and your opponent.” As Spencer so eloquently put it, “It was horseshit, but it was official horseshit.”
5. Wayne Hadady, Jeff Leonard, Jim Mehl, Bill Stoppel, and Lee Tankersly play tested many of the scenarios in RttR. I recognize most of these names. I do not think that they would have been involved with the project if they had not seen some value in adapting Squad Leader scenarios to ASL. Or maybe they just came for the beer and pretzels.
6. Steve Myrberg was also credited as a designer.
7. I have played “Maczek Fire Brigade” at least twice, once against the august Tom Repetti. The scenario gets two thumbs up from me. Erik Leander also designed several of the scenarios in Swedish Volunteers, including my favourite: “Lions and Tin Men.”

Can't wait till i get mine in the mail.

I want's the RotR and WOBP, not so keen in the FrF pack as I have all the scenarios, though obviously not the corrected versions

Thanks for reading guys. And good luck in the draw on 1 February!

I feel like this is going to be an expensive ASL year...

And busy year. Finding time to organize all this new kit will be a challenge. But I think it best to start by using some of it first.

Bryan I think any year is an expensive ASL year :-)

Don't know one way or another if the Rogue scenarios were the first to feature Canadians, but worth noting that one of the lettered scenarios in the General - "Semper Paratus" - depicted the RHLI. I never noticed Semper Paratus at the time (only one hobby shop sold copies of The General, and my limited means at that time prevented me from making the cross-town trip to find it). But I did order the Rogue Series 200 and was delighted to see the inclusion of Canadians (it may have made up for the shock of seeing the red terrain on the boards). Even more of a thrill was seeing my own regiment's name in the historical summary of one of the cards.