Our Man in Hong Kong 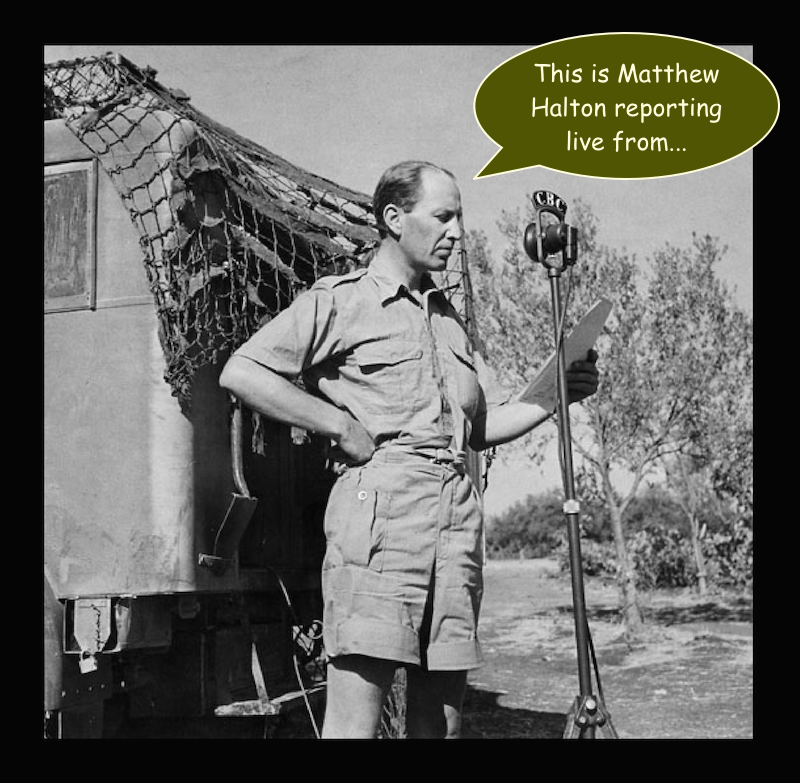 The results of our latest contest are in. Sitrep turned three on Canada Day. A month later, three Squad Leaders have another reason to celebrate the birth of a nation.
Anyone who has played ASL long enough will have experienced one of those games where the dice deliver almost unbelievable results. Such is the case with this most recent contest. With less than 20 entries, I decided to roll only two dice for each contestant. My first roll was a four. I followed it with a five, a six, and a seven. My fifth roll turned up six, and the spell appeared to have been broken. More strange were the final results.
The three players with the lowest rolls were all within 25 kilometres of each other at some point in July.1 To my knowledge, they were not attending an ASL event at the time. Nor do they necessarily live near each other. Moreover, they have something else in common. I would wager that the trio can undoubtedly explain the cultural significance of Canadian Tire money, Canada’s “sub-fiat” currency. Let’s begin with the fellow who knows a little about foreign exchange.
aiabx
Andy Beaton works for a Toronto firm that develops tools for trading just about every currency except CTC notes. Andy, aka aiabx, is a gamer’s gamer. He plays heaps of games, not just ASL. However, multiple trips to ASL Oktoberfest (in Cleveland, Ohio) have deepened Andy’s love of The Game. As Andy learned firsthand, ASLOk is a week-long festival where novices and grognards alike can experience the incredible panoply of ASL. Regrettably, Andy’s attempts to pass Canadian Tire bills at the hotel bar have not borne fruit. I am kidding, of course. Andy never carries that much cash on him.
The thing I love about ASL is that it is such fun and requires such intense focus that all other distractions slip away. It totally immerses you in the situation and clears your head of all the other troubles in your life. -Andy
With a dice roll of four, Andy had the third lowest result in our August raffle. He also had the cheekiest entry. He proposed a dice application for the iPhone. Helen loves her iPhone. This could be the lure that would encourage her to play ASL Starter Kit more regularly, or not.2 Ironically, electronic BattleDice would allow me to wind up the dice business and play more ASL. For his cheek, not to mention his concern for my ASL welfare, Andy will receive one of our three prize packages, including a set of our newest 16mm dice below. Which prize will depend on what remains after the first- and second-place winners have cherry-picked the prize pool. I think Andy will be okay with this. He has never been one to refuse free beer, or ASL candy.
Do mineur
The first entrant in our BattleDice Challenge came in second with a dice roll of five. Dave Marteinson is a tech guy, a sophisticated software developer and consultant with a sophisticated taste in wargames. Like me, Dave started playing wargames as a kid in the latter half of the 70s. He played John Hill’s Squad Leader and the follow-on “gamettes.” He also played Third Reich, Victory in the Pacific, Panzerblitz, Starfire, among others. About a year ago, Dave had a nostalgic moment. He browsed eBay looking for a copy of Squad Leader. In the process, he accidentally discovered ASL. He was surprised to find that ASL was still alive and kicking. Indeed it is. Although Squad Leader has languished since 1990—about the time that Avalon Hill stopped supporting the original game—ASL has developed into a remarkably robust system.3 Dave has capitalized on the proliferation of ASL publications, not least the ASL Starter Kits. He has reentered the hobby with the enthusiasm of a teenager, and the expense account of an empty nester. Now if Multi-Man Publishing would accept Canadian Tire cash, Dave could snap up every new ASL pub without his wife being any the wiser.
Dave prefers our larger 16mm dice. He is particularly keen on a big Sniper Effects die, and a larger rate-of-fire die, along the lines of our petite ROF cube. We had been working on another project, a Wound Severity, or “wound-check,” die. Dave’s suggestions led us to experiment with a dual-purpose die. Our forthcoming 16mm Wound Severity and Sniper Effects die satisfies Dave’s requirement for a bigger Sniper die. Meanwhile, a patient ASL player in Ohio will have his wish. It was a year ago this past week that Mike Peebles asked if we had any plans for a wound-check die. For what it’s worth, we also took Dave’s ROF idea to heart. Look for a unique twist on “ROF” dice this October.
Ottawa is less than a five-hour drive from the Greater Toronto Area (GTA). It would be great to meet Dave in person at the Canadian ASL Open (CASLO). Word on the street is that CASLO is returning to Ottawa next spring. I hope to see Dave and Andy there. Like Andy, Dave will take home one of three prize packages. While he is waiting for his goods to arrive, I thought that I would leave him with an upbeat cello piece. I have a strong suspicion that Dave is a closet cellist. Sadly, I have no clue what key the arrangement below is in, but I know what I like. It would be pure coincidence if the piece is in C Minor, or as they say in France, do mineur.

Hong Kong Wargamer
The prize for the guy with the most creative suggestions, and the lowest roll—snake eyes, is a Canadian “expat.” Kwan Jackson works and makes his home in Hong Kong. Jackson visited his family in the GTA earlier this summer, which explains why our winners came close to bumping into each other last month. Jack’s ASL background mirrors that of Dave’s. Three decades ago, Jack was a huge fan of Avalon Hill. He pushed cardboard men, tanks, and ships in Firepower, Squad Leader (and its sequels), PanzerBlitz, Panzer Leader, Tobruk, Wooden Ships and Iron Men, and Third Reich. When the real world intruded, wargames took a back seat.
A couple years ago, Jack bought a used copy of Squad Leader on eBay. The musty cardboard triggered memories of an earlier, care-free time. Hours and days spent hunched over a hexagonal world were a thing of the past. But they didn’t have to remain so. A few months later Jack took the plunge. Since picking up ASL in 2013, Jack has managed to learn a great deal. It took years for me to dip my toes in the Pacific again. Jack dove right in. Most of his play is online. Rodney Kinney’s Virtual ASL (VASL) has allowed Jack to fit ASL into his busy schedule. Because he travels a lot with work, he plays many of his games by email (PBEM). Incredibly, Jack has also found the time to attend a tournament in Singapore.
Malaya Madness was a first for Jack. The experience, despite his lack of experience, was wholly positive. I recommend that new, less-experienced, and returning players read what Jack had to say about his sojourn to Singapore. I found his comments, especially those addressed to “fellow newbies,” encouraging, which brings me to my next point. Last year Jack began a blog intended to chronicle his return to wargaming.4 Hong Kong Wargammer provides players not only with a fresh insight into ASL, but also with a firsthand look at the learning process. Because he approaches the game through the eyes of a novice, Jack tends to see things that old hands may overlook. Moreover, Jack has accumulated a list of resources to help like-minded players navigate the fascinating world of ASL. More seasoned players will find much of interest too. His amply illustrated scenario after-action reports give players of all skill levels a good preview of what to expect when they the break out the cardboard.
Jack’s analysis and comments demonstrate how much new players have to offer the hobby. Too often newbies are intimidated by the grognards who populate ASL forums and tournaments. The truth is that no one has a monopoly on imagination, or innovation. Everyone has the ability to contribute to the growth of ASL. Jack exemplifies this fact. He has been playing ASL for less than two years, but he has already attended one tournament (in another country, no less). And currently, he is helping to organize an ASL tourney in Hong Kong.5 Jack’s recent feedback also will keep us busy with new specialty dice for the foreseeable future.

When I asked players to come up with ideas for new BattleDice, Jack gave us three. Granted we designed a Starshell die last year, but his suggestion for a pair of Starshell dice are novel. So too are his ideas for Straying and Concealment dice. The Concealment dice are particularly interesting, incorporating as they do, special provisions for the Japanese. I have copied his ideas from the comments section of my last post, edited them for clarity, and pasted them into the chart below. Feel free to critique and refine them.
Jack won our contest hands down with a pair of “eyes.” But his entry clearly went the extra kilometre. Jack therefore has first “dibs” (or “chup” in Singapore) on the prizes. He already owns the new Tactical Mission Crossing the Moro. So he may well go for the KitShop cash, which will allow him to pick up Action Pack 10 when it is released.
Congratulations to Andy, Dave, and Jack! Thanks to everyone for the wealth of suggestions. We have no shortage of ideas to work with now. Good luck to all in our next contest. And thanks again for reading.
How to claim your prize
It’s easy.
1. Leave a comment at the end of this post
2. Email us at: battleschool at rogers dot com
Notes
1. The fourth hailed from Maine, the fifth from Spain. Hey that rhymes.
2. Jack also suggested that we create a VASL extension that would allow players to use electronic dice with custom graphics on certain faces, virtual BattleDice, if you will.
3. Five years after Avalon Hill’s house magazine, The General, published its last Squad Leader scenario, ASL Annual ‘90 included the last two scenarios designed specifically for Squad Leader.
4.  A link to Jack’s Wordpress blog can be found on the blog list (on the left-hand sidebar of this page) too.
5. The tournament will be hosted by the Hong Kong Society of Wargamers. The Society was founded in 1980, and is still going strong. For the more adventurous among you, why not visit Hong Kong? After touring the battle sites of the Second World War, you can join Jack and others for a weekend of ASL.