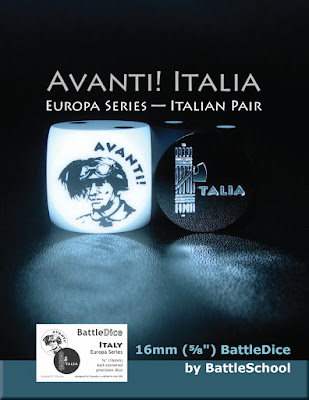 Europa Series
This series provides players with pairs of 16mm BattleDice that represent European states that fought either with, or against the Third Reich, and in some cases switched sides. The series is far from complete.

The Italian pair consists of a white die, and a black die. The white die has a light infantryman on the ace. Above the Bersaglieri is the text “Avanti!,” Italian for “Onward!” As befitting their light role, the Bersaglieri were often in the vanguard. In WWII, they traded their bicycles for motorcycles. This particular fellow, with the distinctive cockerel feathers on his helmet, is urging his countrymen onward. We used silver foil for the design on the black die. Black seemed a good fit with the fasces symbol, which does double duty as the letter “I” in the word “Italia.”

A Capitaine, a French officer, adorns the white die in the French set. The képi can hardly be confused with the headdress of another European state. But just to be sure, the bust is flanked by the text: Honneur et patrie (Honour and the Fatherland)—the motto of the French Army. The Croix de guerre, or war cross awarded for gallantry, was an obvious choice. We had no bronze foil, so copper had to suffice.

Sisu is a Finnish concept that translates loosely as grit, or determination in the face of adversity. There was a lot of that going around during the Winter War (1939-1940) when the Soviet juggernaut invaded tiny Finland. We thought that this term was a good fit with the image of the Finnish NCO popularized on the scenario card of “Fighting Withdrawal.” The stylized Finnish lion underlines this determination to defend the new state. Soumi (Finland) above the lion completes the theme.

Until the release of the Belgian pair (farther below), the Polish pair was our favourite. The lancer is already a staple of Polish mythology. It nevertheless underlines the martial spirit of Poland—the first to face the Blitzkrieg. The white eagle is likewise a central symbol. We made it as big as possible. It crowds not only the face of the red die, but also polska (Poland) itself. Even more so than the charging Uhlan, the eagle is emblematic of defiance in the face of the dark eagle that descended upon the Second Republic in September 1939.

Check out our Specialists here.

Need tracking?
Please email: battleschool at rogers dot com for a quote.
We accept PayPal, money orders in USD or CAD, and personal cheques drawn on Canadian and US banks.