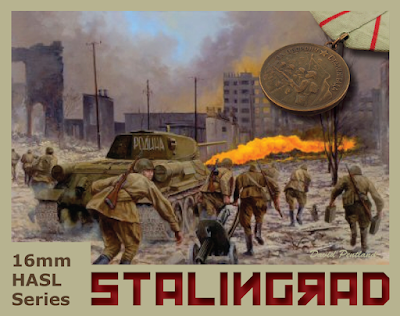 “The [37th] Guards Counterattack,” the first scenario in Squad Leader, sold me on wargaming. It was 1977, and I was reliving a battle fought 35 years earlier. Thirty-eight years later, Stalingrad—the setting for so much cardboard carnage during my adolescence—continues to draw new blood to its gates.
Charlie Kibler’s Red Barricades sealed the deal in 1990. The first historical ASL module broke new ground. Scenarios are played on historical maps of the Krasnaya Barrikady complex, and environs, with the maps themselves based upon contemporary photographs. At the heart of the HASL are three campaign games that occur during the period mid-October to mid-November 1942. Red Barricades is the “sequel” to John Hill’s classic trio of scenarios that take place on 6 October in the nearby Dzerzhinsky Tractor Works. Stalingrad was a huge draw. Indeed, the subject continues to be a massive and inseparable part of the hobby.
The 13th Guards counterattack
Multi-Man Publishing released Tom Morin’s Valor of the Guards in 2007, confirming that ASL officialdom was not done with Stalingrad. The module provides an intimate window into the past. The scenario entitled “The Last Fifteen,” for example, is based upon a first-hand account of an engagement that occurred on 15 September 1942. Captain Gerhard Münch and a handful of his men had found themselves isolated in a building the Soviets referred to as the State Bank. He survived not only the Soviet counterattack, but also the siege that followed. Most men in Die Glückhafte, or Kleeblattdivision, as 71. Infanterie-Division was also known, were not so fortunate—including his orderly, who spent seven years in captivity.1
Fast forward to Cleveland in 2012, where Tom Morin and I discussed the BattleDice that I had created for Festung Budapest.2 Tom wanted to know if I had given any thought to making dice for his module. I admitted that I had.
Traffic jam
At the time, I was hesitant to proceed too quickly. Our 16mm BudaPack had been released only three months earlier, and it was unclear how well these BattleDice would sell given the size and cost of the set. I nevertheless had an outline of how we might proceed. I thought it best to begin with the most recent MMP publications, and work backward. I had no intention of giving every historical module the same treatment. In fact, I had no plans whatsoever to create BattleDice for some out-of-print modules. So it made sense, in theory anyway, to develop a set of dice for Valor of the Guards next.3
Two things got in the way. First, MMP published Decision at Elst. Although it was a Starter Kit module, the subject matter was related to a small project by Lone Canuck Publishing that had piqued my interest. This precipitated a detour, while I designed the “base” set in our Operation Market-Garden series.4 Second, I wanted to create a series of BattleDice for Stalingrad—not just Valor of the Guards. Therefore, before work could commence on Tom’s dice, I had to decide upon an overall scheme for the series.
The divisional symbol of the Wehrmacht’s 389th Infantry Division is striking. It reminds me of a European traffic sign. In October and November 1942, this division was heavily engaged in the Krasnaya Barrikady complex. In Red Barricades, the 389th and the 305th Infantry Divisions form the bulk of the German forces engaged in this sector. It seemed to me that any prospective Stalingrad series ought to include BattleDice representative of these formations. Truth be told, I like the graphic simplicity of the green arrow ringed in red. It is somewhat symbolic of the fate of the German 6th Army: thrust deep into the streets of Stalingrad, encircled, and consumed by the Red Army.
At some point, I resolved to use this “traffic” symbol as a template of sorts for the white dice in the series. Each white die would have a two-tone design. The problem with this approach is that it leaves us open to criticism. Because each element, or colour, of a design is stamped separately by hand, alignment is seldom spot on. For example, it is common for the spots and rings of our “roundel” dice to be misaligned. In light of this, and other technical limitations, I have tried to temper my exuberance for increasingly ambitious designs. But the desire to push the limits is not easily extinguished.
The series therefore consists of an unspecified number of white dice with multi-colour designs, and a minimum of two colour dice, one each for the German 6th Army, and the Soviet 62nd Army. Apart from these basic precepts, I had no hard and fast rules before I began designing the colour dice. However, during development, I did standardize another feature of the colour dice.
Opinion was divided over the value of making rate-of-fire reminders standard on all colour dice. I had added these visual cues to the Arnheim and 43rd Wessex pairs (released in 2014), which, in addition to being compatible with Decision at Elst, were designed with new players in mind. That said, I frequently overlook “rate” shots. I suspect that many new, and not-so-new, players suffer the same affliction. When all was said and done, the absentminded carried the day.
While all of this was going on, Valor of the Guards went out of print.5 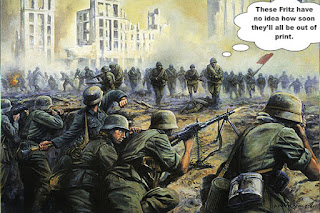 Horses for courses
The common denominator of our introductory Stalingrad set is that each formation fought in the vicinity of the central train station. In order to keep things manageable, I identified the more prominent formations. I arrived at this by tallying the number of times that each formation appeared in the orders of battle of the 25 scenarios published for Valor of the Guards, and more generally by which formations got top billing in the campaign games. The 13th Guards Rifle Division was an obvious candidate, as were the 71st and 295th German Infantry Divisions. Although elements of the 10th NKVD Infantry Division appear in almost a third of the scenarios, these bad boys got the nod based more on novelty than numbers.
Most of my designs are based on tactical symbols and contemporary militaria. The historical material notwithstanding, all designs involve a substantial amount of artistic licence. Much of this has to do with the need to create artwork that is not only discernible at scale, but also that is within the technical limitations of the medium. There is nonetheless a certain amount of art for arts sake. The design below is a good example.
The 295th Infantry Division was raised in Lower Saxony. The divisional tactical sign was a double-headed horse. Not surprisingly, the division was referred to informally as either the Doppelkopf-Division (double-head division), or the Pferdedivision (horse division). While historically accurate, the tactical sign is unremarkable. Numerous divisions in the Heer, or Germany Army, used symbols that were quite similar.

The route taken to create the final artwork is more convoluted than the diagram above suggests. But the main elements, a white stallion on a red field, form the basis of the design. Had I agreed with Mr. Morin, this would not have been the only die with an equestrian motif.
Unusual for German formations of its size, the 6th Army apparently had its own tactical symbol. The yellow creature does not appeal to me, however. More important, I was unable to find any photographic evidence of the unicorn-like tactical sign in use.6 In any case, I preferred to go with the pennant flown on a vehicle transporting an army commander. This variation of the German tricolour was used at division, corps, army, and army group levels. I think that the resulting two-tone design works well on a black die, which in turn works well with the white dice in the set.
The white dice for the Soviet set required a lot more time and effort than their German counterparts. But no die monopolized more time than the one for the 62nd Army. The design that I finally settled upon was the last of perhaps a dozen or so concepts. It is also another example of creative licence. The artwork is a reinterpretation of the Order of Lenin. Lieutenant General Vasily Ivanovich Chuikov’s command was the only Soviet army to receive this distinction, and was briefly referred to as the 62nd “Order of Lenin” Army.7 I hope you approve.

Availability
Our Stalingrad BattleDice are packaged in poly bags as singles and pairs. They are sold in sets of six dice. (German and Russian sets may be ordered separately by email. See our catalogue for pricing.) The sets are sold as is. 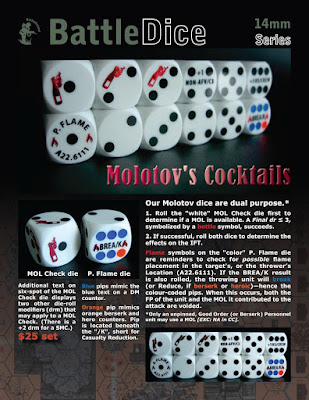 Equine encore?
Are you interested in a set of BattleDice for Red Barricades? How about for the forthcoming module Red October? Do armoured formations, such as 24. Panzer-Division, merit a die? Let us know!
Notes
1. Gerhard Münch (1914-2011) joined the Bundeswehr after the war, where he rose to the rank of Major-General. A series of interviews conducted in 2009 provide some remarkable insights of the battle. A dozen Soviet and German veterans, and close family reflect upon the period, and how it shaped their lives.
2. Coincidentally, I first met Tom in 2007. We were paired for the first round of the New York State ASL Championships in Albany. We played a classic scenario by Steve Swann—RBF-22 “Breaking the Massif,” from Heat of Battle’s Recon by Fire 3. Tom’s experience, and my folly, won him the match.
3. The plan had been to debut the first of our Stalingrad series (and the new Starshell die) in the spring. I wanted to trial the two-tone scheme. If it worked well, we intended to release additional dice in the Operation Market-Garden series. In our opinion, some of the dice in this series benefit greatly from the use of two colours. Finally, we planned to roll out our ASL at 30 Anniversary BattleDice at ASL Oktoberfest in Cleveland. Not much went according to plan, and everything was pushed back to mid-October. The upside, is that there is no shortage of potential ASL-related stocking stuffers this year.
4. The fighting at Elst, and 50 kilometres south at Mariaheide, were separate combat operations, with the former getting underway as the latter winded down. But it occurred to me that if I created a small set of BattleDice compatible with Decision at Elst, the same dice could be used for other engagements during Operation Market-Garden (September 1944). I also reasoned that the white dice in the “base” set could be used with future dice in the series.
I played a minor role in the development of George Kelln’s Hell’s Highway, much less than the charitable credits suggest. The project was in the works long before I came on the scene. I encourage you to purchase this latest offering from Lone Canuck Publishing. At less than $30.00, Hell’s Highway is excellent value for the money. Moreover, it includes counters for Sherman V OP tanks, rocket-armed Typhoons, and a host of German AA halftracks.
5. For those who do not own a copy of Tom’s HASL module, we currently are offering a complimentary set of our Stalingrad BattleDice with the purchase of Valor of the Guards from our KitShop catalogue.
6. I have not ruled out using this symbol altogether. But I would like to find a contemporary example first.
7. Elevated to Guards status (i.e. 8th Guards Army) in April 1943, the army was present during the battle for Berlin, where Chuikov accepted the surrender of General Helmuth Weidling, commander of city’s defence.
Check out our other Specialists here. 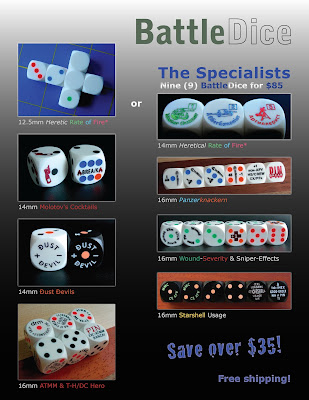