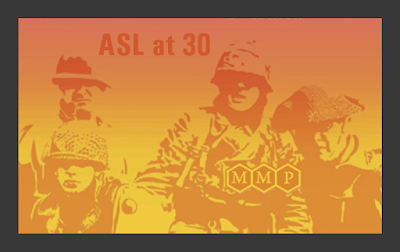 Advanced Squad Leader turned 25 in 2010. The following year, I published a post entitled "The State of the Game: ASL at 25" that reflected on this milestone. A related article, "Happy (Belated) Birthday," appeared in View from the Trenches, Issue 82 (May-Aug 2011). A year earlier, BattleSchool released a second set of BattleDice. Unlike the first set, which was created as a freebie for attendees of a special ASL event hosted by BattleSchool, the follow-up dice were more ambitious. They were designed to commemorate what has remained my favourite wargame since 1985.

Limited edition
When we released 100 sets of "Tommy" dice in June 2010, my wife was worried that we would be stuck with a big bill, and heaps of unsold dice.1 One can only imagine how she felt a month later when I proposed designing BattleDice to mark the 25th anniversary of ASL, especially after I confided that I wanted to produce 250 sets!

The figure was by no means arbitrary. On the one hand, I reasoned that 250 was the absolute limit of what we might expect to sell. Indeed, I had serious reservations before placing the order, and wondered if I was too optimistic. On the other hand, I thought that 250 was a nice number for a set marking 25 years. I also hoped that the "limited-edition" nature of the set would lessen the likelihood that we would be left holding a giant bag of unwanted dice. We need not have worried.

In restrospect, we should never have limited production of what has become the most sought after of our BattleDice. My apologies to those who missed out. While I suppose that we could produce more in the future, I think that this would be unfair to those who purchased a "limited edition." However, I am open to discussion on this point from customers who own the ASL 25th Anniversary set below.

It was with this expereince in mind that I set out to produce a set of BattleDice that would mark the 30th anniversary of The Game. I resolved that we would attempt to make these new dice available for as long as demand warranted. I did not want anyone to feel left out. Nor did I want to create a secondary market in "limited edition" BattleDice.

At the same time, I wanted to give fans of ASL something new, yet reminiscent of the earlier set, with its nostalgic nod to Squad Leader. I briefly considered using an amber die for the Soviets, but could not come up a strong design.2 In the end, I decided to return to the colour scheme used for our inaugural set of Tommy dice. The designs on the white dice are enlarged and reworked versions of those used on the 25th anniversary set, less the dates. I placed "1985-2015" on the six-spot of each white die, where the numerals are more legible. The biggest departures from the earlier set are found on the coloured dice, both of which now feature Rate-of-Fire reminders on the deuce and the trey (three-spot).

I decided early on that I wanted to create a set of dice that recalled the feats of the many rather than the few. For the German pair, the Eisernes Kreuz, or Iron Cross, remained an obvious choice. In contrast to the Knight's Cross featured on the box top of Cross of Iron (and my earlier German die), the new German die displays a 1939 Iron Cross First Class. Because the decoration is so familiar, I dispensed with any additional text. I believe that this has resulted in a clean, straightforward design.3 The Soviet design will appear busy by comparison, but it is actually a simplified version of the real deal.


Order of the Patriotic War
During the Second World War, some 325,000 Soviet combatants were awarded the Order of the Great Patriotic War First Class. The Order is loosely analogous to the Iron Cross First Class, which, coincidentally, was awarded to almost the same number of Germans.4 I took some liberties with the design of the original medal. There was simply too much detail, more than could be conveyed on such a small canvas. I nevertheless felt that it was important to retain the Cyrillic text that translates as "Patriotic War." The Soviet design pairs well with German one, in part because the decorations are roughly equivalent in terms of award criteria. Moreover, the rays in the background of the First Class version of the Soviet Order are gold. This allowed me to retain the silver and gold motive used on the 25th anniversary set.5

October 2015 release
We had planned to release this set in Cleveland, at ASL Oktoberfest. However, as plans go, this one did not survive contact with she who must be obeyed (SWMBO). In truth, our employer could not spare my wife for a week. We released them on 16 October.

Check out our other Specialists here.

Notes
1. To our surprise, the original white, black, and dark-red dice sold out in October 2010.
2. It was just as well, as our manufacturer informed us in August that amber was discontinued.
3. I will admit that I had considered a "sanitized" version of the Cross, but discarded it. It reminded me too much of a "biker cross," or "Motorradfahrer Kreuz." I realize that presents problems for players who live in countries where the swastika is banned. However, the hammer and sickle used on the Soviet die will present similar problems for those in countries such as Hungary, where these communist symbols are illegal. In my defence, neither the Nazi nor the Soviet symbols are particularly large, or prominent. Both, however, remain part of our history. Few question the use of these symbols in other art, especially films. Best to remember that ASL is a game played by many people who were once enemies by virtue of their birthplace.
4. The Second Class of the Order is likewise somewhat analogous to the Iron Cross Second Class.
5. It was a non-starter to use the Iron Class Second Class given that the award is normally worn as a ribbon. And, as it happens, the rays of the Order of the Patriotic War Second Class are silver.

How to buy
Please email: battleschool at rogers dot com for a quote with and without tracking.