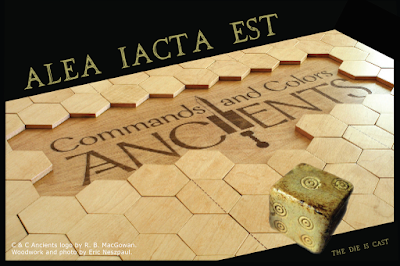 We released our first custom, precision dice in June 2010. Since that time, some of our regular customers have been clamouring for custom dice that they can use with other games in their collections. We have been reluctant to do so for a number of reasons. One reason has to due with the high production costs associated with dice that have five or six different designs. Each design requires its own stamp, or die. These dies are used to apply the foil designs to the faces of dice. The most expensive components of the hot-stamp process are these silicon dies. The silicon die used to make our first set of custom dice five years ago cost us $150.00. Given that we rarely produce more than a couple hundred dice with the same design(s), the cost of custom precision dice can occasionally equal or exceed that of a board game. Before you consider purchasing the dice below, we encourage you to review the section at the bottom of this page entitled “Are BattleBones for you?”
Bare bones
Fashioned from clay, stone, or bones, dice have been part of the historical record for thousands of years.  They have been used to divine the future, to generate random results when drawing lots, and for play. Most dice have indentations, or markings, that indicate the value or effect of a particular face. The Roman die in the photograph at the top of this page was carved from bone. Concentric rings etched into each face serve the same purpose as the “bullseye” spots, or pips, on the older craps die at right. Some dice also have symbols, such as the Ancient Egyptian die below.

BattleBones are ⅝” (16mm) “bare bones.” They are cut from a solid block of white cellulose acetate. Wells that hold the epoxy that serve as pips on precision dice are not drilled. The corners of the die are nevertheless milled to create a “ball-cornered” die. This step creates six circular faces. The surfaces of these circles are ground to a mirror finish. While attractive, the high-polish finish has some practical benefits. The smooth surface is less likely to accumulate dirt, for instance. Foils used to create the designs on custom dice also tend to bind well. The smooth finish even acts as a kind of brake when the die is rolled. Because the entire face of a precision die is in contact with the surface, the effects of friction are more pronounced. Consequently, precision dice are less prone to slide along a flat surface, and tend to come to rest quicker than non-precision dice do, which brings me to my next point. 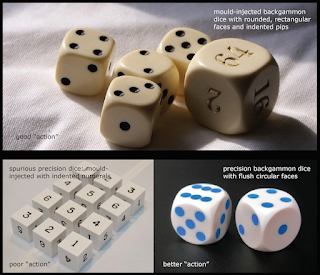 Chosen at random
True, unbiased randomness is the most important attribute of a precision die. Precision dice manufactured to high standards are more likely to provide random results than non-precision dice will. Square craps dice are “perfect” cubes, equally weighted on all sides. Dimensions must be true to 1/10,000th of an inch for a die to qualify as precision. Casinos routinely inspect their precision dice. Any that do not measure up are discarded.
Careful engineering is defeated, however, when dice are not used as intended. Craps dice are not designed to be rolled; they are designed to be thrown. Craps dice are thrown the length the table. To be considered a “fair roll,” craps dice must rebound off the back wall of the table. This is done to ensure that the dice receive enough “action.” It also makes it far more difficult for players to manipulate the roll by “setting” the dice.
Boardgamers generally do not have the luxury of throwing dice the length of a game table. Instead, dice are usually rolled in a tray, shaken in a cup, or dropped down a tower (similar to the 4th-century, Roman artifact at right). Ball-cornered dice are better suited to these applications for a couple of reasons. First, they are smaller than craps dice. This makes them easier to hold—especially when rolling more than two dice at once. Ball-cornered dice also not as prone to get stuck in dicetowers as square dice are. (That said, our BattleBones may not be suitable for towers with narrow gaps between baffles.) More important, rounded corners encourage rolling. Ball-cornered dice therefore provide more “action” than square dice do. This, in turn, provides a more random result.
Colour blind
During development, I briefly considered using 14mm dice. The slightly smaller size would have made BattleBones compatible with more dicetowers, and easier to grip. But I was reluctant to sacrifice even a marginal loss of detail. I also thought about being clever and dispensing with geometric shapes in favour of red, blue, and green pips. This would have reduced the setup costs by almost half. (Tinted epoxies cost more than the white or black epoxies, but there still would have been a significant savings.) However, this would have been a disservice to those with colour blindness—more than ten million men in the USA alone. So much for thinking outside cube.

primus gradus
BattleBones have a geometric shape or symbol on each face, and no pips whatsoever. The first offering in this series has a helmet positioned where the one-spot normally resides on the die. Stamped in copper foil on the opposite face is a standard with the text “SPQR” beneath it. The Latin acronym has no significance in game terms, but does identify the die as “Roman.” With the exception of the black foil used for the swords on the five-spot, all foils are metallic. The weight of these foils is so negligible that no face is favoured.
Proconsul Julius Caesar lost the Battle of Gergovia. He initially had the upper hand. His legions captured important high ground, and laid seige to the fortified town. But his plans unravelled when an ally changed sides, and attacked his supply lines. Although he recovered from this and other setbacks, he was unable to maintain control of the final assault. The governor of Gaul had played his cards well under the circumstances. However, true to the axiom that no plan survives contact with the enemy, Julius Caesar lost control of the battle. Recognizing the situation for what it was—his first categorical defeat in Gaul—he withdrew his battered legions, and resolved to fight another day.
Three years later, Julius Caesar crossed the Rubicon River, the southern boundary of Gaul. The moment he entered Italy proper with his army, he committed a capital offense. He was about to start a civil war from which there was no turning back. Pausing on the northern bank, he is said to have proclaimed, “The die is cast.” And so it is. 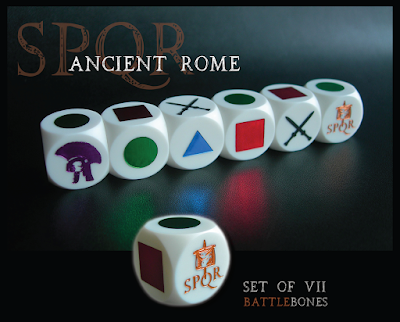 Availability
BattleBones are packaged in poly bags as singles and pairs, but are sold as a set of seven dice. This is the maximum number required when certain cards are in play. Most of the time, no more than five dice are required for Close Combat.


Fleshing out the series
The period from 3500 BCE to the fall of the Roman Empire has no shortage of material to game, as evidenced by the number of expansions for Command and Colors Ancients. In November 2016, we released a new design for Carthage (below). Tanit, the central diety of Carthage, replaces the flag symbol on our new die. The goddess is rendered in red. The crescent moon above her is teal. We used teal (as in teal-blue sea) for the helmet too. We thought the colour suited a maritime power like Carthage.


Tracking available on email orders ONLY.
Please email battleschool at rogers dot com for a shipping quote with tracking.

Are BattleBones for you?
Cost
Production costs are high. Precision dice are labour intensive to produce without the added step of stamping, which, like some steps in the process, is done by hand. Machine-produced, mould-injected dice are much more affordable. Quality, however, tends to be hit and miss. More important, mass-produced dice are not manufactured to high tolerances in order to ensure randomness or balance. Our precision dice are manufactured to the same high standard as craps dice used in casinos. Outside dimensions are true to 1/10,000th of an inch.
Life cycle
Durability is another issue. The foil on our custom dice is only about 10-15 microns in thickness. The foil is therefore so lightweight that it does not perceptibly alter the balance of the die. The downside is that the foil is prone to wear. Metallic foils are particularly vulnerable, primarily because salts from perspiration can corrode them over time. Gentle cleaning with warm water and dish soap after use can retard this process, however. Nevertheless, the soft cellulose acetate—from which precision dice are milled—will itself wear over time. This may adversely affect balance, which is why casinos swap out older dice for new ones before this can occur. At bottom, balance is the most important property of precision dice—the reason they are a premium item. All this is to say that if you are looking for a hard-wearing set of dice, precision dice may not be ideal for your purposes.
Appearance
Although many of our customers have expressed delight at the appearance of our custom dice, some people have been disappointed by the appearance of a particular foil design. Our dice are stamped by hand. So no two dice are exactly identical with respect to the positioning and appearance of the foil design. Moveover, depending upon the pressure applied during the stamping process, a design may have a little too much foil, or not enough. The vagaries of stamping by hand are compounded when a design is comprised of more than one colour. Although this is not an issue with the Roman die, ensuring that a second colour aligns perfectly with the first is difficult to achieve consistently. In other words, we cannot guarantee that the design on a die will appear exactly as it does on the schematics we use for production.