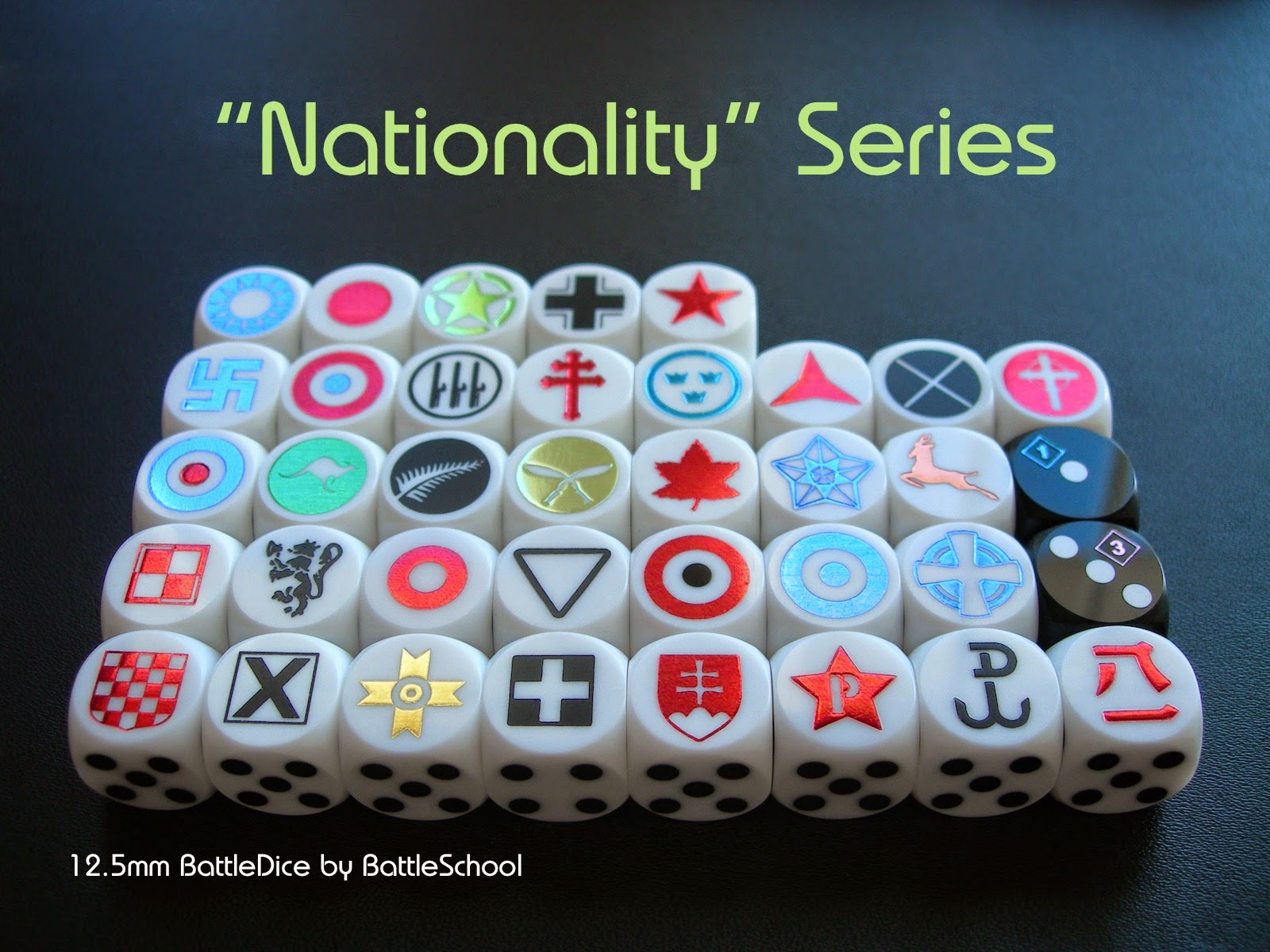 BattleDice are our line of custom, precision dice. We have customized them for use with the Advanced Squad Leader system. Most of our dice are compatible with Squad Leader.


Please note that the prices of all 12.5mm BattleDice will increase dramatically in 2021 due to a roughly 40 percent increase in production costs. Given that a 5-Pack could now retail for $60 or $65, we anticipate a big drop in demand for these BattleDice. Thanks to those who have supported this line over the years. We are sorry to see it go. Naturally, that means that no new designs (e.g. Korean War, generic Waffen-SS, etc.) will be released in this smaller format. (A similar price increase will impact our 14mm BattleDice, which are likewise more labour intensive to produce than 16mm dice are. Although there will also be an across-the-board increase in the prices of 16mm BattleDice, it will not be as significant, i.e., only about a 10 percent increase.)


12.5mm "Nationality" Series
We launched our new 12.5mm (½″) dice series with an East meets West 5-Pack. The dice have simple, yet eye-catching graphics. Perfect for a travel kit, dice cups, and small dice towers. There are two main components of this series: a white nationality die, and a black Rate of Fire die. The black Baby Rate of Fire die is designed to be used in lieu of a coloured die. It has pips on all faces and originally came in two variants (lavender and light-green foil) so that each player had a unqiue ROF die during play. However, there is nothing stopping you from pairing any other coloured die with the white die, which is why we also offer "colour packs" in this series. A Baby Sniper! die complements the Baby (ROF) Tears. 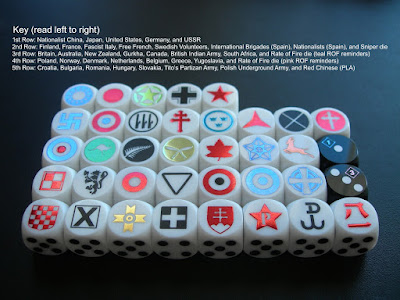 Please email: battleschool at rogers dot com for a quote.


Care and cleaning CAUTION: Do not use solvents such as wood alcohol to clean your BattleDice. A bit of mild dish detergent and warm water is all that you should ever need. We recommend cleaning dice after periods of prolonged use. Cleaning will remove salts, acids, and oils that may corrode the foil, especially the metallic foils such as silver and gold. Do not "scrub" the dice. If you are prone to holding dice in your palm throughout a game, we strongly recommend that you clean your dice after each game. This is particularly important if you suffer from "sweaty palms" during play. We have yet to experience any wearing of our personal dice. However, we only handle them when rolling, and generally leave them on the table when not in use. We also tend to clean them after a tournament, or long day of gaming. Cleaning your dice gently will not only prevent premature wear of the foil design, but it will also restore the jewel-like appearance of the cubes.
Thank you for supporting BattleSchool.

Do you have any estimate of when the nationality 38 pack will be back in stock?

In addition to the 38-Pack, the the Starter 15-Packs will also be available again at the same time.

We had a run on French dice. So we cannot make up a 38-pack at the moment.

The 38-Pack, and the Starter Pack are back in stock.

Greek, Yugoslav, Indian, and South African BattleDice will be in stock next weekend (4 June).