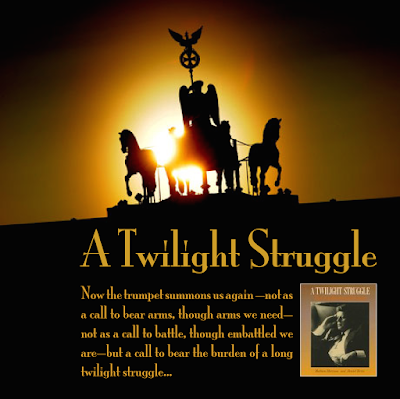 Over the past five years, we have received numerous requests, nay pleas, that we produce custom, precision dice for non-ASL games. We have been reluctant to do so for a number of reasons. It is hard to judge, for example, what sort of market exists for such dice, especially given that the cost of custom dice can occasionally equal or exceed that of a board game. Before you consider purchasing the dice below, we encourage you to review the section at the bottom of this page entitled “Are ColdCubes for you?”
Cold War night life
Members of the Montreal act Rational Youth urged heroes to bring their Harry Palmer glasses, and join the party on the Alexanderplatz. It was 1982. A crowd was dancing on the Berlin Wall. This tongue-and-cheek, yet sober look at the Cold War was a minor hit on Canadian charts. In March 1984, I found myself in the Norwegian far north. (A group of my fellow soldiers found themselves in Finland after they took a wrong turn!) Clad in a Nuclear-Biological-Chemical suit for a week, I never got around to dancing on the Arctic Circle.
For younger generations, the Cold War remains something of a curiosity. Those who have played the highest-ranked game on BoardGameGeek probably have a better grasp than most of the scope and complexities of the era. It is surprising how well this card-driven game models the high-stakes “game” played out between the superpowers for 40 years. Each Bloc was dealt a different hand, and tried to play its strengths. Best laid plans nevertheless unravelled. Chance in the game, as in life, plays an important role. Card draws account for much of this. The other random element is the roll of a die.
Of dice and men
Dice are used to resolve Coup and Realignment attempts. The higher the die roll, the greater the chance of success. In these cases, an original six is the best possible outcome. Dice also determine whether a country is able to advance along the Space Track. But in this case, the lower the die roll the better.

Early in the development stage, I experimented with 16mm (⅝”) white dice with colour pips, red for the guys behind the curtain, and blue for the other guys. The problem with this approach was that some colours—silver, for instance—would be less prominent against a white background. This approach made even less sense after I decided to take the designs to another level—more on this in a moment. 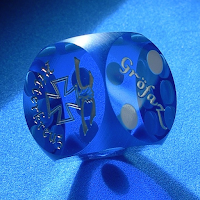 And so it was that I relented, giving in to calls for a set of red and blue dice. With the exception of black and white, opaque cellulose acetate is not currently available in either red or blue. The 16mm dice in this set are therefore transparent dark-red, and dark-blue. The 16mm die in the photograph at right is dark-blue.
Red rockets
About two years ago, when I first considered designing a die for the Eastern Bloc, I considered using a weapon system that was synonymous with the Warsaw Pact. A “Scud” missile launcher immediately came to mind. I wanted the six-spot to generate some emotional impact during play. But as months passed, I gravitated toward a more generic image, one that would tie the face of the design to what was actually occurring on the map board. What I came up with is neither scud-like, nor rocket science. The more hammers and sickles rolled, the more the map becomes populated with red chits emblazoned with these communist symbols. The small gold star, meanwhile, ties in nicely with the stars on the USSR event cards.
I saved the innovation for the one-spot, or ace. Most custom dice have a design on the six-spot. Dice used with Flames of War are oriented this way. Most of our BattleDice have the opposite configuration. What I found intriguing about the ColdCube was that the preferred face was dependent upon what the die was being used for at the time. It suddenly occurred to me that there ought to be some visual reward for rolling low during an attempt to advance in the Space Race. And what better reward than Cosmonaut Yuri Gagarin, the first man in space? 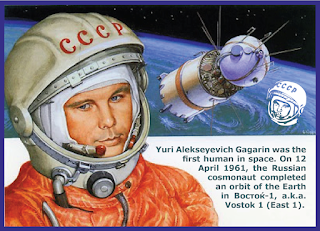 x
It was all fine in theory. But as we had feared, the fickle white foil used for the ace had transformed Gagrin’s visage into an unflattering blob. In fairness, the production team had cautioned me about the detailed design. They also had warned that the cosmonaut would be difficult to render faithfully in white foil. In response, I reduced the detail and enlarged the lettering, for no other colour would work as well as white. It was essential for the design.
Happily, the team lead was able to source a more suitable foil. While not perfect, I think that the end result is a big improvement. In spite of the production delays this setback had caused, I was grateful that we now had a solution. The white design on the American die was dependent upon it. 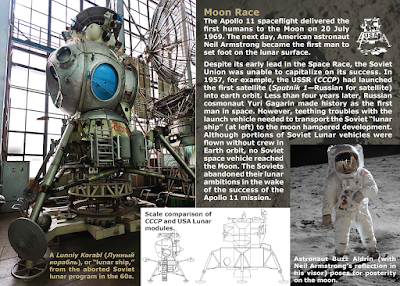 Cold War blues
I had experimented with space shuttles, and men on the moon. My early efforts to create an image representative of an American milestone in the Space Race nonetheless came up short. I finally settled on a lunar module. The artwork may appear busy, but it is far less detailed than my original schematic. I also enlarged the spurious lettering, added as a complement to “CCCP” on the Soviet die. Even if players cannot make out all of the detail, the white foil will alert players that a one has been rolled, guaranteeing an advance on the Space Track.
The six-spot of the American die is the most intuitive of the four designs. Six silver stars double for the six absent pips. Five of these stars enclose the sixth star, and in doing so create a pentagon. The symbolism should be readily apparent, but the spread below should remove any lingering doubt. The stars are intended to mimic the stars found on US control/influence chits. You may notice that the central star is not filled in. This is deliberate. I liked the way this star resembled the “hollow” stars on US event cards. But there was a more practical reason. A solid central star made the pentagon shape less obvious at a glance. 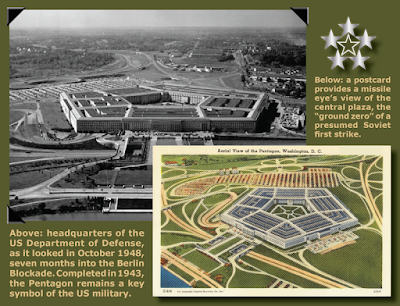 Availability
ColdCubes are packed individually in poly bags, but are sold as a set of two dice.

Tracking available on email orders ONLY
Please email battleschool at rogers dot com for a shipping quote with tracking.


Are ColdCubes for you?
Cost
Production costs are high. Precision dice are labour intensive to produce without the added step of stamping, which, like some steps in the process, is done by hand. Machine-produced, mould-injected dice are far more affordable. Quality, however, tends to be hit and miss. More important, mass-produced dice are not manufactured to high tolerances in order to ensure randomness, or balance. Our precision dice are manufactured to the same high standard as craps dice used in casinos. Outside dimensions are true to 1/10,000th of an inch.
Life cycle
Durability is another issue. The foil on our custom dice is only about 10-15 microns thick. The foil is so lightweight that it does not perceptibly alter the balance of the die. The downside is that the foil is prone to wear. Metallic foils are particularly vulnerable, primarily because salts from perspiration can corrode them over time. Gentle cleaning with warm water and dish soap after use can retard this process, however. Nevertheless, the soft cellulose acetate—from which precision dice are milled—will itself wear over time. This may adversely affect balance, which is why casinos swap out older dice for new ones before this can occur. At bottom, balance is the most important property of precision dice—the reason they are a premium item. All this is to say that if you are looking for a hard-wearing set of dice, precision dice may not be ideal for your purposes.
Appearance
Although many of our customers have expressed delight at the appearance of our custom dice, some people have been disappointed by the appearance of a particular foil design. Our dice are stamped by hand. So no two dice are exactly identical with respect to the positioning and appearance of the foil design. Moveover, depending upon the pressure applied during the stamping process, a design may have a little too much foil, or not enough. The vagaries of stamping by hand are compounded when a design is comprised of more than one colour. Ensuring that the second colour aligns perfectly with the first is difficult to achieve consistently. In other words, we cannot guarantee that the design on a die will appear exactly as it does on the schematics we use for production.
----------------

Cardboard dance shoes
My mother was born in Silesia. She left in 1944, when she was two-and-a-half years old. She has never been back. I have had a soft spot for the track below since 1982, when I first heard it. The quality in the video is no where near that of the album version. But there is a certain charm to this quirky rendition of "Saturdays in Silesia." The video also provides some insight into the equipment used for some of the "cold-war" sound effects on the track. The Cold War would be over less than a decade later. Memories of it linger.

I wanted to ask if they are still available and if the 10$ shipment is also valid for Germany.

Besides that, I´m a bit concerned about your "Life Cycle" comments. I normally play TS face to face games no more than 1-2 times per month. What would be the expectations in terms of durability for your dice with this use?

Hi
Is it Still possible to buy coldcubes for Twilight Struggle ? Best regards

Unless you are playng Twilight Struggle on a daly basis, you should experience no appreciable wear on the foil designs. That said, if you are concerned with wear, you go could wash the dice gently in warm water using dish soap. Avoid solvents like alcohol and keep out of direct sunlight. Extreme heat and cold may effect the epoxy pips, but that is quite rare.

A small number of ColdCubes should be in stock sometime in April 2021.

Hello ! When coldcubes will be available ?

We have a few ColdCubes in stock as of today.