What precisely are precision dice? 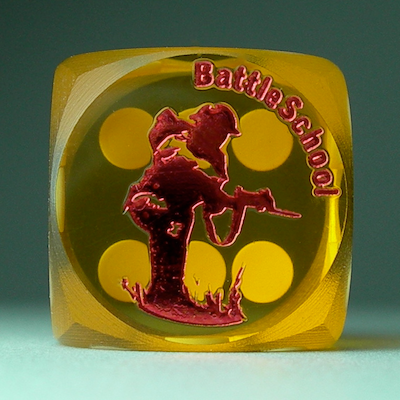 
Precision dice are manufactured this way in order to ensure as much randomness as possible each time they are rolled. Because each side of a die is the same size and weight as another side, a die will not favour any particular face over another. All this is to say that these dice are not unintentionally “loaded,” as some standard dice are—due to poor quality control.

Precision dice are not designed to yield more “snake eyes” than standard dice are. Nor are they designed to yield more “boxcars.” Simply put, precision dice are designed to provide for fair play.
Apart from providing you with a reliable game accessory, we hope that our BattleDice will add some fun to your gaming experience. We put our logo on the one-spot of our first set of dice, partly because this is standard practice for most dice, even on some casino designs. But given that rolling double-ones is usually the best outcome where ASL is concerned, we thought that it would be très cool to roll double bayonets.

Manufacturing process
Precision dice are cut from a block of cellulose acetate. This form of acetate is homogenous and therefore free from minute air bubbles. The cost of the acetate is a contributing factor to the high production costs of precision dice. Holes for the pips are milled out and later backfilled with paint. The paint, technically epoxy, is the same density as the cellulose that was removed. The well for each pip is filled using a syringe. The dice go through several polishing and measuring steps. This process ensures that all surfaces are flush, with no indentations for pips or numbers.1

We asked that the pip for the one spot on some dice be replaced in its entirety with a logo. This does not affect the characteristics of the dice any more than a logo applied around the one-spot or on another face. In fact, some casino dice have a logo on one face, text on another, and a security number on the six-spot.

All designs are made of micro-thin foil. The foil is applied with a hot-stamp process, after the spots are applied, but before the corners of the dice are milled away. The dice are not engraved.

Characteristics
Ball-cornered dice, as used by professional backgammon players, are ideal for ASL and table-top gaming because they:

Other benefits
Precision dice have a few other advantages over standard dice. The flush surface of the die tends to reduce sliding and last-second flipping. In other words, once it lands in a tray, a precision die tends to come to a rest quicker than a die with indented pips. The flush surface is also less likely to accumulate dirt, as the indented pips on a standard die occasionally do. Lastly, unlike a standard die, the pips on a precision die will not wear off. The paint is almost ⅛” thick on the precision dice compared to a few thousands of an inch thick on standard dice. You can distinguish between precision backgammon dice and their non-precision second-cousins by comparing the faces of each die. As you can see in the photographs above and below, the face of a precision die is a circle. On a standard die the face is a rounded rectangle.

Sizes and designs
Bigger dice not only provide a bigger canvas for designs, but also offer an increase in visibility, as the photograph below illustrates. We have released dice in three sizes. The largest size was initially reserved for special dice such as our anniversary dice and our new line of HASL dice. Our main line was supposed to remain the same size as our BattleSchool dice, namely 9/16" (14mm). However, we have had a fair bit of feedback that suggests that more people prefer the 5/8" (16mm) size. We recently released a ½" “nationality” line that features simple graphics on the “ace” of the white die. The matching coloured die for these small dice is a black die with Rate-of-Fire reminders on the ace, deuce, and trey (three-spot). The absence of a matching coloured die reduces the overall cost of this large set.

We have also released specialized D6/2 dice. The number of pips on a particular face represents the final value after dividing by two, and rounding up or down for any fractions. For example, on a fractions-round up (FRU) D6, the five-spot is replaced by three spots, while on a fractions-round-down (FRD) D6 it is replaced by two spots. See our Dust Devils on the 14mm BattleDice page for an example of where these specialized dice are used in conjunction with other D6. This avoids the need to calculate the final result each time. Instead, a player need only sum the pips showing on the dice at the time.

A word about craps dice

Most casinos use 3/4" (19mm) “razor-edge” precision dice for their craps tables. (The slightly smaller 11/16" craps die has apparently been retired.) Craps dice are designed to be thrown by the “shooter.” In order for the roll, or “shot,” to count, the dice must rebound off the far wall of the craps table. Among other things, this ensures that the dice tumble sufficiently. The razor-edge of these dice also works as a “brake” that inhibits tumbling after the dice have struck the wall, ensuring that the dice come to rest as quickly as possible thereafter. However, as precisely machined as razor-edge dice are, they are not ideal for other gaming applications. (Nor are their “feather,” or bevel-edged cousins much better.) If you were planning to use craps dice for board games, miniatures, or role-play games, think again.
The large size of craps dice is an obvious problem. Most dice cups and towers cannot accommodate dice of this size. Granted if you use a large tray or the game table, size is less of a problem. That said, getting your hand around six to ten 19mm dice at a time may be awkward for those playing Flames of War, or Warhammer. A less obvious problem is ensuring that these big boys get enough “action.” Even if you have a large tray, cup, or tower, 19mm dice may not tumble sufficiently to ensure a truly random outcome. Throwing these brutes across your game table is seldom practical either. The sharp edges of the dice may also damage the surface of your dice tray or tower, and will not be kind to felt, or soft leather.
Craps dice are precision dice. But using craps dice in a way that they were not intended to be used defeats the purpose of all that careful engineering. If you want to ensure as much randomness as possible, we recommend that you use a precision die that suits the game being played. Professional backgammon players use ball-cornered dice for some very good reasons. All this is to say that if you are tempted to purchase craps dice, be aware that they are less than ideal for most game applications.

Care and cleaning
CAUTION: Do not use solvents such as wood alcohol to clean your precision dice. A bit of dish detergent and cool water is all that you should ever need. We recommend cleaning your BattleDice after periods of prolonged use. Cleaning will remove salts and oils that may corrode the foil, especially the metallic foils such as silver.


______________
For many years I used the original Beyond Valor dice, they were Red, Blue, Green and White. Using these dice I won quite a few Pvt Rottenroller/Colonel Klink Awards for rolling the most Boxcars over the course of a Tourney...I always said it was because I roll more dice than most folks do during a game....the only problem was, I never seemed to be able to roll a corresponding number of snakes. The most disparate result was at an early ASLOk where I won the Pvt Rottenroller with 88 boxcars, but only had 22 snakes. Something was amiss, but I endeavored to persevere. Once I switched to the Battleschool dice, at the first tourney I used them, I noticed a much smoother distribution of rolls and won both the Col Klink (most boxcars) and Audie Murphy (most snakes) with 58 x 6,6 and 56 x 1,1...this seems to me to lend credence to the Battleschool dice being much more balanced than the ones I previously used. I think Battleschool dice have a bad rep because the graphic is on the 1 spot making a roll of 1,1 much more noticeable to the opponent...who is most often 'harmed' by the roll, and we all remember being diced. If the graphic were on the '6', then I think the complaints would come from the 'owner' of the dice instead of the opponent, and the boxcars would become more memorable as an unpleasant experience in the mind of the roller. If the graphic were on the '3' spot I don't think anyone would think the dice were 'unfair'. 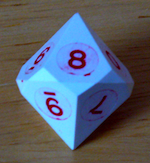 Note
1. In contrast, some manufacturers produce dice with indented numerals. They market these cubes (and various other polyhedrals) as "precision dice." (Red crayon rubbed into the indented numerals of the so-called precision 10-sided die at right.) These dice also tend to have a small lump or proturberance (or occasionally an indentation) where the material used to make the die is injected into the mould. Manufacturers of precision dice for casino and backgammon markets avoid these problems by milling each die from a solid block of cellulose acetate.

Availability
You may purchase precision dice through our Backgammon Dice Page, or by emailing: battleschool at rogers dot com.


Our line of ball-cornered, precision dice is available in 10 basic colours, eight of which are transparent. The opaque, white and black dice are also available with colour glow pips. Dice may b purchased as singles, pairs, or in a variety of design-your-own (DYO) packs ranging from two to 50 dice. We currently stock 12.5mm, 14mm, and 16mm dice. The more popular colours are available in each size. (Special orders—including custom dice designs—usually require 10-12 weeks to process, and involve a non-refundable deposit.) For more photographs and information see the BattleDice and KitShop pages on this blog.
We accept PayPal, as well as international money orders, and personal cheques drawn on a Canadian or a US bank.

Thanks for the write up on your dice. After watching a video on the Internet about precision dice for RPG games, I was wondering why your dice are blemish free. Knowing that they are individually milled has satisfied that curiosity.

I appreciate the art work that goes into your dice, and this was the main reason I was buying them, but to know that their randomness is also of the highest quality further enhances their value!

Thank you for the question.

We are not suggesting that your "vintage" backgammon dice are not precision dice. However, while we do offer white dice with green pips, we are not aware of anyone producing precision dice in opaque green.

That said, the BG Shop in the UK offers 17mm semi-precision opaque dice, including green with white pips. http://www.bgshop.com/index-backgammon-dice.htm

Perhaps in the future, we will be able to release opaque precision dice in a small range of colours. Green would be a natural fit for us. Watch for updates on our BG dice page.
http://www.bgshop.com/index-backgammon-dice.htm