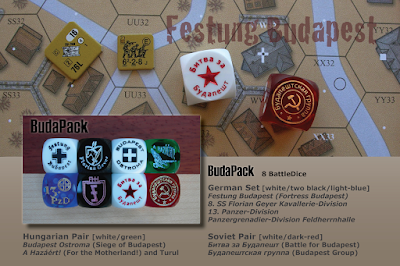 HASL Series - Festung Budapest 1945
In July 2012, we released a set of eight BattleDice designed to enhance your enjoyment of Bill Cirillo's Festung Budapest, a historical module published by Multi-Man Publishing.1 The module proved popular. In three years, MMP had sold out.

Our BattleDice also sold out. So in July 2015, we produced some more. The designs have not changed, although a few of the colour schemes* have. The dice are also available as pairs. Or buy a BattlePack, which includes Panzerknackern, Sniper-Effects and Wound-Severity, and Starshell Usage dice, eleven BattleDice in all.

Note: The German set differs from the original set in three ways. First, the foil on the Florian Geyer die is now silver (instead of white). Second, the FHH die is now black with pink foil (instead of blue with red foil). Third, the 13. PzD die now comes standard in light-blue [EXC: a few dark-blue 13. PzD dice (with gold foil design) are available for substitution]. A limited quantity of dark-blue FHH dice (with red foil design) are also available for substitution.

The Turul (on the green Hungarian die) is a giant, mythical bird of prey. It is an important cultural symbol of the Magyar, or Hungarian people. The bird is often shown clutching the Sword of Attila—the legendary weapon of Attila the Hun, and both remain central symbols of the Hungarian military to this day.

1. KitShop has a few copies of Festung Budapest in stock. Email battleschool at rogers dot com to get access to our current ASL catalogue.