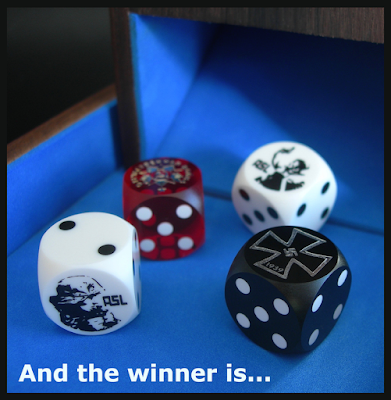 Congrats to the winners. It was great learning more about each of you the fantastic way that only Mr. Doary does it!!!

Oh Wow! Thank you, this was really unexpected. Love the dice!

I bought ABtF a few years back on eBay on one of those red-eye-hit-the-bid-button-at-the-right-moment deals and I am so glad I did. We have now finally committed to it and also have a dedicated play area so we can take a break and not have the cat or the kids destroy the scenario.

Thanks for the generous praise. You get bonus points (or maybe an extra die roll in our next contest) for spelling my name correctly. ;-)

Thanks for playing along. Great score on eBay. I don't own copy of ABTF, but have played a bit of one CG, and a few scenarios thanks to others who do own it.

Nice to hear that you and Stefan are already connected with Neil and Lance. No doubt, there are others hiding under a rug somewhere.

The tupperware was all Pharmbouy Wilson's idea. Even with all the heroes, I still lost Trap @ Targul Frumos to to the Enigmatic Dr. Snow......

Wow, that's an old scenario from Rout Report. IIRC, Martin Svärd did a scenario set in Târgu Frumos in Friendly Fire Pack 5. FrF41 Romanian Mare, if memory serves, only it is between the Romanians and the Russian in April '44, rather than May.

Wow! I've been coveting the BattleDice of Wolkey and the Wirthlin brothers for a while now. Now I'm totally stoked to be getting a set! Thanks for the generous prize Chris. I love your site and I'm sure I'll be loving the dice too.

And to reiterate what was said in the article. I am extremely lucky to have such good players and good guys to play ASL with face to face here in Spokane WA. That's been the best part of getting back into the hobby for me. I've met some cool people and made some friends.

Pleased to hear that you and your new BattleDice are/will be in good company. Having a local community of ASL players is not something that we can take for granted these days.

Our January delivery arrived too late for the NWASL tourney last month. As a result, Jeff and Rob did not receive their BattleDice prizes. Given the way that things worked out, would you mind if we include their prizes with yours when we mail it later today?

All the very best,

No problem. Go ahead and throw in the brother's prizes. I'll make sure they get them.

The prizes are on their way to you.

Have a great weekend!

Chris, I love these columns. It's so cool to learn about these players from all over the world. I recently received a pair of your battle dice when I ordered Poland in Flames through ritterkrieg...they look great, and fell great - all of your dice have a great look. Best regards to you, and your readers.

Thanks for the feedback Mike.

I am pleased to hear that our raffle-biographies are resonating well with others. In that sense, everyone wins. Well, except for Jazz, that is. Even with wonky dice on his side, he has hist work cut out for him when locking horns with the good Dr. Marty Snow. :-)

I am likewise pleased to know that a pair of Polska BattleDice have found a good home, and an ideal match in Poland in Flames. Roll eagles! Hurra!