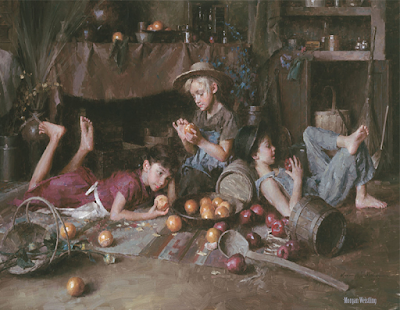 Notes
1. The quintessential Ontario apple, the Mac dates from 1811. Like many of today’s popular apples, the fruit tree was the product of a chance seedling on John McIntosh’s farm in Dundela, Upper Canada (Ontario)—less than 60km from where I now live. The apple is mildly tart when first picked, but sweetens as it ripens. Jef Raskin apparently named Apple’s line of personal computers after this historic variety.
2. According to Wikipedea, “the first Gala apple tree was one of many seedlings resulting from a cross between a Golden Delicious and a Kidd’s Orange Red planted in New Zealand in the 1930s by orchardist J.H. Kidd.” In 1977, Hendrik Willem and Ten Hove discovered a new variety in an orchard in Matamata, NZ.  Coincidentally, Dale Drake—whom I have had the pleasure to play ASL with several times via VASL—now makes his home in Matamata.
3. In the late 80s, the oldest game store in Ottawa still had bins stuffed full of out-of-print copies of Strategy & Tactics, SPI’s flagship publication.
4.  Bryan also won a prize in our December 2012 raffle.
5. Cochrane’s Dairy Ltd., a family operation in Russell, Ontario (about 30km east of my place), still delivers milk to your door, in glass bottles, no less. Helen occasionally picks up a bottle at our local butcher.
6. It is possible that this early “eau-de-J” came to us by way of Orange County, California. However, the majority of California’s Valencia crop was usually sold for eating rather than drinking.
7. In the 1860s, an English nursery imported citrus trees from the Azores Islands. Some of the trees exported to the United States found their way to California in 1876, and Florida in 1877. At the suggestion of a Spanish visitor, who noticed a resemblance to a late-maturing variety in the region of Valencia, the trees in California came to be called Valencia Late. Not until the early twentieth century did it become clear to growers in Florida that they were cultivating the same variety. The Valencia would become the most important juicing orange in the USA. The variety is also important in Algeria, Australia, Brazil (where a good deal of orange juice sold in Canada and the States comes to us via supertankers), Israel, Mexico, Morocco, and South Africa. The “Azores” Valencia should not be confused with the Valencia Temprana grown in the Valencia region of Spain. Robert Willard Hodgson, “Horticultural Varieties of Citrus” Division of Agricultural Sciences, 1967.
8. Aside from making excellent marmalade, the juice of Seville oranges makes a zesty base for a salad dressing. We have tried this a couple of times. It takes practice to find the right balance, but can be worth the effort. My wife also likes to add blood oranges to our salads, and carbonated pomelo soda is a summer favourite. And, at the moment, there is a jug of freshly squeezed Valencia oranges in the fridge, alongside a bag of limes that Helen ostensibly bought to make Iranian stew. I suspect that there is a link between the limes and the bottle of Patrón Añejo that she put on the counter yesterday.
9. Technically, many Valencians speak Valencian, which is almost indistinguishable from Catalan, at least to most non-native speakers.
10. For the ultimate—Guiness World Book of Records—dice collection, check out Kevin Cook’s site. It is crammed with over 50,000 dice from around the world.
Posted by Chris Doary at 17:03

Thanks! I really love those dice. They'll go great with my Elst module. I didn't realize I got on board so early. I just remember really pouring over your articles when I first started playing.

Congratulations on four years of being such a valuable asset to the hobby, and here's to many more!

Congratulations on turning 4! Your starter kits articles helped pull me into the hobby, I'm just graduating onto AFVs with starter kit #3 but I also had my first full ASL game the other night and I had a blast! We played the classic The Tractor Works and I was amazed at how much the starter kits give you the core of the main game. By far my favourite new rule were the snipers, they are a fantastic abstraction and add a lot of fun and flavour to the game, so now I'm eyeing up your sniper dice. Do you have a UK distributor?

Many thanks for your contribution to the hobby, I'm always gobsmacked by the passion and friendliness of the community.

Chris, thank you very much, as I supose you know, I will pick the option three. I will gift them in Barcelona and Madrid. Many thanks by your support to ASL and its players.

Thanks for the feeback guys.

It is good to hear that some of what I write is actually useful. Let me know what you think of the recipe for agua de Valencia. ;-)

Seriously, thanks for the kind words. My hope is that my articles on Sitrep will encourage new players to persevere with ASL, and help keep players engaged with the hobby. I realize that ASL is not for everyone. But in my experience, too many people give up on it after trying to go it alone. There is big, friendly, global community out there. Do not be afraid to reach out to other ASL players, no matter where they live. You will often find that they share other interests, be it miniatures, or another era such as the American Civil War, or Napoleonics.

Share in the fun, as Jose Tomas has done.

Oh, and the prizes are packed and will ship today. :)

Always love you catalog and dice!

Yes, thank for everything and congrats on 4 years. Many great articles, but your what to pack for CASLO article deserves special attention. It made me feel much better about my first tournament trip.

Thanks Ron. Good to know that the catalogue is useful, and always pleased to hear that someone likes our BattleDice.

Thanks for dropping by. I don't know how applicable the CASLO Toolkit article is to other tourneys. http://asl-battleschool.blogspot.ca/2011/09/caslo-toolkit.html

But when I put it together, I tried to include enough general material so that players attending their first tournament would have some idea of what to expect, and what is expected of them. I try to do this with most of my post, namely include information of longterm significance.

Sorry I never made it to the CASLO in Montreal when you did. But I'm sure we'll meet at a future tourney, or game day, perhaps in TO.

By the way, have you had a chance to get together with the newly formed ASL Club in the GTA? I think there are about 20 guys in it so far. You have the critical mass necessary to host the CASLO in the future. I would definitely show up for that.

Just to back up what you said, "yes," your articles on Sitrep encourage new players like me to persevere with ASL. Thanks for your continued effort, and as always, I'm looking forward to your next blog post.

Great to hear from you. Nice to see that the Canadian contingent in Japan still carries the ASL torch. :)

Will do my best to get another post out in the ASLSK series. (A partly completely article focussing on the Beyond the Beaches Bonus Pack has been gathering dust for about nine months.) At the moment, however, I am working on an article I promised someone three years ago! As with a bunch of other partially completed projects, it is long overdue for publication.

Thanks for reading. But most of all, thanks for the words of encouragement!

Hi Chris, the dice arrived perfect, I have talked with Miguel, tournament director of Fanatic and one pack will be a price for the winners, the tournament will take place in Barcelona 24-25 October.

That is very kind of you to share your prizes. But I have to wonder if you are not planning to win Fanatic XVII. ;-)