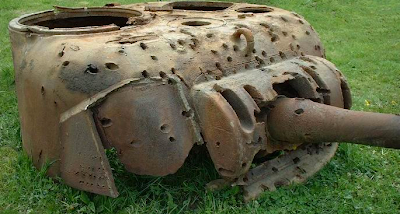 Are your turret counters looking a bit worn? Well I have some good news. The British are coming! And as it happens, so are the Americans. The elves at Countersmith Workshop have released a new set of counters. Steelmaster Module B is the second in a line of turret counters compatible with the ASL system. Module B contains counters for US and “British” AFV armed with a turret-mounted weapon.
Like Module A, which included German and Russian turrets, Module B boasts a comprehensive set of turrets for the entire American and Commonwealth orders of battle (as found in chapter H of the ASL rule book). The set also includes extra turrets for those AFV equipped with Gyrostabilizers.
Module B consists of three sheets of 9/6” (14mm) counters. The counters are a couple of millimeters larger than the generic white ASL turret counters. This is not a bad thing. The larger size provides more room for the plentiful turret statistics, yet remains small enough that the turret does not obscure the AFV underneath. Countersmith also includes a black-and-white version of the user guide above with each module. The guide explains how to interpret the various symbols and colors. For instance, red is used to show that a vehicle is Buttoned-Up (BU). 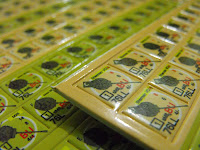 In a welcome departure from Module A, this latest set of turrets is printed on a heavier weight of card stock. Aside from being noticeably thicker, these latest counters have a slight glossy finish, similar to standard ASL counters. The finish is supposed to make the text more legible.

Availability
The BattleSchool KitShop may have Modules A and B in stock later in 2015, if demand warrants. 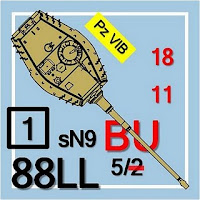 If you are unfamiliar with Countersmith turrets, I recommend that you read the summary of benefits below. I have paraphrased the manufacturers' claims, as published on their blog.

Benefits
The turret counter displays the adjusted Armor Factor (AF). There is no need to calculate the actual AF of a superior or inferior turret. For instance, the Pz IIIF has an AF of 3. However, because the front portion of the turret has inferior, or thinner, armor, its AF is actually 2. And because the sides and rear of the turret have superior armor protection, the actually AF of the turret sides and rear is 4. Countersmith believes that displaying the adjusted AF on the turret counter not only saves time, but also avoids any confusion with regard to the symbology (squares and circles) used on the AFV counter.

Each turret has a crew-exposed (CE), and Buttoned Up (BU) side. This allows players to ascertain at a glance which weapon systems and smoke dispensers may be used in a particular state. For example, while the M4A2/76 below is BU, the anti-aircraft machine gun (AAMG) cannot be used, signified by the red strike-through on the AAMG firepower (FP). There is also a handy reminder in the form of an arrow beside the Smoke Mortar number (sM8). The arrow indicates that the sM may only fire through the turret covered arc (TCA).
The turrets are designed to speed up play by reducing or removing the need to consult the back of the AFV counter, or the vehicle notes in the rule book. For instance, it takes only a moment to check the M3 Lee turret below to determine that the AFV may fire its AAMG whether CE or BU.

The turrets minimize bookkeeping. Each counter set includes additional turrets that represent AFV with optional equipment such as Gyrostabilizers and Schuerzen (Sz). For example, Module A includes two sets of turret counters for the Pz IVF2, some with Sz, some without.
The turrets address limitations within the official ASL counter mix by the addition of turret counters with an optional AAMG, and/or rear machine gun (RMG). Countersmith also provides a better means of representing Dug-In AFV and Armored Cupola.

Finally, Countersmith adds a number of turrets for AFV variants not found in the official counter mix. The T-34/57 M1941 is but one example. The Soviets produced more than 300 of these tanks during the war. Apart from participating in the Battle of Moscow in 1941, some were used as late as 1943-44. The T-34/57 shared the same hull as the more numerous T-34/76. The Countersmith turret below allows players to “convert” a T-34/76 into the T-34/57 variant.
Posted by Chris Doary at 20:23

This is very cool indeed. I have been living under and ASL rock for the last 10 years and this makes so much sense! Most likely my next purchase!

Thanks for the link to the Division West ASL Club in Albuquerque, New Mexico. Had a look at some of the club pics. Will have to post some photos of our club get togethers here in Ottawa.

Good luck in the raffle on 1 February. Maybe you will win some turrets in our next draw. ;)

Any idea when Module C and beyond might be available? Really have been loving A+B....

I emailed Warrick at Countersmith, but have not heard back yet. Will let you know what he has to say after he gets in touch.

Hi all. Anyone know what was supposed to be in the Module B set? I have 4 sheets of exactly the same counters. Seems odd - and no response to email queries sent to CSW. Matt Z

I emailed a couple guys in Hong Kong a while back. Neither could tell me much about the status of Countersmith Workshop.

Wrt your question about Module B, you scored! It should contain three (3) counter sheets. All of the sheets are identical.

I gather that this was done to reduce costs. The difficulty I have with it is that it leaves us without turrets marked C-F. Otherwise, everything should be there (EXC: the AWOL counters mentioned in the post above. -Chris

I spoke with the guys at Countersmith. There are no plans for additional modules.

If you were lucky enough to grab the German, Soviet, American, and Commonwealth turrets, you have them all.

Great Chris. Thanks for the update. At least they are still around. I'm trying to get a copy of Module A. Module B will follow, but I am just trying to get Module A first. The hard part is either getting ahold of them or attempting to find their AFV turret counters elsewhere (Noble Knight).

I'd love to hear your response. Thanks.

Thanks for reading, and posting the question.

We do not have any complete sets left. (Sold last two unpunched copies of Sheet 4 US/CW yesterday.)

Recommend that you try Derek at Ritterkrieg. See link under "ASL à la carte" on the left-hand sidebar (not visible on some mobile devices, although iPad works.)

Thanks. I'm already on to that. Appreciative of all this, Chris. I know I'm trying to artsy my ASL up some, but it seems pretty neat.

That's neat that you sold some Countersmith Workshop products yesterday. Sounds like maybe a good sign for me.

Derek is clearly making an effort. Thanks

Wow, how happy am I that I asked when I did if you had any of these Allied Sets left in stock? I think the two sheets you had left should be more than enough. I did notice recently that Critical Hit is now producing Turret counters as well if anybody is interested. Super SHOUT OUT! to Chris and Sitrep for all his help in acquiring this. Love those Battle dice as well. I'm getting quite the collection. Need to finish getting the rest of the Baddies;-)

Thanks for your support, and kind words of praise. Happy clipping, and roll low!