KG Scherer: the Shield of Cholm

Le Franc Tireur (LFT) has announced the release of their new historical ASL (HASL) module depicting the siege of Cholm, or Kholm. The siege lasted more than 100 days, beginning with the Soviet encirclement of the town in January 1942. Kholm is a small town in Russia, situated at the confluence of the Lovat and Kunya Rivers, some 100 kilometres north by northeast of Velikiye Luki. 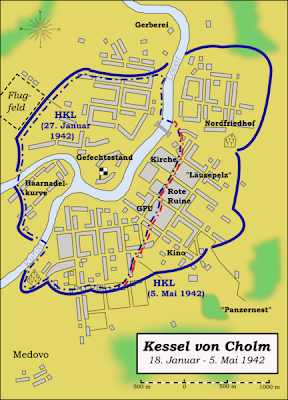 Below is a contemporary sketch of the cauldron by Polizei-Rotwachtmeister Schlimmer, of Reserve Polizei Battalion 65. A talented artist, he also co-designed the Shield of Cholm. 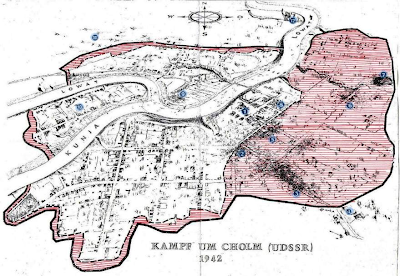 Legend
Compliments of Andrew Hershey
1. The “Judentempel” drew repeated artillery fire because the Soviets suspected that German forward observers were using the building to call in artillery. Judentempel is a term coined by the Germans within pocket to describe a former church. Before the Russian Revolution (1916) the building was known as the Church of Christ’s Appearance. By 1942, however, the structure had undergone dramatic renovations, including the loss of its bell tower and much of its classical façade, although its rotunda remained. These alterations left the exterior of the building looking somewhat like a synagogue, hence the name “Jewish Temple.” In any case, it is doubtful that the building actually was a synagogue during the Stalinist period. (That said, the 1926 census lists 103 Jewish inhabitants in Kholm, as the Russians called it.) This imposing stone structure dominated a portion of the town centre. The building features prominently in several of Richard Muck’s photographs in the slide show above. The circular roof is an unmistakable landmark.
2. The GPU prison was a key defensive position in the eastern portion of the town. It was here that Hauptmann Albert Biecker earned his Ritterkreuz on the 20th of March. And it was also here that Beicker would be killed on the 1st of May, only a few days before the siege was broken.
3. Das Kino (cinema) was one of the main Soviet staging areas for attacks against the prison.
4. The “Alte Panzernest” (literally old tank nest) was an area where Soviet armour routinely formed before attacks against the eastern part of the town, especially the prison. The “Neue Panzernest” was located farther east in a forested area, as the old staging area came under increasing German artillery fire directed from the prison.
5. The “Rote Ruine” (red ruins) was a place of savage fighting that changed hands several times during the siege. It was a popular hide for opposing snipers. The nickname is a reference to fine red dust of pulverized bricks that blanketed the buildings, rubble and debris of this block.
6. “Der Lausepelz” (lice pelt) was a collection of wooden buildings that were eventually rubbled. It was a prominent Soviet position, and a jumping-off point for infantry assaults.
7. Der Nordfriedhof (northern cemetery) was a heavily fortified area, and the scene of see-saw fighting. When in Soviet hands the nearby church tower served as an artillery observation post. By May, the church was no more, having been battered by artillery, and finally consumed by fire.
8. Kirche im Osten (literally church in the east) was used as an artillery observation post by the Germans. It was also an important defensive position in the eastern portion of the pocket. The crypt of the church was, for a time, the battalion command post of Hauptmann Heister, commanding officer of III Battalion, Infanterie Regiment 386. Like most of Cholm, the church lay in ruins by the end of the siege.
9. The final headquarters of “Kampfgruppe Scherer.” The first HQ was located on the east bank of the river, but was abandoned when the Soviets threatened this sector of the line.
10. Die Haarnadelkurve, or hairpin curve, was the primary drop point for supply containers. The main field hospital and ammunition dump were located here, in the western part of the town.
11. An improvised airstrip where Junker 52 transports and Gotha 242 gliders landed. The strip was located in no-man’s land.
12. The Tannery. Once the Russians secured this building complex, they used the larger building as an artillery observation post. The complex was also used as a staging area for some attacks on Cholm.
The outcome of this oft overlooked siege would have disastrous consequences for the German 6th Army at Stalingrad later that year. The small German force of mostly second-line troops and security forces in Cholm was able to hold out by receiving just enough supplies by air. Luftwaffe transports and gliders suffered heavy losses, however. Ecstatic that the garrison had held out until relieved in May, Hitler commissioned a special award for the survivors: the Shield of Cholm. Their heroic stand would lead Hitler to insist on more and more of his soldiers holding their ground instead of sensibly withdrawing when faced with imminent encirclement by the Red Army. 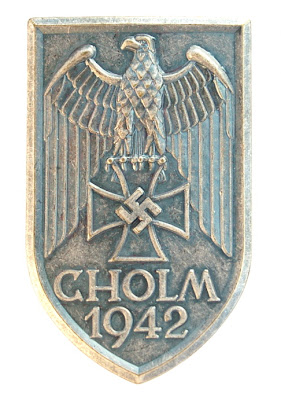 Veteran designer Andy Hershey recreates the siege of Cholm in a way never attempted in any previous HASL. Because the battlefield changed so much during the course of the siege, and because the landscape was transformed after the snows melted, the module comes with winter and summer (technically spring) maps. However, this is not simply a case of painting one set of maps white. On the contrary, the terrain on each map set differs due to the accumulated destruction wrought by artillery and combat.
The module includes a historical booklet that contains some of the original research undertaken by Andy and his collaborators. A nice touch is the counter sheet. In addition to special counters such as ammunitions dumps, it includes Infantry counters in winter camouflage. 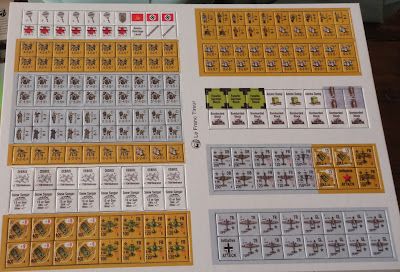 In June, I ordered copies of this innovative HASL from Xavier Vitry, the editor of LFT. I hope to have them for sale in our KitShop sometime later this month, or early August. Several people have already pre-ordered copies.
As an aside, Xavier kindly donated a copy of Kampfgruppe Scherer: the Shield of Cholm as a prize for the Canadian ASL Open (CASLO) in September. The winner of the CASLO will take home this marvelous new release from Le Franc Tireur. Copies also will be for sale at the tournament.


Here are some books dealing with Cholm. Besieged: the Epic Battle for Cholm by Jason D Mark is the most recent study of the battle. 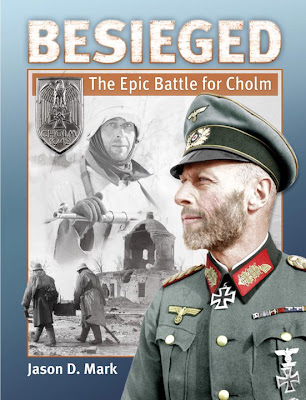 Arguably the best contemporary source was written by Kriegsbereichter (war correspondent) Richard Muck. He was flown into the pocket (Kessel) in March 1942 at the behest of Generalmajor Scherer, the commander of the German forces trapped in the pocket. Muck was a member of a propaganda unit and subsequently published a book on the battle entitled: Kampfgruppe Scherer: 105 Tage im Kessel von Cholm (105 Days in the Cholm Cauldron). The book is hard to find, but is available on Amazon in Germany. Incidentally, each survivor of the siege received a copy of this book, in addition to the Cholm Shield. The book was originally published in 1943. 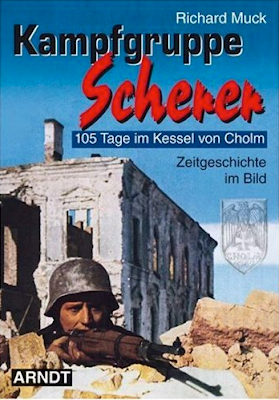 Circle of Fire: the Epic Battle of Cholm (left, and bottom centre, with no image) is an anglicized version of Muck's work. It features photo captions in English, and added commentary drawn from other contemporary German sources. This commentary provides more detail on each month of the siege.


There are additional works on Cholm, but most are either in German (including a history of 329. Infanterie-Division, an ersatz formation), or of questionable value. The McTaggart book below includes a chapter on Cholm. I consulted this book for another project and found it to be fairly generic with not a lot of specific tactical detail. It does offer a good overview, however. I found it in my local university library. I recommend that you do the same. The last book is a historical novel. The fellow who runs a "walking the battlefields" blog recommends the book. The link below does allow a sneak peek inside the book. Thanks to C. Dawson for the tip. He managed to find a copy for $4.00, shipping included!

this looks like an AWESOME product and in spite of the cost I can't wait to get this one. I had never even heard of the battle until some of the prepublication hype on gamesquad led me to read a bit online.

I was aware of the siege. I have something on it somewhere in my library, but a quick look just now turned up zip. It's buried in a more general book on the Ostfront. Just cannot recall which one. Unfortunately, Cholm hasn't received a lot of attention in the historical literature, at least in English. The following site provides a bit of an overview, although I cannot vouch for its accuracy: http://www.theeasternfront.co.uk/battles/cholmpocket.htm

The second link is to a blog of a fellow who has walked the battlefield. Be sure to check out his extra Flicker images of Cholm, as well as his index of other battlefield visits. He's done quite a few.

Of course, the KGSSC comes with a historical booklet that will provide a much better overview of the siege, not to mention the new book Besieged. I'm looking forward to both. I have yet to buy myself a birthday book. :)

Thanks for mentioning the walking the battlefields site. The blog entry for Cholm, mentioned "Russ Schneider's excellent semi fictional account - 'The Siege: A novel of the Eastern Front'", which takes place during the siege of Cholm. Just ordered it for $4.00 online with free shipping! Hope it is as good as the blog says.

How much is the module?

I'm not sure how much the module will be until after we factor in shipping and duty. Our order (which also contains FTC6 and other LFT publications) shipped from Cambodia (Kampuchea:) a couple days ago.

However, depending on where you live it may be more practical to purchase the module from another vendor. In Europe, it is 72 Euros from the LFT website. In the USA, Scott Blanton (Gamer's Armory) is taking pre-orders on his site, but I didn't see a price last time I checked. Alex Key is also getting in a small number of copies. I deal with both on a regular basis. Both are terrific guys, and both have a reputation for good prices and service. If you need their contact details, let me know.

Once we receive our shipment, we will calculate our costs and post our KitShop price in an update. Shipping is the big kicker on this one. At the moment, we have about 15 copies on the way that are not spoken for. If someone would like to reserve one--with absolutely no obligation to purchase--please email me direct at battleschool@rogers.com

Looking forward to this one.Know some folks concerned about the cost of the module,but I ordered my copy as I think LFT's quality of their ASL modules is outstanding.

I rcvd my copy from Gamer's Armory the other day and am 100% pleased so far. The Winter map is beyonf compare and sets the benchmark for HASL winter treatments so far.

Look forward to playing it.

Excellent ChrisB, what scenarios have you played so far? I am going to be doing a write up of a scenario in the spring. Let me know if you have a fave.