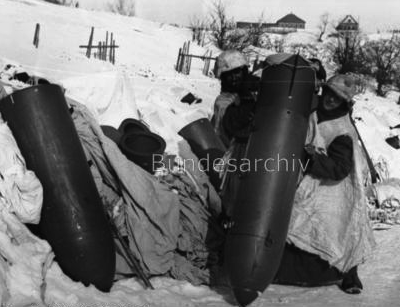 Kampfgruppe Scherer: the Shield of Cholm (KGS) has arrived. We have let everyone who pre-ordered a copy know. Now it is time to let the rest of you in on the secrets.
First, I must say that I am particularly impressed with the historical and rule booklets. Both are printed on the same high-quality stock that Le Franc Tireur (LFT) uses for its magazines. The historical booklet is just over 50 pages. In addition to before-and-after photographs of the siege, the booklet is littered with contemporary photographs, mini biographies of key Germans, maps, aerial photographs, orders of battle, and colour illustrations. Much of this material has been provided by researcher Dirk Burgdorf, who has conducted extensive on-site research of the battlefield. He has also interviewed a number of veterans of the battle, including Iron Cross First Class recipient Joachim Dettmann. Leutnant Dettmann won his Eisenkreuz while serving as an artillery observer during the siege. There is also a 13-page excerpt from Jason D. Mark’s history: Besieged: the Epic Battle for Cholm. The historical booklet is a treasure trove of detail that adds considerable value to the module.


On time, on target...
Air dropping supplies is fraught with problems. Even if the load is dropped on target, the supplies inside the canister can be damaged. This was the case with some of our KGS modules that arrived today.
I opened the box that appeared to have the most damage, and checked the contents. The picture above shows part of the contents of this box. Nothing inside showed any significant damage. The historical booklet, for example, has some crimping on the top right-hand corner (about 2 mm). Some of the counters have come loose from their tree, but this is not unusual with LFT counter sheets—their punch is extremely sharp! The maps, overlay, and various cards were undamaged. All in all, much better than I had feared.


As an added incentive to purchase a copy of KGS from our KitShop, we are offering discounts on other LFT products. These discounts apply even if you purchase a damaged copy. Below are the regular and discounted prices for a number of LFT scenario packs and magazines. Although we also stock From the Cellar 4: the Russian Civil War, and Operation Chariot: the Raid on St. Nazaire, we regrettably cannot offer a discount on these publications at this time.


UPDATE: 21 July
I just wanted to let everyone know that Xavier Vitry, the editor of Le Franc Tireur, has been very supportive and understanding with regard to the unfortunate "canister drop." I also wanted to reiterate that there was very little damage to the contents of these boxes.

From the Cellar 6
This is the latest LFT scenario pack. As the cover teasingly suggests, the scenarios are all short, four-to-six turn actions that can be played in less than four hours. I have played four of the ten scenarios in the past three weeks. The longest took about four hours to play. So far FT165 Shopino Struggle and FT167 Wasp Sting have proven the most popular. I also thought that FT163 The Price of Persia (Iranian versus  Indian troops) was a good scenario for teaching new players the basics of Infantry combat. One of the scenarios—an all metal bash—features six French armoured cars in a whirling battle with eight panzers. It is another good candidate for a “training” scenario. In sum, there is a lot of variety in the pack.

From the Cellar 5
The rat brings us another mixed bag of scenarios, 14 in all. The pack comes with two articles on the battle of La Horgne, which takes place in France in May, 1940, and a mapboard (LFT2). Noted British historian and ASL player Ian Daglish penned one of the articles. In addition to the four early-war scenarios in France, there is a rare scenario using Steppe terrain. A PTO night action (one of two night scenarios in the pack) uses the mapboard that comes with LFT11 (see below). There is a cool match up between the Red Army and an allied force of Italians and Germans: FT152 Avanti! FT158 Close Combat Teams sees a dug-in Japanese force defending against a combined arms Russian assault that uses the board that is included with this pack. If you love late-war armour, FT157 The Lost Column may be for you. The Canadians are hard-pressed in this one. They need to fend off a company of the 12th SS supported by Panther and Tiger tanks. There are plenty of medium-sized scenarios in this pack. Finally, one of the smallest scenarios uses the Spanish counters that come with LFT10 below, although standard German counters work just as well in this Ostfront firefight.

LFT Magazine 12
An 80-page magazine with an emphasis on the Pacific Theatre of Operations (PTO). It includes ten scenarios and a (corrected) board LFT2. Given the theme, subjects include an overview of Japanese characteristics in ASL, PTO terrain, and a how-to article on sea-borne assaults. One will also find information on the Chinese Civil War, Japanese island defences, and other historical subjects. If you are interested in PTO, you will find much in here to your liking. I cannot comment on the scenarios, as I have yet to play any. I just started playing a few PTO scenarios last year, after a 20-year hiatus.


LFT Magazine Issue 11
My favourite issue because it has a rare picture of me playing a game at ASLOK that I actually won! Seriously, this is a polished issue concentrating on France 1940. There is an extremely well done article on Stonne, complete with aerial photograph and hex-grid overlay. All ten of the scenarios  that come with the magazine feature French troops. (The scenarios are printed on A4 cardstock inserts.) Eight take place in France, including a little-known action where Italians attack French positions along the Mediterranean coast. Another takes place in Belgium. The most unique stars French colonial troops in Indochina. Scenario FT98 And Then They Landed uses mapboard LFT1, which comes with the magazine. The Japanese must storm ashore in landing craft and push inland—a nice primer for sea-borne assaults. The magazine’s 80 pages are chock-a-block with articles such as Franco-German infantry tactics, Gun Duel, Platoon Movement, and Group Solitaire ASL.


LFT Magazine Issue 10
One of the most sought after of the LFT magazines, this 80-page issue focuses on the Spanish volunteers who served with the Wehrmacht. If you are a fan of the Ostfront, this issue may be for you. The 10 scenarios in this magazine capture some of the action between the Spanish and Russians, including a final battle in the streets of Berlin. There are superb articles on the history and operational employment of the Division Azul, or 250. Blaue Division, as the Germans referred to this division, which operated under German command. What makes LFT10 especially attractive is the Spanish counter set. The sheet contains enough Spanish infantry to play all of the scenarios in the magazine. As an added bonus the sheet includes counters representing pre-1942 German paratroopers, as well as “opportunity fire” and “SW First Fire” counters, to name a few. I have played more than half of the scenarios in this magazine, several more than once.

Really makes me want this product. Great idea regarding the special offer. I think it would be wise of your buyers to purchase the reduced price copy as going by Op Chariot box it really does not travel well and as such may as well get the $10 discount

hi chris; i want to order KGS:SofC and from the cellar 6, at your discount price, but when i go to kitshop to order them, they are not there, am i doing something wrong?? i would like the 90 dollar one if its still available? John Haas

KGS is REALLY Amazing! What a great looking product. The maps are by far my favorite. The winter and spring variant of the same terrain changed over time is cool. I love the COUNTERS too. I have not spent as much time with it as I would like, busy as I am right now, but so far I have been blown away with the quality of the thing. Can't wait to get playing it. Maybe I'll get cellar 6 from you at CASLO, when Kelly is not looking ;)

"Maybe I'll get cellar 6 from you at CASLO, when Kelly is not looking ;)"

Fat chance of that. If she is anything like Helen, she has eyes in the back of her head. :D