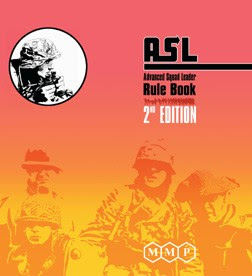 Advanced Squad Leader turned 25 in 2010. But my journey began much earlier, in 1977, with the release of Squad Leader. Being a nostalgic sort of fellow, I wanted to commemorate not only ASL, but the revolutionary tactical game that John Hill designed almost 35 years ago. And I wanted to do it with a unique set of precision dice.

I began with an assumption that a set of four dice would be ideal. I wanted an "opposing" set of dice that could be shared between players, or simply used when playing a particular nationality. Germans and Russians were a natural choice. The Ostfront was where the bulk of the fighting (and dying) occurred during the Second World War. More importantly, Beyond Valor is the core ASL module of the ASL system; players are bound to find use for a set of German and Russian dice. In keeping with how dice are utilized in ASL, I would need a white die and a coloured die for each pair. So off I went looking for inspiration. I didn't have to venture far. My ASL Rule Book got me thinking... 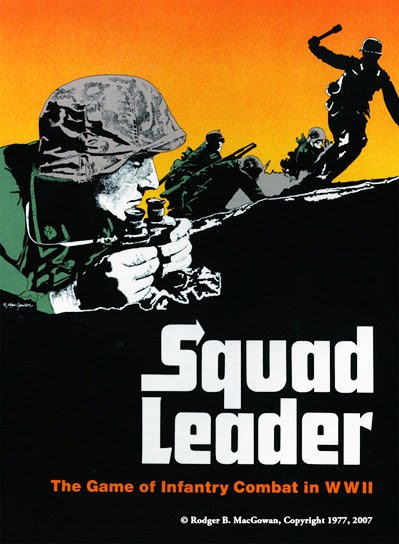 Rodger MacGowan's artwork on the cover of the Squad Leader box included a non-commisioned officer of the Waffen SS. (The NCO apparently belonged to 3. SS Division Totenkopf). The latest artwork on the ASL Rule Book sports a black and white version of this NCO, a reminder perhaps of the game's heritage. I felt that the NCO would be a good starting point for a dice design.

A helpful Canadian on the GameSquad ASL Forums was able to provide me with the black and white photograph upon which the artwork was based. I initially tried to mimic the camouflage pattern on the smock, but the detail was lost at scale. I wanted to add some meaningful text to the design, but even on a 5/8" (~16 mm) die, I was limited to a couple words. Rather than add descriptive text, I opted for "ASL 1985-2010." It was far from perfect, but the contrast of black foil on a white die would prove striking enough. 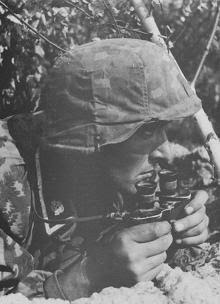 I then turned to work on the Russian die. The first edition of the ASL Rule Book used to have four images: a German NCO, a Russian officer, a British NCO, and an American. As already noted, the German NCO first appeared on the box cover of Squad Leader. The Russian officer debuted on the cover of Cross of Iron, the first Squad Leader "gamette" that expanded the system. I just noticed that the cover also sports a Knights Cross with Oak Leaves.--what a coincidence, as you shall soon see. 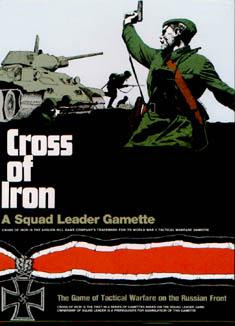 I tracked down the photograph of the Russian officer and went to work. Information on this officer is sketchy. According to one source, Max Alpert, the famed TASS photographer, took the photograph in 1942. He did not record the name of the officer. Some speculate that it is Second Lieutenant Alexey Eremenko; others have identified him as a "political instructor" by the name of Yeremenko. Either way, it is a powerful photograph. I really like the way the officer is calling his troops forward in this propaganda still. There is a sense of urgency and action not seen in the pensive (and posed) picture of the German NCO. 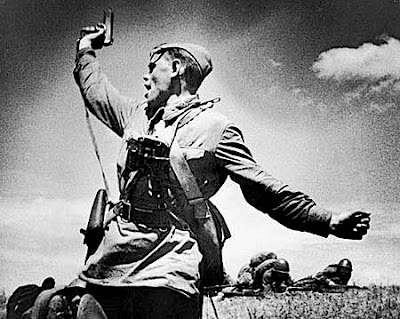 This design required a little more work, first in Photoshop, and then in Illustrator. I'm an amateur where these programs are concerned, but the results were satisfactory given the final size of the artwork on the die.

The next task was to create a matching coloured die for each soldier. Blue was a natural choice for the Germans. In retrospect, I would have gone with a light-blue, and reserved dark-blue for the French. However, the dark-blue does provide a good contrast for a metallic foil. Moreover, these dice would be a special, limited edition set, as I did not intend to make an entire line of 5/8" dice. I chose dark-red for the Russians rather than amber. (I wanted to reserve amber for Commonwealth dice.) I am glad that I did.

The BattleSchool promotional dice used a silver foil, and I was looking for an excuse to use gold foil. I liked the look of the Hero of the Soviet Union medal, and knew almost immediately that it would be ideal for the red die. 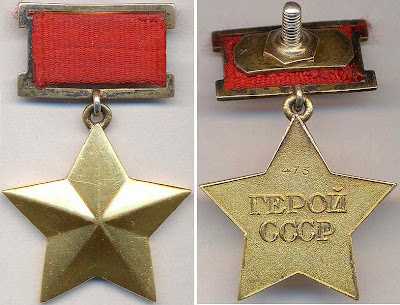 Once I decided to use a medal on the red die, nothing less than an Iron Cross would do for the blue die. An Iron Cross on its own seemed lacking, however. After some fiddling about, I chose a Knight's Cross. But I found the ring and clasp at the top of the cross unsightly, especially at scale. Only the Knight's Cross with Oak Leaves appeared to work against the ribbon. And that is how I came to use the same medal as on the cover of the Cross of Iron box. 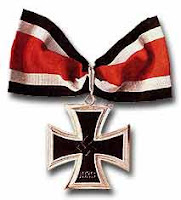 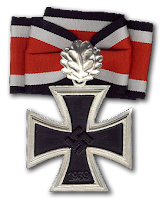 The ribbon of the Knight's Cross, and to a lesser extent the Cross itself, took a lot of work to clean up and look decent at scale. One of the problems with the ribbon was that while it has three colours, I only had two "colours" to work with: the blue of the die, and the colour of the foil, in this case silver. In the end, I had to come up with a stylized version of the ribbon. It is serviceable, but the red die remains my favourite design.

With more real estate to work with than the white dice, I wanted to add some descriptive text to the coloured dice. In order to reinforce the nationality distinctions, I would not use English for the descriptions. In spite of the generous font library that comes with Adobe Create Suite 3, I felt limited. I wanted a Germanic script for the German die, but had to settle for Lucida Blackletter. I had more success with the Russian die. Candara Bold gave me the austere look that I wanted for the Cyrillic text. This was another reason why the red die became my favourite. The result of all this mucking about can be seen below. 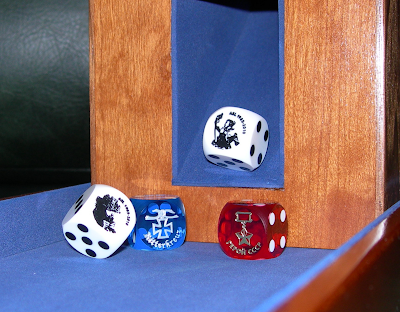 As an incentive to those competing in the World Cup at ASLOK, we gifted two sets of ASL Anniversary BattleDice. This USA versus the rest of the world challenge has been ongoing since 2003. To date Team USA has yet to record a win. Congratulations to David Longworth (Australia) and Jim Burris (USA), MVPs of their respective teams.

Our Limited Edition anniversary set of four dice features a unique image on the “ace” of each die. Each set consists of two “matching” pairs of 5/8” (~16 mm) precision dice. We paired the iconic German squad leader with a Knight’s Cross (Ritterkreuz), and the familiar Soviet officer with a Hero of the Soviet Union medal (ΓΕΡΟŇ CCCP). 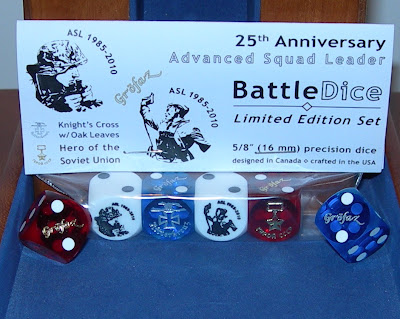 We also produced twenty anniversary sets with Gröfaz on the “deuce.” Gröfaz is the title awarded annually to the best player at ASLOK. Gröfaz is a German acronym used to describe Adolf Hitler: Größter Feldherr aller Zeiten, or Greatest Field Commander of all Time.

The term is attributed to Field Marshall Wilhelm Keitel. Keitel was no fan of Hitler, but had given up trying to argue with the Führer. The term stuck. If I recall correctly, General Heinz Guderian once showed his scorn for Hitler's amateur prosecution of the war by referring to him as the Gröfaz.

We gifted a set of these special dice to the Greatest Field Commander of 2010. Congratulations to second-time champ Bob “Bendizoid” Bendis.
Posted by Chris Doary at 20:14

I confirm ; these dices are fantastic ;-)

when I got my Battle Dice at Beau's I was Very impressed but when you came out with the Anniversary Dice I was just blown away. Very Cool!

Is this pack of dice available to purchase?
Brgs, Serge