Why I play Advanced Squad Leader 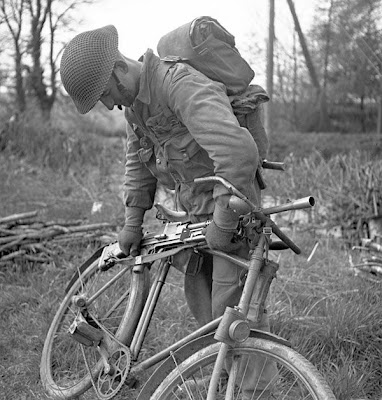 The Danish Nimbus has nothing on this Canuck "truck."

My father joined the Canadian Guards in the late 1950s. Although he was never issued with a "combat" bicycle, he did lug a Bren gun a fair bit in his day. His father had fought in the Battle of the Atlantic, on corvettes and destroyers of the Royal Canadian Navy. My maternal grandfather was an anti-tank gunner during the Battle of France in 1940. He ended his war with a panzer division in the Netherlands, where he was taken prisoner. So I suppose that it is no surprise that I grew up fascinated by the Second World War. 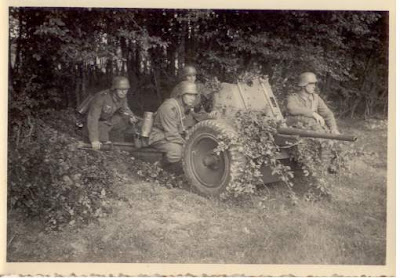 The 3.7 cm Panzerabwehrkanone (Pak) 36 was the standard anti-tank gun in service with the Wehrmacht in 1940. I wish that I had quizzed my grandfather about this infamous "Heeresanklopfgerät," or "army door-knocker." The inability of its rounds to penetrate some French tanks must have been unnerving.

I began playing Squad Leader (SL) in the late 1970s. As a teen, I was smitten with the detail that the game system offered. I had played other Avalon Hill games, but nothing could compete for my attention like this tactical-level game. As I grew up, so did Squad Leader. I remember when I first learned of the release of Advanced Squad Leader. I was in the Golan Heights (Israeli-occupied Syria) at the time.

The fellow who had hooked me on SL was by this time a signaller in the army. He contacted me from Canada via radio to tell me that our mutual friend, and Squad Leader playing pal, had had a terrible accident. Like me, my friend had played SL as a teen, had joined the reserves, and had gone Regular Force. My battalion had relieved his the year before in Cyprus. We had a chance to talk over a beer, but had not played SL in a year or so. The signaller explained that our friend's neck had been broken while playing football during company sports. The prognosis was that he might never walk again. [I learned later that he was quadriplegic.]

I was devastated and dumbfounded. Terrible things always seem to happen to the nicest guys. However, my signaller friend simply couldn't contain himself. As tragic as the accident was, he couldn't wait to tell me of the release of ASL. When I returned from Israel in 1986, I went to see my friend at the rehab centre. I didn't know how to react. I tried to be nonchalant, and downplay his plight. After all, he was an ex-infanteer, a pioneer no less; he would work through this somehow, or so I thought. I said things that I shouldn't have said. Happily, talk turned to ASL. Was he interested in having a look at it? He was. We have been playing on and off ever since. 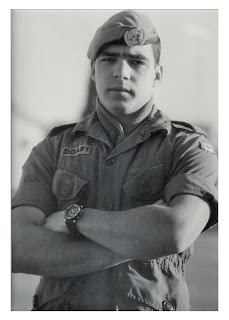 ASL proved not only better than SL, but also much bigger. One didn't have to go beyond the table of contents to realize that ASL was going to provide a life time's worth of enjoyment. The ASL Rule Book was absolutely stunning. Full-colour, wonderfully illustrated, indexed and replete with footnotes. This was no ordinary rule book, no ordinary game. The chapters were colour-coded and organized thematically. The pages were punched. New pages and chapters could be added to the binder as they became available. Old pages could be discarded and replaced. It was revolutionary for a board game. It was also handy for my quadriplegic friend who took to carrying a page with him whenever he travelled to and from home and rehab. By reading one page at a time, he was able to digest the material far better than I. My win-loss record versus him was certainly a testament to his method.

But aside from all the detail, organization and expansiveness of ASL, I think what I like most about the game is the challenge. There is far more to this game than memorizing, or even mastering the rules. To paraphrase a prominent Dutch player, ASL is about solving a tactical problem. In order to do this successfully, one has to exercise plenty of self control, be it endurance, patience, or the ability to absorb the fickleness of fate. Self discipline is key. Solving or "grokking" the puzzle, is a close second. And while having fun is the ultimate objective of any game, there is immense satisfaction to be gained from staying the course, finding a solution and succeeding.

To be fair though, when I first began playing Squad Leader, we derived a lot of pleasure from sampling the different situations offered by the scenarios. We also played a fair bit of Design Your Own (DYO) scenarios that allowed us to game different aspects of the war. These fanciful, often massive, scenarios broadened our gaming experience. ASL took our gaming experience to the next level. 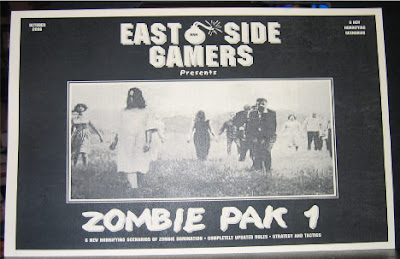 Third-party producer East Side Gamers published this Zombie PaK in 2006. It was a follow up to their humourous  Oktobermessed! Zombie Rules for ASL, released in 2004. The module included a hand-made mapboard, rules and scenarios dedicated to the undead.

There are scenarios for beginners, and scenarios for grognards. We can recreate actions in the dead of winter, amid the dust of the desert, or in the jungle of the tropics. We can play solitaire, or in teams. And we can play campaign games on historical maps, and we can play on deluxe boards with miniatures. 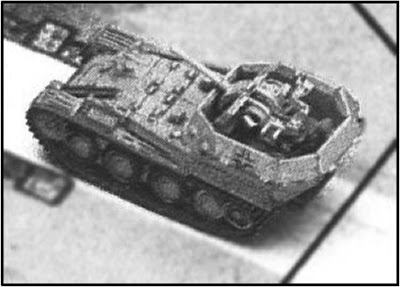 But all of this wonderful detail comes at a price. It takes time to learn the system. It takes even more time to progress to a level where one can truly appreciate the subtleties of Chapters E-G, not to mention Historical ASL (HASL). Although I am well on my way, I am far from where I would like to be. There is so much to savour in the system, it seems a pity to ignore some aspect because the rules appear a bit daunting.

It occurred to me that I cannot be the only one who, despite years of playing, remains uncomfortable with certain portions of the rule book. Moreover, newer players, brighter as they may be, likely hold similar reservations about some portion of the rules. These assumptions led me to conceive the BattleSchool project in 2007. The brief of this project grew to include coaching beginners through the Starter Kit series. It is proving to be as much work as I anticipated, and then some. But I have learned  much along the way. That said, I do not expect to be spelunking with my Japanese just yet. There is still plenty to learn in Chapters A-E.

I profess no special knowledge or expertise of things ASL. However, when I taught courses in the military, I discovered that instructors frequently learn as much as their students. Teaching reinforces and expands one's understanding of the material that is being imparted. I encourage you to try and do the same with ASL. But if you are like many in the hobby, you are struggling to find enough time to play, let alone coach a new, or less experienced player. With BattleSchool I hope to make your ASL journey a little easier. I aim to do this by providing materials that will ease you and your friends along the road to ASL discovery.

Just reading this now in 2018. Great post and great history. May inspire me to make my own history public.

Nice to know that my reflections remain of interest some seven years on. Everyone has a unique ASL story. I encourage others to share their own stories, especially with those who are thinking of dipping their toes in ASL Water Obstacles.

Good gunning until we meet again!