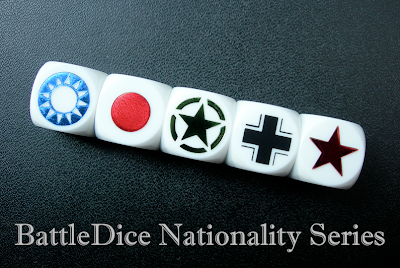 Our newest line of precision BattleDice have arrived. There are five dice in the basic set. The set includes American, Chinese, German, Japanese, and Russian dice. The dice are not much bigger than those that came with ASL Starter Kit 1, or Beyond Valor. However, our BattleDice are prettier. Helen told me so.

We were not sure what to call this first set. It is something of a cross between stars and suns. We finally settled on East meets West.

Quite a few people have asked us why we have not produced a ½” (12.5mm) series of dice. When I designed the first set of BattleSchool dice, my thinking was that a larger die was easier for grey-haired folks like me to eyeball. I also reasoned that a larger die allowed for more elaborate and interesting designs.
Well it turns out that a lot ASL players can see just fine. Moreover, many players prefer smaller dice for some very sensible reasons. If you use a dice cup, or a compact dicetower, smaller dice make sense. Smaller dice provide more “action” in a cup than larger dice do. Smaller dice are also less prone to getting stuck inside a dicetower than larger dice—less prone, because even small dice occasionally become hung up in a tower.
Back to the drawing board
I really want our dice to be attractive, not just functional. The smaller canvas of a ½” die invariably puts limits on what I can do from a design perspective. From the start I decided to keep things as simple as possible. Unfortunately, this can lead to uninspiring designs such as the Japanese “meatball,” or sun disc. But this very simplicity has its own benefit. The red orb looks like an enlarged pip. Doing sums should be a snap with this die. In fact, several of the designs mimic the shape of a pip. So in one respect these simplistic designs improve functionality. Nevertheless, the American and Chinese dice demonstrate that even a simple design can be striking.
I also wanted to design an economical line of BattleDice. In order to keep costs down, I decided to dispense with a matching coloured die. That is not exactly true. You still need a coloured die. But what you do not need is a custom, coloured die designed to match each white die in the series. Because there is a substantial set-up fee associated with each new design, I opted for a generic approach. Let me explain.

The nationality series of dice are all white except for one black die. I will come back to the black die in a moment. The “matching” die for a white die is whatever you want it to be. There are limits. This is not Baskin Robbins. We carry eight colours of transparent precision dice. (Note that amber is no longer available.) You can use the same coloured die for each white die, or use specific colours for specific nationalities.
There are some obvious advantages to this system. If you already own some ½” precision dice, you are set. Just pair them up with our white BattleDice and you are in business. Another advantage is that you can use the same coloured die for any number of different white dice. In a pinch, one coloured die is all you need to make our nationality series work for you.
The choice is yours. Buy one coloured die, or buy a “matching” set of five. We have discounted the price of our coloured dice to make this more attractive. However, there is no requirement for more than one coloured die. In truth, you may decide that a single black die is all that you will ever need.
Black goes with everything
There are more than 35 (white) "nationality" dice in our 12.5mm series. However, there is only one black die.

The black die is essentially a "color" die with rate-of-fire reminders on three faces. Moreover, it retains pips on all faces. Although this die can also be used as a third, rate-of-fire only die—in conjunction with another coloured die, we now have a dedicated white die with colour pips, dubbed The Heretic, for this purpose. (See our 12.5mm page for details.) The biggest advantage of the Mini ROF is that you can own any number of white dice in the nationality series, but need only the Mini ROF (or another coloured die) to make the set work for you. The black die is available with lavender, light-green, teal, or pink foil ROF reminders.

How to order
You may order direct by emailing us at battleschool at rogers dot com.

Currently, some “nationalities” are available for purchase as singles. Just want a British die? Or how about a French one? See KitShop page for details.

Axis Minors are available in our Axes to Grind Pack. Each belligerent in the pack had an axe to grind, and sought to regain lost territories. Most switched sides during the war, and in several cases fought each other.

More “nationalities” are in the works, including dice for the Korean War.

The first die in the Partizan Pack represents Josip Tito's Partizan Army in Yugoslavia. (The Russian-coloured vehicles found in the Yugoslav chapter H notes, for example, are for use with Tito's Partizans.) The second die is a symbol of the Armia Krajowa (AK), the Polish underground army. This set gives players flexibility to represent communist, and non-communist partisans during play. The Free French (Cross of Lorraine) die can also serve as a generic “Western” partisan die, in addition to the French Forces of the Interieur (FFI), a.k.a. the French Resistance.

Collect them all, or only what you need. Just be sure to find time to use them. Except for our forthcoming Dust Devils, BattleDice are not meant to collect dust. Roll more, and play more! Roll 'em often.

Thanks Stephen. They are quite colourful. Just added the code to the KitShop page. The PayPal buttons worked when I tested them. But they can be fickle. Time to get some sleep.

When are the next nationalities coming out, Chris?

Thanks for the question.

We planned to release more dice in this series in October. Not sure if that will happen given the delays we are experiencing at the manufacturing end of things.

We also planned to release the Mini ROF at the same time. It is designed to work as the default "coloured die." Players may use it as a third, ROF-only die too. But the rationale behind this black die was to reduce the overall cost of the series by removing the requirement for a matching coloured die for each white nationality die. The foil on the Mini ROF is there to remind players when they maintain "rate." Hence the bright coloured foil.

I have added the designs for the Mini ROF to this post. I also added images of the proposed Mini Sniper! die.

Where do you guys get your dice made?

All of our dice are designed in Canada and crafted in the USA.

The manufacturer confirmed last week that all of the designs are a go. We will roll out the Axis and Allies Pack, the Commonwealth Pack, and the new Sniper! and ROF dice at the ASL Oktoberfest tourney in Cleveland, Ohio a month from now.

these dice look great... I just wonder why you included a Chinese symbol in the first pack - I am sure that there are much more scenarios around (and being played) with British or French troops!

An excellent question, thank you for asking it. There were two main reasons for including the Chinese die in the first set.

1. The two nationalities that people have asked about the most in the past year have been the Japanese and the French. We released a pair of "British" dice in 5/8" [16mm] last October. So we reasoned that it was probably a good time to get something to market for PTO fans. We included the Chinese because they have been featured a lot in scenarios in the past few years [EX: Blood and Jungle]. We also wanted these dice to be available for when Rising Sun was released.

2. The reason that we omitted the French and British from our first pack was ultimately because of the technical difficulties involved, however. Because their symbols are in two colours, these dice require stamping twice. They also require two different stamps, one for the spot, and one for the ring. But the trickest part of the process is trying to align the dot in the centre of the ring.

All of our dice are partially made my hand. The paint in the pips is applied by hand, and the designs are stamped by hand. This means that the French and British dice are more labour intensive and costly to manufacture. Because of the difficulty in aligning the symbols, there is also more wastage. This means that the packs containing French and British dice will cost a bit more than the other packs.

Of all the dice we make, the 12.5mm ones are the most difficult to work with because of their small size. Given that the British and French dice would add another level of complexity to the manufacturing process, we decided to wait until the manufacturer was confident enough to proceed with the work.

The manufacturer was surprised to see how well the East meets West Pack turned out. And although hesitant, agreed to give the French and British a go now. This is good news, because we were prepared to release Axis and Allied Minors first if the manufacturer was not ready to take the next step. Thankfully they are.

The British (and French) are coming! :]