Canada Day—Dominion Day, for those old enough to remember—marked the first anniversary of Sitrep. We decided to celebrate the occasion with an extra special “Budafest” contest.
First, let me thank everyone for taking the time to read and comment on my posts. I know Helen is thrilled to read your comments. She also gets a kick out of seeing people from across the planet drop in for a visit. We have received a great deal of positive feedback in the past twelve months. Thank you for your support and encouragement. I especially want to thank our Squad Leaders for following Sitrep, which brings me to our best contest yet.
Almost 200 Squad Leaders were entered in our June raffle. Many participants received 10 or more rolls! That is a lot of rolling. Helen took it in stride, and in intervals. By noon on 1 July we had determined the winners.
Helen used five dice in the raffle. We did not expect to see a tie for first place, especially if someone drew five aces. In the end there was no tie for the secondary prize either. And what a secondary prize it is!

Tennis anyone?
Eric Garrard is a big tennis fan. He enjoys playing and watching the sport. I can see the attraction. Lest you think I jest, allow me to quote him verbatim: “make sure the entire world knows that I am fanatic about tennis!” Eric is also fanatic about ASL. When I asked him what attracted him to the game, his response was unequivocal. “Everything!” he exclaimed. “It is the best game system on the planet.” “No question,” he concluded.
Eric became a battlefield commander at the tender age of nine. He was fortunate to be part of a game group in “junior high,” and later, in high school. His group played regularly on Thursday evenings. It was the 1970s. Strategic-level wargames abounded. But Eric never took to them, preferring tactical simulations instead. Laurence A. Groves’ La Bataille de la Moscowa, published in 1975, is a prime example. In addition to tactical-level Napoleonics, Eric developed an interest in operational-level games such as Kevin Zucker’s “Campaigns of Napoleon” series. Today, he continues to enjoy Napoleonics and gaming the American Civil War. However, Dean Essig’s “Civil War Brigade Series” has largely replaced Richard Berg’s regimental-level “Great Battles of the American Civil War” series in Eric’s day-to-day play. But as much as he enjoys these other game systems, Eric insists that ASL will always be his “preferred game.”
Eric was 14 when Squad Leader debuted. A member of Eric’s Thursday group had purchased the game and lent him the rule booklet. In 1978, Eric’s best friend found Squad Leader and Cross of Iron under the Christmas Tree. His friend lived only three blocks away. Over the holidays the pair immersed themselves in the game. They played every scenario in the base game, and most of the scenarios in the expansion. Eric knew at once that the game was for him—“oh, to be young and be a sponge again.”1
Eric dutifully purchased all of the original ASL merchandise as it was released. Nevertheless, it took him until about 1994, or roughly eight years, to complete the transition to ASL. He attributes this to the fact that he cherry-picked and arbitrarily combined elements of both systems together. In contrast, my long-time ASL buddy and I agreed to drop Squad Leader entirely when ASL appeared on the scene. But even so, old rules and bad habits tended to creep back into our game. But like Eric, we eventually got ourselves sorted.
Lately, Eric has been coaching an old high-school buddy in the finer points of ASL. That said, he estimates that about 80 percent of his play is solo—not to be confused with Solitaire ASL (SASL). Virtual ASL (VASL) accounts for most of his play. He has logged more than 50 scenarios online in the past 18 months alone. Eric also benefits from a very active gaming community in Indianapolis, where he lives.2 But apart from local game days, Eric has not attended any ASL events or tournaments. A few players from Indiana routinely show up during the latter half of the annual ASL Oktoberfest (ASLOK) tournament in Cleveland. Eric has not ruled out attending “Oktumourfest,” as he referred to ASLOK. However, it could be a couple years before he crosses the state line into Ohio for his ultimate ASL fix. 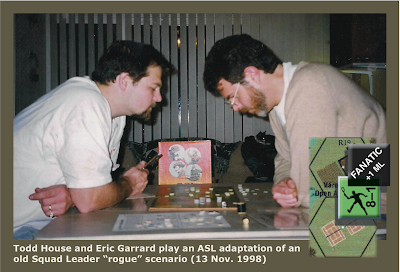 In the meantime, Eric has plenty to keep him occupied. He enjoys gaming all theatres, although he has not delved much into North Africa. He only really took to the Pacific Theatre about five years ago, and has been having fun with it. Frankly, Eric is content to play a no-frills scenario featuring Americans and Germans, as long as it is ASL.
I asked Eric if he had any tips for newcomers. He recommended a thorough reading of chapter A, which deals with the basic mechanics of the game, and Infantry combat. He advised skipping sections that deal with more specialized subjects such as Demo Charges and Flamethrowers, until there is a need for this information.3 “Get the meat and potatoes of the infantry mechanics” down first, he emphasized. Chapter B can be consulted as required. “Just focus on the terrain types you are encountering,” he continued. Later, one can add Guns and vehicles. Take it in steps. A good teacher will speed up the process, but learning in stages is usually best.
Eric commented that “it would be a different world without John Hill.” John Hill gave us Squad Leader in 1977. Since then, legions of devotees have built upon Hill’s game in ways that few could have imagined 35 years ago. Moreover, as Eric underlined, we would not be where we are today without the dedication and hard work of those who have endeavoured to not only keep the hobby alive, but also to expand it in so many wonderful and interesting ways. “We all owe them a debt,” Eric reflected. And we owe Eric a prize.
Eric was the eleventh person to join Sitrep as a Squad Leader. He was also the only person to score “six” in our raffle on 1 July. Almost a year to the day after joining Sitrep, Eric has won a set of our newest BattleDice. The BudaPack contains eight, custom dice. The pack is the first in our historical (HASL) series of precision dice designed to complement a historical ASL module (HASL). The BudaPack adds a little colour to the eighth HASL Festung Budapest, but is not wedded to the module. Feel free to use the Soviet pair against Italians, the Hungarian pair versus Romanians, the SS pair to combat partisans, and a German pair against the Americans. Perhaps the dice will encourage Eric to increase his face-to-face play. Congratulations Eric! 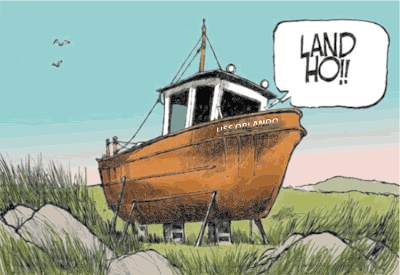 Landlocked
Those of you unfamiliar with European history may be surprised to learn that the de facto Hungarian head of state during most of World War II was a retired admiral. Surprised because Hungary is landlocked. Admiral Miklós Horthy was commander-in-chief of the Austro-Hungarian Navy during the final year of the Great War. In 1914, Austria and Hungary enjoyed access to the Adriatic Sea. The Austro-Hungarian Empire also boasted an impressive fleet, including some of the more modern dreadnoughts of the day. Following the war, the Empire was dismantled, its fleet surrendered to what would become Yugoslavia. New nation states emerged at the expense of Austrian and Hungarian territory and access to the sea. A German-led coup in October 1944 ousted Horthy from power as Soviet and Romanian forces closed on the Hungarian capital. Horthy would spend the remainder of the war in Germany as a “guest.” He died in 1957, aged 88.

Congrats to both the winners and of course to you for hitting the year mark and in such style!

Great articles. You should get a Pulitzer for the way you edited the info I provided! Eric Garrard

Better luck in the next contest. Keep up the great work on Wall Advantage. Good to see you posting regularly again. Get well, and the rest will fall into place.

I had good material to work with, thank you. Roll in style!

Thanks for following. Good to see our first raffle winner still in the game. Hope your newbie is progressing well.

Ohhh, I have got to have an 8-1 tennis leader counter, now.

I can't believe the dice rolled in my favor. I agree with Eric, you did a great job with the info I gave you.

Harold,
I thought that you might appreciate having your own ship, the USS Orlando. :)

Eric had to settle for a SMC.

Harold,... I can not lie. I am extremely jealous. In fact have been debating with fellow ASLers whether or not I should have, in fact, won the contest. The Fanatic 8-1 tennis leader would give me a -1 DRM. Therefore.... there was a tie! Congatulations, and enjoy the module!

Who would have thought I could beat a fanatic 8-1 tennis leader like that? You did pretty well with your prize also.

I did get a nice chuckle out of the USS ORLANDO. No naval gun though? Should have at least a .50 cal up forward to deal with pirates & other unsavory characters. ;-)

Harold,
While a Pompom on the foredeck would have been pretty swell, the only pirates you will likely face are the ones in Disneyland! :)

So, I've got a picture of myself instead of my online avatar; my link leads to a profile page which shows my real name; and here is my comment. So: I'm entered for the draw which'll be taking place on August 1st, and I get multiple votes, yes (how many exactly?)? I just want to make sure I've got all this clear in my mind. :)

While visiting Orlando about 15 years ago, I met up with Dirk Heinz for a game. I haven't heard anything about him for awhile, however.