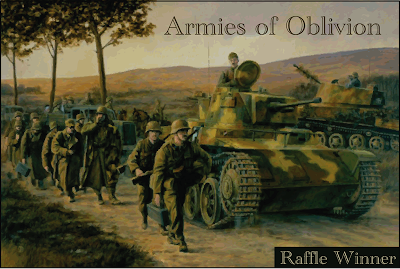 Happy Canada Day! It is the 146th anniversary of Canadian Confederation. Today also marks the second anniversary of Sitrep. Helen celebrated Canada Day by setting off fireworks last night. BattleSchool celebrated another year of Sitrep by holding a raffle this morning for a copy of Armies of Oblivion. The results are in. We have several winners to announce. But before we get ahead of ourselves, we have some catching up to do.
I would like to begin with our 1 March raffle. With one exception, I will announce only the names of the winners at this time. Once I receive photographs and ASL biographies from each of our winners, I will begin posting them under the appropriate headings below. Once this process is complete, a winner may claim a prize by leaving a comment at the end of this thread.
March Madness

On the first of March we had a tie. The tiebreaker results were so close that we decided to award two prizes. I have already posted an ASL biography of our runner up, Davide Bendazzi. Davide lives in Lodi, Italy.

The winner of 1 March raffle is Fernando Javier Garcia Maniega, of Villalobon, Spain. I have been working on his ASL biography for some time. Once complete, I will add it to this post.

Martin Hubley is no fool. He joined Sitrep in May 2012. You should too. Martin currently resides in Halifax, Nova Scotia. He bested everyone in our April Fools' Day draw. Martin has been in touch with us already. A full report on this Hotspur F.C. fan is forthcoming.
May Day

It is never too late to join Sitrep. Mark Watson became a Squad Leader in December 2012. Five months later, he won a Sitrep raffle. In late May, Mark travelled from Toronto to Montreal in order to attend the Canadian ASL Open. It was his first ASL tournament.
June Bug

We had another tie on the first of June. Reg Plummer, an Ottawa, Ontario native, lost out to Timothy Burke of Oakland, California by a wide margin. Tim has been following Sitrep since November 2012. We are looking forward to posting a photograph (and biography) of Tim for our readers.
Canada Day Contest
I would like to thank those who took the time to participate in our latest raffle. About 50 people entered the draw. One fellow won the contest outright with a roll of seven with five dice. The runner up rolled ten. But I will start with a consolation prize that we added in honour of Canada Day.

Roman Reznichenko lives in St. Petersburg, Russia. He is still learning ASL. However, that has not prevented him from playing international opponents online. He also publishes a gaming blog with ASL content called Line of Sight.

Roman will receive a copy of Elite Canadians. This scenario pack includes nine scenarios designed by the late Jim McLeod. Jim founded the Canadian ASL Association in Winnipeg, Winterpeg, or simply The Peg. I think that the friendly Manitoban would get a kick out of someone in Russia playing his scenarios.

The runner-up of our Canada Day contest is Brian Sullivan. Brian lives in Beverly, Massachusetts, a short drive from Boston. I hope to see Brian at the Tussle in the Tundra tourney later this month. It will save me shipping his prize to him.

Drum roll please. The winner hails from Marietta, Georgia, the largest of Atlanta's suburbs. Richard Kindel is no stranger to ASL. We hope to publish a full feature detailing his involvement with the hobby. Richard has won a ziploc copy of Armies of Oblivion, and a set of our Axes to Grind BattleDice.
Congratulations to all of our winners!
I will provide additional details about specific prizes when I post biographies and photographs of the winners. We encourage winners to contact us by email at: battleschool at rogers dot com. We will provide instructions on how to claim your prize.
Thank you for reading and following Sitrep.
Posted by Chris Doary at 19:48

Grats to the winners!

Thank you very much!

Well I'll be- Just what I needed as a consolation for not being able to attend the recent Tussle Tourney! Thanks Helen and Chris