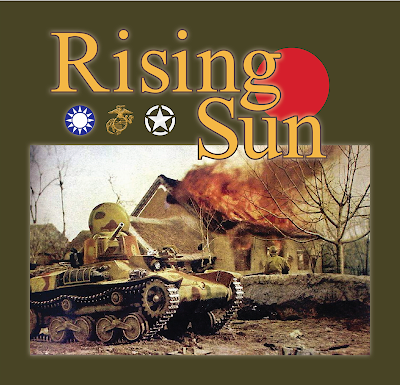 More than four months have passed since Multi-Man Publishing (MMP) resurrected the Pacific Theatre of Operations (PTO). The Japanese generated a great deal of excitement with their 1990 debut in Code of Bushido. A year later, the United States Marine Corps (USMC) received top billing in Gung Ho! More important, the ninth module in the ASL franchise added the Chinese, and the Second Sino-Japanese War (1937-1945) to the system. Gung Ho! also added the counterpart to the Nationalist Chinese Army (Kuomintang),1 the Chinese Workers and Peasants Red Army, the predecessor of the Chinese People’s Liberation Army. The ASL Rule Book refers to these insurgents as Communist, or simply “Red” (G18.3), Chinese. The addition of the Nationalist and Communist Chinese forces to ASL provides players with an opportunity to game countless battles of the Chinese Civil War (1927-1950). And I would be remiss if I did not mention the inclusion of infantry units representing the Philippine Army (PA)—more on these later.
The PTO offers players a unique environment in which to test their squad-leading abilities. The tropical climate, exotic terrain, and stone-age fortifications add new challenges, as well as new opportunities. Jungle (light and dense), bamboo, palm trees, huts, kunai—a type of tall grass, swamp, and rice paddies hamper and/or channel movement, restrict Lines of Sight (LOS), and generally make the Detection (A12.15; G.2; and G.4) of enemy troops and fortifications more difficult. More often than not you will discover a panji2 hexside the hard way, when one of your men impales himself on a two-foot long bamboo stake of this primitive, yet effective fortification. Bamboo deserves respect for similar reasons. This dense terrain not only has a special -1 Terrain Effects Modifier (TEM) under certain conditions (G3.3), but also places a moving or advancing unit at a marked disadvantage. When combined with panjis, bamboo can be a deadly force multiplier. You will not soon forget the first time a Japanese half-squad hidden in bamboo ambushes your USMC 7-6-8, and dispatches your hapless “gyrenes” to a man in hand-to-hand combat.
The threat of Dare-Death squads and Tank-Hunter Heroes (T-H Heroes) also keep you on your toes. At the same time, Banzai Charges and Gurkhas are a recipe for mutual destruction. In fact, high rates of attrition are the norm in this theatre, even when PTO terrain is not in effect.


Endnotes
1. Guomindang (GMD)
2. This type of fortification is also known as “punji” [1870-75, earlier punjee, panja] stakes, or sticks. Sharpened bamboo stakes were often concealed in tall grass, or placed at the bottom of camouflaged holes or pits. Belts of these stakes, driven into the ground and angled toward the enemy, were also a common field expedient where wire was unavailable. Although visible, the line of stakes tended to channel enemy movement. The tips of the stakes were often covered in excrement, which made even a minor wound cause for concern. The term is attributed to the Tibeto-Burman language of the Kachins of northeast Burma.
3. Interestingly, the Ocean 3 overlay is required for scenario HS17 Water Foul, from the Operation Veritable Historical Study. The overlay is used to depict land flooded by the Rhine River. Other overlays are then placed on top of “ocean,” to represent “islands” above the floodwaters.
4. Although not gospel, Chas Argent (responsible for MMP’s ASL line) has stated publicly that the desert-related counters, overlays, and the Chapter F rules from West of Alamein, along with desert boards 25-31 will appear in the third edition of the Italian module.
5. Scenario 63 has been updated. ASL Journal 10 (page 39) lists the amendments, but I will summarize them here. Scenario Special Rule (SSR) 2, which explained the placement of overlays, has been incorporated into SSR 1. The last SSR dealing with Battlefield Integrity (A16.) has been deleted. Instead of six SSR, we now have four. The third SSR (now SSR 2) had the following inserted before the last sentence: “Both the onboard Column and the Turn 2 Column have already expended 2 MF.” The fifth SSR (now SSR 4) has been simplified by deleting the last two sentences and adding “(A25.43)” to the end of the first sentence.
Unlike the Reverse Motion counters provided in West of Alamein, those for Animal-Pack were not reissued in later editions of Beyond Valor. The rules for Reverse Motion (F.11), and Vehicular Smoke Grenades (F.10), debuted in Chapter F, but were incorporated subsequently into Chapter D (D 2.24, and D13.35, respectively). I suspect that the rules for Animal-Pack were intended originally for Chapter F. Instead, they were tacked onto the “end” of the Chapter G rules released in Code of Bushido. The good news, for aspiring mule drivers and counter organizers, is that Rising Sun has you covered with three Animal-Pack counters (En Portee au verso).
6. In September 1993, Issue 6 of the ASL Union of Gamers (ASLUG) newsletter contained a scenario by Dan Dolan entitled “Raiders on Butaritari.” ASLUG11 pits Marine raiders (landed by submarine) against Japanese garrison troops. An abandoned dozer is up for grabs because, historically, the Marines used it in the course of carrying out their mission. Another dozer fan named Dan (Owsen) gave us Z28 “Soldiers of Construction” in 1995. Published in the last issue of Rout Report, the scenario is a Seabee’s dream. Two dozers and an M4 Tankdozer (American Vehicle Note 18) headline in this unusual battle between low-morale troops. Seabee is derived from the first two letters of (United States Navy) Construction Battalion.
The Blood Reef Tarawa CG includes three Seabee platoons in the American RG, each with the potential for three armored bulldozers to be lead ashore by Pathfinders (T1.).
7. Japanese Mortar Caves (KR5.) are an exception to the rule, and use a red arrow. Spigot Mortar Caves are found in the Kakazu Ridge HASL. These special caves housed a 320mm mortar. Consequently, the normal stacking limit is a HS.
8. Non-hidden, non-prisoner Infantry in caves are eligible sniper targets (G11.8).
9. I have JR VanMechelen to thank for bringing this subtle advantage to my attention. See also Dade Cariaga’s “Spelunking 101: Tips on Cave and Cave Complex Setups” in ASL Annual 96: 42-44; and, if you can find it, Brian Youse’s “Cave Busting 101: A Look at the ‘Invincible’ Jungle Fortress,” and the accompanying training scenario “Taming Tulagi,” in Backblast 1.
10. Japanese pillboxes are a different beast too. Due to excellent camouflage, a Japanese pillbox set up in Concealment Terrain always sets up hidden, and is revealed as if in jungle (G.2). The use of HIP includes the occupant(s) of the fortification, and does not count against the percentage of Japanese units otherwise allowed to set up hidden. Were this not enough, each Japanese pillbox comes with its own tunnel, provided that one of the tunnel entrances is in the pillbox (G1.632).
11. This also includes their SW, Manhandled-Guns, Guarded-prisoner(s), and as clarified in ASL Journal 10, Japanese Dummy units.
12. It is possible for the level of the cave to differ from that of the hex. Caves situated in the side of a cliff, and/or in a Depression, may exist at more than one level. See, for example, an Upper-Cliff cave (G11.113).
13. For example, no LOS exists between caves in the same hex. Moreover, LOS is exclusive of a cave’s CA Hexside vertices, if the cave is IN a Depression (see also B19.51).
14. MMP noted in Journal 2 that “several more ‘Dolan gems’ on Kakazu Ridge” were still in the play-test phase, including one with a working title of “Hara’s Horror.” It remains unclear whether or not these unfinished designs will eventually see print.

Great post, and happy new year. Looking forward to playing with the bulldozers in SC.

Thanks K and Mark,

@ Mark, I have added your blog to my blog list. Keep posting!