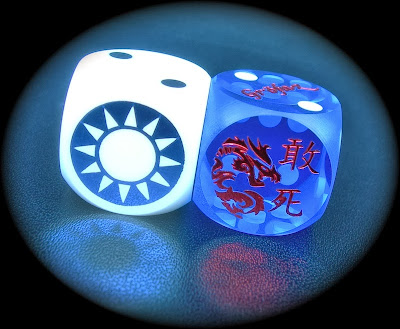 He swears by it. Before each roll of the dice, he blows on them.1 Perhaps his ritual dispels any accumulated bad mojo. Or maybe he picked up the habit in Vegas. But I am beginning to wonder if there is something to the superstition. I have yet to best this ASL magician in a game. Lady luck must be at his side. For as Ol’ Blue Eyes cautioned:
A lady doesn't leave her escort
It isn’t fair, and it's not nice
A lady doesn’t wander all over the room
And then blow on another guy's dice


So it must have been for the winner of our latest contest. Although in his case, it may have been dragon’s breath that brought him good fortune.
Santa’s workshop 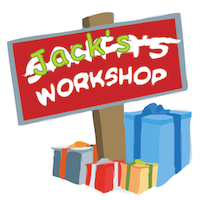 In a novel departure from earlier contests, we asked participants to enter on behalf of someone else. The idea was to encourage ASL players to nominate fellow players for a prize. Call it a twist on the Secret Santa concept. Only is this case, the gift would come from Santa’s workshop. One elf, let’s call him Jack, has been busy crafting attractive dice towers from an array of fine hardwood timber. Provided a player had not been too naughty, we would go with the recommendations of his or her backers. A chic dice tower, and a pair of precision dice, will arguably do more to change a person’s luck than blowing on a battle-worn pair of cubes from Beyond Valor.
The towers-that-Jack-built have proven quite popular. At present, they can be found gracing gaming tables in Canada, the Czech Republic, Germany, the Netherlands, Spain, Sweden, the United Kingdom, and the United States. Rumour has it that some may yet find their way to Ireland and as far away as the Philippines. It helps that the towers will handle our 16mm BattleDice with room to spare. But the fact remains that the beautiful hardwoods used in their construction make them hard to resist.
Helen was saddened to see her favourite—a tower built of marbled black walnut—head to Germany, never to be seen again. I am more optimistic about seeing this particular tower again. Helen and I agree that a trip to Europe is long overdue. Meeting new (and old) friends at a European ASL tournament could well prove to be a good introduction to the continent, before heading off to explore the history and culture of the Old World.

No way to treat a lady
Ominously, and to our surprise, only 13 people entered our contest. In spite of the small number of entries, Helen and I were touched by many of the stories behind them. To tell the truth, Helen was  also relieved to learn that she would not have to spend an hour or more rolling dice. Her first roll was nevertheless a disappointment, of sorts. Martin Hicks, an Ottawa resident, opened the contest with a pair of sixes. No matter, we will ensure that his rotten roll has a happy ending for his nominee Timothy Snider of Kanata, Ontarios.
Tim lives about 25 minutes drive from me. Until a couple of weeks ago, I did not know his name, and I certainly had no idea that there was yet another player lurking in the “ASL wilderness” north of Kanata.2 It turns out that Martin has been schooling Tim in the finer points of ASL Starter Kit for a year or so. Tim has two young daughters who keep daddy busy most of the time. About once a month, however, Tim sneaks away for some cardboard combat. Tim will receive a Big Baby Sniper! die. It may tempt him to venture further into the world of Advanced Squad Leader.
Welcome to ASL Tim!

East meets West Sussex
A parcel left Ottawa on 2 December. It was headed overseas to a nondescript house in a town of modest size. The recipient is a regular ASL player. One might be tempted to call him an average ASL player. But unlike the majority of ASL players worldwide, he does attend ASL tournaments on a fairly regular basis. In fact, I have it on good authority that he has attended Britain’s longest-running ASL tournament no less than five times.3 I will not reveal his name just yet. I would prefer that he receives his prize first. However, for the sleuths among you, there are plenty of clues in this post to point the would-be Sherlocks in the right direction. Suffice it to say that Lee Hyde, a relatively new convert to ASL, brought this gentleman to our attention.
In my previous  post, I proposed that players share their good luck with those who were down on theirs. Lee did this with style. With only 13 contestants, we did not expect many ties, and Helen therefore used only two dice for the raffle. There were no double ones. However, two participants tied with low rolls of three. In the tiebreaker, Lee managed a second red dragon, finishing with a dice roll of three. Not bad for a new guy.

Lee lives in Sompting, West Sussex, almost due south of London and close to Brighton on the south coast of England. His nominee lives roughly 40 kilometres away in East Sussex. I gather that Lee’s mentor has been passing on pearls of ASL wisdom gleaned in Bournemouth, at the annual Intensive Fire tournament. I also suspect that he is directly responsible for maintaining Lee’s interest in the hobby. Moreover, I am absolutely certain that our mystery man had a hand in convincing Lee to attend his first ASL tourney this past October. A certain amount of self interest is tied to any effort to teach ASL to another gamer. But for the most part teaching ASL is akin to a calling. It takes a great deal of time and patience to not only coach an ASL neophyte, but also to encourage and motivate. As they say, one good turn deserves another.
Our international man of mystery has won an attractive black walnut dice tower and a pair of our Kuomintang (Nationalist) Chinese dice. Congratulations!

UPDATE: New Years Day - I got word from our winner today. He has been out of town. Nick Carter lives in Uckfield. He told me that he has not had a chance to use his new dice tower yet, but plans to do so soon. Nick did take time to Christen the tower with his new Chinese dice. The sun and dragon were kind to him. His first roll was double ones! Damn! I may have sent him my set in error. ;) What an awesome start to his ASL year. He promised to send a photo of the tower in action later this month.
The next free lunch
We cannot say when we will hold another contest. I guess it pays to be patient, and most of all observant, not unlike a hawk poised for its next meal. Seriously, thanks for reading and following Sitrep in 2013. We would like to wish everyone a Merry and safe Christmas. Fingers crossed, we will have at least one toasty post to usher in a chilly New Year.4
Notes
1. One plausible explanation for this ritual is that, in the past, some unscrupulous gamblers coated one side of a die with a transparent, sticky substance. The moisture in their breaths activated the coating just before they threw the dice. Another, more prosaic, explanation is that players blew on the cubes in order to remove dust that accumulated while playing dice in back alleys.
2. Kanata is a Huron-Iroquois word for settlement, or village. As the story goes, explorer Jacques Cartier thought that the natives who used it in his presence were referring to their homeland in general. The Frenchman thereafter began calling the area around the St. Lawrence River “Canada.” During the deliberations that led to Confederation in 1867, delegates heard arguments for a bewildering number of names for the young dominion. The list is said to have included: Acadia, Albertland or Albertoria (after Queen Victoria’s German first cousin and husband Prince Albert of Saxe-Coburg and Gotha), Albionora (Albion is an archaic name for Great Britain), Borealia (Latin for northern, or of the north), Britannia, British North America, Cabotia (after the English explorer John Cabot), Canadensia, Colonia, Efisga (a clumsy acronym supposedly based on the major founding peoples: English, French, Irish, Scottish, German and Aboriginal), Hochelaga (from the Iroquois village where present-day Montreal was founded), Laurentia (after the St. Lawrence River, so named by Jacques Cartier in 1535, when he arrived in the estuary on St. Lawrence’s feast day), Mesopelagia (Greek for land between the seas), New Albion, Niagarentia, Norland, Superior, Transatlantica, Transylvania, Tuponia or Tupona (another nauseating acronym, this one for The United Provinces of North America), Ursulia (Latin for place of bears, after the constellations Ursa Major and Minor, better known as the Big and Little Dippers), Vesperia (Latin for land of the evening star), Victorialand, or Victorialia (after the half-German monarch of England).
I am a skeptical of some of these purported names. Conspicuous by its absence is The Great White North. To everyone’s immense relief, the Dominion of Canada received unanimous support, sparing future generations from endless spelling fits.
The former city of Kanata, especially its high-tech business park, was dubbed Silicon Valley North during the late 90s. It is now part of Ottawa, the nation’s capital.
3. My source tells me that our mystery man attended Intensive Fire in 2002, 2003, 2007, 2012, and as recently as this past October.
Posted by Chris Doary at 21:57