From Start to Finnish: Part 4 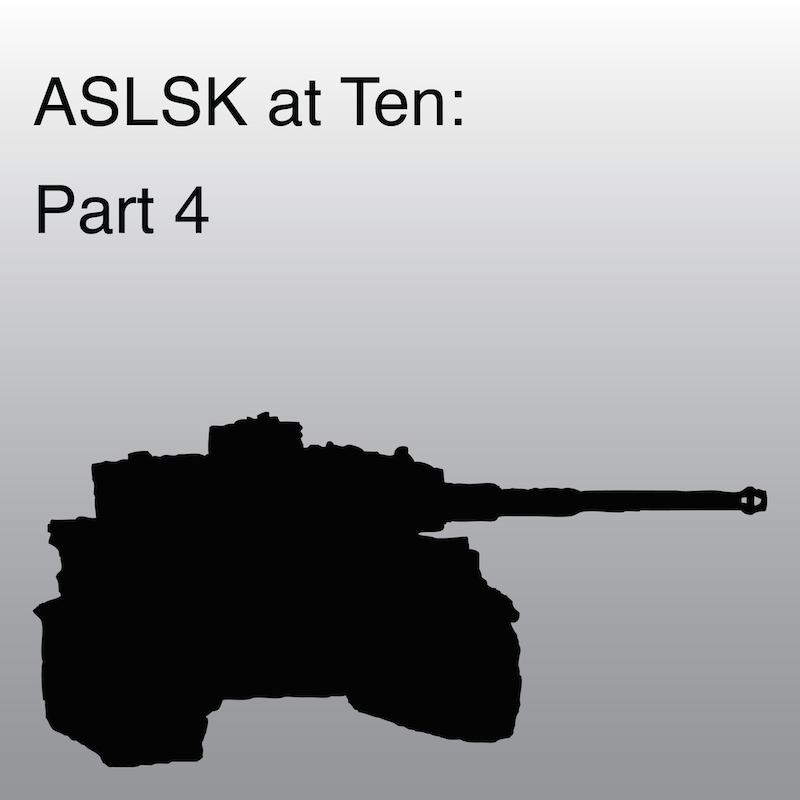 ASLSK3 (2007)
The third offering in the Starter Kit line brings more real estate to your table top than either of its predecessors did. There is some new terrain to contend with, along with a new class of Gun. In keeping with the all-in-one experience, the third Kit also includes a pair of “official” ASLSK dice, two and a half sheets worth of playing pieces, more charts than ever before, eight scenarios, and 40 pages of reading material. But who am I kidding? The real hook is the cats. ASLSK finally gives players something to whiz and clank around the windy network of roads. I mean, what newbie can resist the opportunity to drive a Puma, or a Panther? Starter Kit 3 has both. As the cover art hints, it also has Tigers, and really big Tigers too. But first, the mundane mapboards.
New growth
There is only so much that one can accomplish with less than a dozen flavours of terrain. The garden gnomes have not been completely idle. Shrubbery has sprouted on all of the new boards in ASLSK3. The fresh growth with the marsh-like map symbols is not marsh. Nor is it tropical grass, which incidentally is what ASL transforms grain into for scenarios set in a tropical environment. Brush, as the new green stuff is officially known, is similar to grain. These sparsely treed areas are characterized by juvenile trees and dense ground cover. The latter makes brush more time consuming to traverse. Like grain, Brush is a hindrance to same-level fire, and provides no Terrain Effects Modifier (TEM). Unlike grain it is always “in season.” In other words, Brush remains a hindrance regardless of the time of year, and therefore, entry costs remain unchanged.1 Brush might strike some as a poor cousin of woods. However, when it is raining mortar bombs, brush is a darn sight safer than woods, because Air Burst does not apply. Now let’s consider the overall nature of the mapboards; there are three of them.
Home on the range
The small hill excepted, board t is a more “open” version of board x (from ASLSK2). Board t is what some would call “tank country,” because it allows Armored Fighting Vehicles (AFV) room to manoeuvre. Crossing a grain field requires no more effort of a tank than crossing Open Ground does. Good tank country tends to allow for long lines of sight. Huge swaths of grain defeats this purpose, although it does provides cover. But cover for who? There are heaps of places for anti-tank weapons to hide. In fact, when the grain is out of season, board t might be described better as “anti-tank country.” Furthermore, a well-sited Gun emplaced on the heights can dominate a third of the board—so much for “tank country.” Board t is not necessarily infantry-friendly either, especially if enemy armor is on the prowl. What “rally terrain” exists is confined mainly to the periphery.2 Also, the vast grainfields can become killing fields fast when Infantry is fired upon from higher ground.

Another great post that continues to set the standard for what blog posts should be.

Thanks for the generous praise Scott. I hope that my lengthy explanation of ASLSK3 entices more people to break out the cardboard and play more ASL.

Hey Chris - I LOVE your graphics, especially the "profile" type graphics with a counter and a real photo. Do you do these yourself?? Photoshop? This was an awesome post.

I use InDesign, Adobe Illustrator, and Photoshop to manipulate images, and/or create new artwork from scratch. But I'm no artist.

I try to provide a historical counterpoint to the ASL subject at hand. My hope is that prospective and newer players will be drawn to ASL more when they see how closely the game mirrors real events, people, and historical artifacts. I also try to inform and entertain readers. Happy to see that I have entertained someone this week. :)

Nice work, though, Chris. You've not only entertained me but impressed the heck out of me with the graphics work. I want to be able to create the same quality of graphics in our upcoming St. Louis Historical ASL magazine that you do here on Sitrep. Keep up the good work!

Thanks Brett. I am sure that people would love to see graphics that surpass the amateur work on Sitrep. But regardless of the final look, I think it safe to say that fans of PTO will be eager to get their mittens on your Burma-themed HASL 'zine next summer. I look forward to seeing the final product.

Probably the best site currently (2015) on ASLSK on the internet period. Not to mention the great visual aids.

Wow. Very impressive. Keep it up.