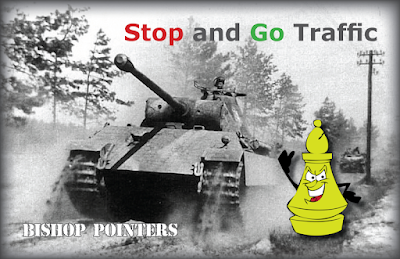 Recently players have posted questions online about Moving, Motion, Starting, and Stopping, and how these interact with C6 Target-Based To Hit DRM (Dice Roll Modifiers). These questions appear cyclically, and I can recall answering them for as long as I have played ASL. Much of the information in this article appeared in Ole Bøe’s “Stop and Go Traffic” article, which originally appeared in ASL Annual ‘96. These old Annuals are available as PDF files from MMP, or can be picked up used from all of the usual outlets. I highly recommend you read the original as it's still informative. But for those who can’t, I offer a summary of that article here.1 Moving is more nuanced. The ASL Rule Book (ASLRB) doesn’t draw a clear distinction between the two primary uses of the term in the game. In its narrowest sense, Moving refers to a unit that is currently conducting ITS MPh. I should stress that only one entity can be said to be Moving (or “phasing”) at a time. However, a Moving entity can consist of more than a single unit. Multiple units can Move as a stack, including Armored Assault (D9.31), which allows an Armored Fighting Vehicle (AFV) and Infantry to Move together. Less common is a “multi-hex stack,” which uses a form of Impulse-based movement.3 In all cases the constituent parts of any Moving group of units are considered Moving regardless of which unit (or units) are actually expending a Movement Factor (MF)/Movement Point (MP) at a given moment. For example, a stack declares Armored Assault. The AFV expends a MP to start, and another to change Vehicular Covered Arc (VCA). Although the Infantry accompanying the AFV has yet to expend any MF, both it and the AFV are Moving, that is, they are conducting THEIR MPh (as a stack). Interestingly, the vehicle does not yet qualify as a Moving Vehicular Target, although it does qualify as a target for Defensive First Fire, which brings me to the broader definition of moving, namely the expenditure of MF/MP.

Rule section A8.1 states that the “portion [of Defensive Fire] occurring during the enemy MPh is called Defensive First Fire and can be used only vs a moving unit(s).” In my previous example, the AFV expended 2 MP. The AFV is therefore moving for the purposes of Defensive First Fire and can be fired upon based on either or both MP expended. The Infantry, however, cannot be targeted directly because they have yet to expend a MF.4 A similar situation occurs when a Stopped vehicle attempts but fails to dispense Smoke at the beginning of ITS MPh. While the vehicle is Moving—in the narrowest sense of the term, it's not moving for the purposes of Defensive First Fire, because it hasn’t expended a MP (D13.2). However, were the vehicle to end ITS MPh at this point, it would qualify for Defensive First Fire, because it's considered to expend all of its remaining MP in that hex (D2.1). This is a case where a vehicle has Moved (conducted ITS MPh) without actually moving anywhere. Confusing, I know. If only such a key concept as “moving” was spelled out in the rules, or defined in the Index.

A thorough grasp of the implications of each vehicle state and the distinction between moving and Moving, together with a careful perusal of the various charts, will greatly aid you in applying the correct DRM when the rubber meets the road.

Time to see how this all works in practice. 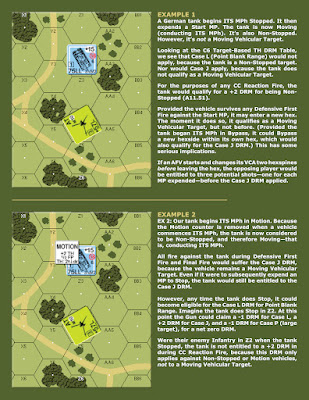 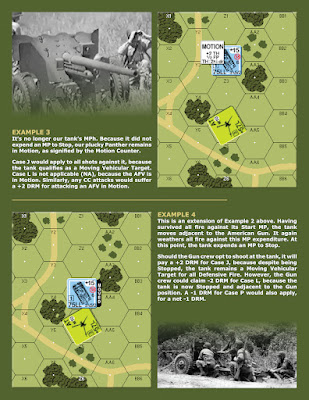 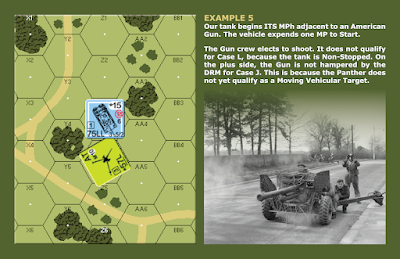 I hope you found this brief article useful. Knowing what DRM apply in a given situation is an important step toward mastery of combined-arms play. Please let me know if you spot any errors. Like you, I’m always learning. Now go read “Stop and Go Traffic!” It’s worth your time. -- jim 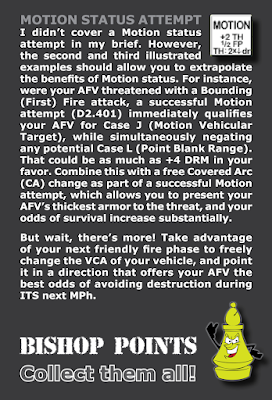 1. I (Chris) have taken great liberties editing this piece. Any errors that may have crept in are my own. Hopefully I have not deviated too far from Jim’s intent. You can find Jim's original text here.

2. The Advance Sequence of Play (ASOP) uses all-caps to underscore a) which unit (or group of units) is currently phasing, and b) at what stage a unit (or group of units) is in ITS MPh. A phasing unit conducts ITS MPh in three stages: START, DURING, and END. Although a unit is considered to be Moving, in the sense that it's the unit that is actively phasing, it may not actually be moving for the purposes of A8.1. With the exception of conducting a Search, any actions undertaken by a unit at the START or END of its MPh do not qualify as moving for the purposes of Defensive First Fire, despite the fact that the unit is Moving throughout ITS MPh.

3. In addition to Platoon Movement (D14.2), which allows two or three AFV to Move concurrently in Impulses, there are a number of other special cases where units may Move as a “multi-Location stack” or a “multi-hex stack,” such as Human Wave (A25.23), Cavalry Wave (A13.62), Banzai (G1.5), Convoy (D11.2), and Column (D11.52). Regardless of how many units participate in a Human Wave, for example, the Human Wave Moves as a single entity.

4. The Infantry, while Moving with the AFV, have yet to expend any MF, which means they do not satisfy the broader definition of moving. While the opposing side may declare a Defensive First Fire shot at the AFV, the Infantry may not be targeted (directly) because they are not moving for the purposes of A8.1. A question-and-answer confirms this:

Q. An MMC [e.g., a squad] stacked with a stopped AFV declares an Armored Assault. The AFV starts. Does this spent MP allow enemy units to Defensive First Fire at the MMC?

Hey everyone, please let me know if there are comments on this article, particularly if I have made a mistake. I get these reviewed pretty extensively but errors can and will creep in. More importantly, if there is a topic you would like to see me tackle, please let me know. I have three more topics in some semblance of completion. I hope you find these helpful. -- jim