BP-2 Converting a Spotting Round 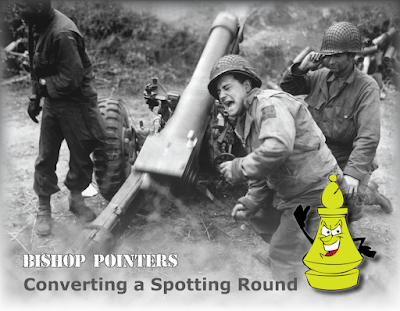 Converting a Spotting Round to Fire For Effect

In August 2021, I attended the ASL Scandinavian Open tournament in Copenhagen. The French have Offboard Artillery (OBA) in WO33. Walking around the room, I twice observed players Convert a Spotting Round (SR) to Fire For Effect (FFE) incorrectly. “One-Eyed Jacques” is an ideal case study for this all too common error.1

How to do it right

I have excerpted a section of the C1 Offboard Artillery Player Aid—commonly called the OBA Flowchart—that I will be referring to throughout this article. In order to Convert a SR effectively, you need to understand what’s really going on at this stage of the OBA process. Once you grasp these subtleties, you’ll increase your prospects of placing a Fire Mission significantly. And you’ll be better equipped to frustrate your opponent’s attempts to use OBA against you. For ease I have labeled the two decision-making rectangles in our section of the chart “A” and “B.” I also included the errata from ASL Journal 11, which instructs us to change “AR” (Artillery Request) to “SR” in rectangle B.2 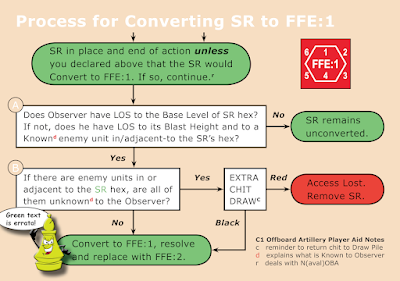 For our purposes we will assume that you have successfully navigated the flowchart to the point where you have maintained Radio Contact, announced your intention to Convert, rolled for accuracy, and corrected the SR (if necessary). You are now ready to Convert the SR to FFE.

It’s not enough to simply announce your intention to Convert a SR, as some players presume. There are a couple of crucial conditions that must be met before a SR can be Converted to FFE.

The process begins with rectangle A. One of two conditions must be met at this stage before we can continue the Conversion process:

For this and other OBA actions, concealed units in non-Concealment Terrain are considered Known to the Observer. (Footnote “d” after the word “Known” in rectangle A reminds us of this fact.)6

If the Observer fails all or part of either test, we follow the “No” path to the green stadium, (hereafter oval) to the right of rectangle A, which leaves the SR in place but “unconverted.”

In sum, both conditions rely on an Observer having LOS to where the SR has landed. The second condition is complicated by the need to have LOS to a Known enemy unit too.

Let’s assume that we’ve met the tougher, Blast-Height condition in rectangle A. Following the “Yes” path to rectangle B, we are asked if are there any enemy units in or adjacent to the SR hex, in what is otherwise known as the Blast Area of a HE Concentration. And if so, are all of them unknown to the Observer? Because our Observer had to have LOS to a Known enemy unit in the Blast Area in order to get to rectangle B in the first place, we can respond with an unequivocal no. The “No” path leads directly to the green oval below, allowing us to Convert the SR to FFE:1.

We would take the same “No” path if our Observer had LOS to the Base Level of the SR hex (rectangle A) and there were no enemy units in the Blast Area (rectangle B).7

But what happens if all of the enemy units in the seven-hex Blast Area are unknown to the Observer? We sidestep. The “Yes” path from rectangle B leads to a square that instructs us to make an extra chit draw.

If we draw a black chit, we proceed along the “Black” path to the green oval and Convert. Should we draw red, we sidestep again. The “Red” path leads to a rather unfriendly red oval with three, dire consequences. Not only does the SR not Convert, but it’s lost altogether. Adding insult to misery, Battery Access is also lost.

Harassing Fire is a special case. While all rules pertaining to enemy units in or adjacent to the SR remain in play, any units located in the outermost hexes of a Harassing Fire Blast Area are ignored, regardless of whether they are Known to the Observer or not. Provided the Observer has LOS to the Base Level of the SR hex or to the Blast Height, and there are no unknown enemy units in or adjacent to the SR hex, the SR will Convert without the need to make an extra chit draw. 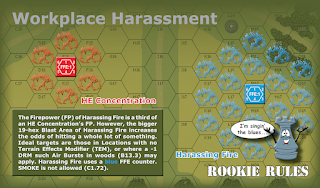 For this section please refer to the illustration below. The Observer is in 13aI5 on level 2. Five SR are on the board labeled SR:A through SR:E. I will discuss each in turn. 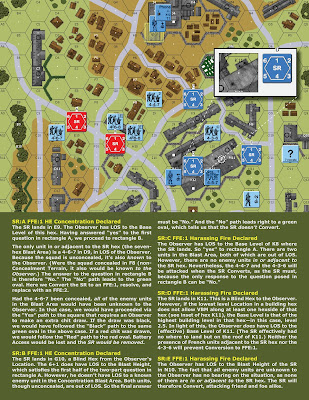 Clearly, there is more to attacking with, and defending against, OBA than offered in this brief article. If you would like to see more about this or some other topic, let me know what interests you and I may take it on. I hope you found this useful. Should you spot any errors, please let me know so that I can correct them. -- jim 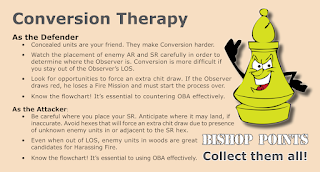 1. As editor and de-facto “ghost writer,” I’ve again mutilated another of Jim’s gems. I assume full responsibility for any errors that remain or may have crept in due to my meddling. For the most part, I’ve expanded on Jim’s content, although some sections have been extensively rewritten. Hopefully, I’ve conveyed his central points in a coherent manner. Compare with his original post here.

3. According to the Index definition of Base Level, if the lowest level Location in building hex does not allow VBM along at least one hexside of that hex, the Base Level is that of the highest building level in that hex [EX: The Base Level of 20C7 is 2½; that of 20D7 is 0]).

4. Low Visibility conditions such as Fog (E3.31), Night Visibility Range, and artificial Illumination present special challenges for OBA Conversion that are well beyond the scope of this article.

5. Be careful not to confuse “Known” enemy unit in the context of OBA actions and “Known Enemy Unit.” The latter is defined by the Index as “any unconcealed, non-prisoner enemy unit—even one which is broken or in Melee—which the unit in question currently has a LOS to.” In contrast, an Observer will consider a concealed unit not in Concealment Terrain (e.g., in Open Ground) to be a “Known” enemy unit, as explained in the next endnote.

6. Footnote “d” on the last page of the C1 Offboard Artillery Player Aid states the following: A Known enemy unit is an unconcealed enemy that you have LOS to. However, Concealed units in non-Concealment Terrain [EXC: night, Winter Camouflage] and in LOS of the Observer are always considered Known to him for his OBA actions.

Glad to see you still publishing. Your graphic examples of ASL play are best I have ever seen, and save them all for my personal use.
Keep up the great work and hope to see more posts.

Thanks for the kind comments Mark.

Apologies for the late reply. Your comment only appeared when I refreshed the comments pending page today. :(

On the bright side, I published another article in this series yesterday. It was supposed to be on Gun Duels, but that one is waiting on some feedback from Perry first. Instead, I expanded upon Jim's post dealing with CH on the ITT.