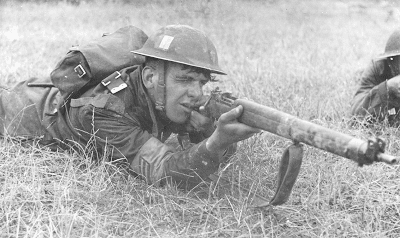 BattleSchool is many things. My rationale for beginning the project, however, was to help improve game play. I wanted to help new, as well as more seasoned players, get more out of ASL. In the process, I hoped to improve my game too. There are several schools of thought with regard to how to become a better ASL player.
Some argue that the best way to learn is to play. Play fast, and play lots, is a familiar refrain. There is a lot of merit in this approach. I know from personal experience that I have learned a great deal from playing at casual events and tournaments. I have also come to appreciate the importance of playing as many different people as possible. Virtual ASL (VASL), the online ASL interface, has certainly made it easier to play more people, more often. But as my rifle coach* used to say, “only perfect practice makes perfect.”
For most of my ASL “career,” I played one guy on a regular basis. Needless to say that if we got something wrong, we didn’t know until someone else pointed our mistake out to us. I remember playing a fellow, who like me, had been playing ASL for decades. I met him a few years ago, but we were playing a scenario last year when he questioned my ability to transfer support weapons (SW) between units during the Advance Phase (APh). “Hey,” he said, “I didn’t know that you could do that.” Well, as it turns out, neither did I until I had re-read section A4.431 (section 3.7 in the Starter Kit rule booklet) for the umpteenth time! It’s not that I was making a mistake by not transferring weapons. But I was selling my troops short by never taking advantage of this rule. [See my Starter Kit article, “Getting the Lead Out,” for a tip on how to capitalize on this rule.]
However, as helpful as it is to discover these little gems, I can hardly expect to become a competent player simply by collecting rule tidbits like so many Easter eggs. I need a more structured way of learning and applying these rules if I am ever to become competent. Of course, I could, as some people do, read the entire rule book, take notes and study the heck out of it. But then that doesn’t sound like a whole lot of fun, even if I had the time.


Programmed Instruction
One of the things that helped get me hooked on Squad Leader back in the late 70s was the programmed-instruction method of learning the rules. This method worked well for learning the basic game. Beyond that, you were on your own. Paratrooper, and the Chapter K Training Manual that it contained, was supposed to do for ASL, what programmed instruction had done for Squad Leader. The “training” module was not a success—for a number of reasons that I won’t go into here. In 2004, Multi-Man Publishing (MMP) released its ASL Starter Kit (ASLSK) series.


ASLSK is an excellent introduction to the ASL system. Indeed, the rule booklets that come with these Kits are ideal for getting your squad leaders up and Double-Timing quickly. But repeated forays into the booklets reveal the weakness of the phase-sequenced format. Granted the definition section is useful, but it is a poor substitute for a comprehensive index. Moreover, the rules required to play even the most basic scenario in ASLSK1 are scattered throughout the rule booklet. Therefore, despite being only twelve pages long, the lack of an index in the ASLSK1 rule booklet can make finding a rule reference time consuming during play. Like the ASL rule book proper, the ASLSK rule sets offer no advice regarding how to employ rules for tactical benefit. Nor do either of these manuals offer much in the way of broader tactical advice or operational guidance. It’s as if you were given a referee’s handbook and then asked to captain the team. Together these shortcomings hinder learning and impede development of a deeper understanding of the game system.

BattleSchool Method
Using a systematic approach, BattleSchool aims to build player confidence. We start with the basics and build upon each step in the process. Imagine that you want to learn how infantry movement works. First, we explain the rationale behind the various forms of movement. Next, we review the rules in a way that is easy to understand. We reinforce our explanations with amply illustrated examples and player aids. Afterwards, we encourage the reader to practice what he or she has learned.

Along with recommending suitable “practice” scenarios, we provide a BattleSchool scenario designed specifically to put into practice the lessons learned. Each scenario comes with a BackGrounder article. This article provides some added historical context for the scenario, including maps and photographs. The BackGrounder also features commentary on scenario design, special scenario rules (SSR), and general tactical advice. (The latter can be read before or after playing the scenario.)

In a nutshell then, each of our articles (or sets of articles) comes with a scenario (or scenarios) that are designed specifically to put into practice the material covered in the articles (and the BackGrounder). Aside from articles on rules, we intend to provide a series of articles that focus on tactics, “grokking” or deciphering a scenario, planning a defence or an attack, and most importantly, how to avoid failing your personal morale check during play.
It is my hope that a systematic approach to learning will help players not only stick with ASL, but more importantly, have a lot more fun while playing The Game.
*My coach had been a sniper with the US Army Rangers in Vietnam—a Canadian volunteer, by the way. He instilled in us the importance of practicing, and more importantly, the importance of not reinforcing bad practices. Our team cleaned up at the nationals that year, and I won more awards and matches in four months than I had in my previous 10 years in the army. I suspect that my coach was on to something.

Can't wait for you to release these... I'm just getting back into ASL

What is the progress on this project? Just listening to te 2 half squads and your interview w them - interesting stuff.

Unfortunately the project has languished as the blog has taken up more and more of my time. I have posted extracts from some BattleSchool articles on Sitrep. See the Starter Kit page for a couple of examples.

Totally understand time constraints. But finding this now, in 2019, it still seems a gem of an idea. I'd love to see this---and really enjoyed reading through all the Starter Kit articles you've posted.

I really like the idea of /playing through/ new rules and a conversational approach to scenarios/the game/the thought processes behind the tactics. I agree that this is how people actually learn. Even when I'm going through the rules on my own, I often find that I'm talking to myself---very conversational, very much trying to attach the meaning for the rule to some real world equivalent.

Thanks for all your work. And if this project ever takes the spotlight, I think it will help a lot of people! :)