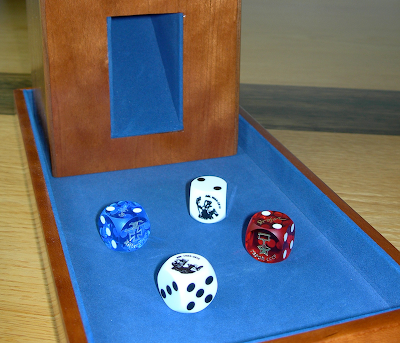 My apologies for not posting the result of this raffle earlier this week. Out of respect, I wanted to post a tribute to Ian Daglish first. Ian was a major figure in the ASL community. He died in a plane crash over the weekend, not far from his home near Manchester, UK. Please refer my earlier post today.
My wife Helen loves the sound that dice make as they tumble down my dice tower. So I recruited her to roll dice in order to select a winner. Each “follower” of Sitrep received a ballot, or one roll of the dice. A follower who posted a comment, received a second roll. Finally, a follower who signed a comment with his or her full name received a third roll.
Helen rolled a full set of four ASL Anniversary BattleDice. The lowest roll of four dice would win. After rolling for everyone, we had a four-way tie. The lucky number? Seven.
Peter Kennedy and “Drasl” managed to make it to the finals despite having only one roll each. Kevin Horner and Joshua Speelman each had three rolls, but their lowest rolls were seven. Helen rolled once more for each of the finalists and Kevin emerged as the winner.
Kevin hails from the United Kingdom. He is an enthusiastic, and relative newcomer to the hobby. Although he has wargamed since his early teens, he has done so primarily with historical miniatures. He and longtime friend Hamish Hughson have been gaming since the early 90s. Hamish would occasionally broach the subject of ASL, but Kevin remembers taking one look at the size of the rule book and thinking “that looks far too complicated!”
Persistence evidently works. In 2009, Kevin capitulated and purchased the ASL Starter Kits. He admits that, at first, ASL was complicated. The acronyms were probably the biggest hurdle, he reflected. However, once he had grasped the basics, he was truly hooked. He attributes this partly to the fact that his first few games “went down to the wire, and virtually the last die roll.” This is what makes ASL so compelling. The game is seldom over until the last shot. 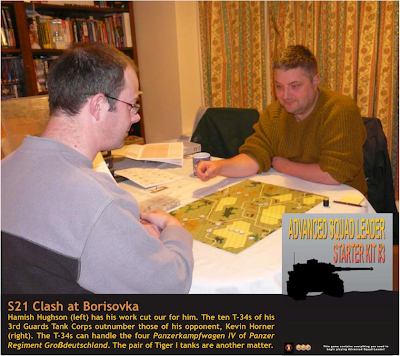 A number of people and resources accelerated Kevin’s apprenticeship. He found the ASL forums on GameSquad to be particularly useful. Through the forums he met “a fantastic guy in Texas.” Using Rodney Kinney’s Virtual ASL (VASL) interface, Pat Ireland was able to walk Kevin through the basics of infantry combat.
Kevin also has found Jay Richardson’s Starter Kit tutorials to be of lasting value.1 Jay, who lives in Kansas, posted his tutorials on BoardGameGeek. Peter Kruijt of the Netherlands typeset them. Kevin printed and bound them, all 133 pages! Kevin finds the examples of play in the tutorials particularly useful.2
Kevin also discovered Sitrep, Ian Willey’s ASL blog Wall Advantage, and Pete Phillip’s long-running ASL newsletter View from the Trenches while browsing the ASL forums on GameSquad.
Illness compelled Kevin to take a break from play for much of 2011. Happily, he is feeling better and enjoying the opportunity to get back in the game again. “Clash at Boriskova, an all-tank battle from Starter Kit 3, was his first foray into armour. He tells me that it was a very good introduction. It was also an eye opener for him. His preconceptions regarding distance relative to vehicle movement rates were shattered.
Now that he has had a taste of each major element in ASL, Kevin has decided to take the next step. He has already begun acquiring regular ASL modules and publications. In fact, he used his prize money to purchase some hard to find, and out of print ASL material. As for his Starter Kit material, he has no regrets. On the contrary, he maintains that they have proven invaluable in more ways than one might expect. “Thanks to them,” he said, “I have a nice selection of American counters.”3

Kevin choose a set of five, precision “Tommy” dice for his prize. His $20.00 gift certificate went toward a couple of Winter Offensive Bonus Packs, and Action Pack 8. It appears that Kevin is hooked on ASL. ;) Thanks Hamish!
Congratulations Kevin on winning our first raffle!
Roll bayonets!
Notes
1. BattleSchool paid tribute to Jay Richardson’s efforts (and Rodney Kinney for his VASL program) in a  BattleSchool-sponsored contest on GameSquad in 2010.
2. The tutorials cover all Starter Kit rules from infantry through Guns to armored fighting vehicles (AFV). You can download Peter Kruijt’s typeset version here.
3. With the American module Yanks currently out of print, I agree wholeheartedly with Kevin’s observation. The bulk of American counters in my personal collection were taken directly from Starter Kits. My brother-in-law has my old counters from Yanks. I much prefer the new counters to the old ones.
Posted by Chris Doary at 18:39

Thanks for the great prizes Chris, you and Helen are doing a fantastic job! RE the above scenario, nobody told Hamish he should have his work cut out.

Poor setup by myself hastened his victory, but still very enjoyable and looking forward to the rematch.

Have just found the subscription link on the front page, so Sitrep updates now appear on my homepage, very cool.