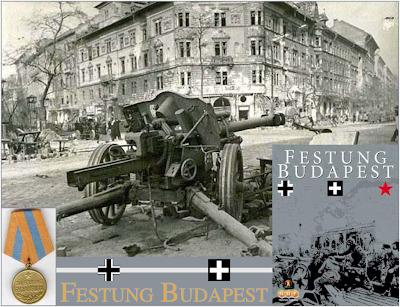 My apologies for this sloppy post. It was a work in progress. I did not want to delay the news. The module is massive and the most interesting that I have seen from MMP. You can have a look at some of the details below. Most of the description is lifted from the MMP website. However, if you want to get a better idea of what is inside that big grey box, check out my new post here. 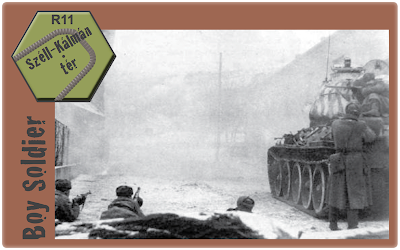 Festung Budapest
The Siege of Budapest, 1945
With the issuance of Order Number 11 on 1 December 1944 declaring Budapest to be a “fortress” city, Hitler effectively sealed the fate of 70,000 defending Axis troops, and approximately 800,000 civilians.
Festung Budapest, the eighth Historical ASL module, takes players to the western side of the Hungarian capital. Seventeen scenarios and three Campaign Games cover the fighting on the Buda side of the Danube just west of the Castle Hill area during the period from 1 January through 10 February, representing the bitter struggle for the heart of the city.

Festung Budapest comes with 4 maps and 9 counter sheets. In addition to the entire German SS MMC order of battle (from 8-3-8 to 4-4-7, including assault engineers), counters are provided for several new types of Hungarian infantry: SMG units, assault engineers, the fascist Arrow Cross Militia, and the anti-communist Vannay Battalion, as well as the Buda Volunteer Regiment, Hungarians fighting for the Russians. Counters are also provided for both Hungarian and Russian air support. There are also special counters to distinguish between certain German units such as the 13th Panzer Division and Panzer Division Feldherrnhalle.

This looks pretty cool. Might have to be my first ASL preorder. Especially considering it'll be out in a couple of months.

Thanks for the heads up Chris, well I know what I'm asking for from Santa, ASL tokens

Really looking forward to this release! Having been on a hiatus for several years I have spent much of the last few months re-constituting my collection and adding all the new stuff I missed and the new stuff I am now back for! This looks fantastic! Already pre-ordered and hoping for February fun!