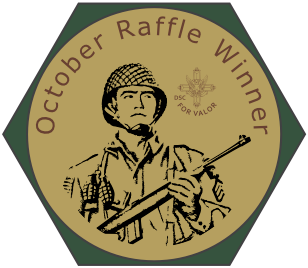 Where did October go? It is the first of the month again. Time for another raffle. There were over 90 Squad Leaders in the October draw. Everyone received a roll of the dice equal to the number of months that they have been following Sitrep. A select group had four kicks at the proverbial cat. The extra rolls paid off for our two finalists, both of whom joined Sitrep in July.
Helen used our new American and Commonwealth dice set for the raffle. It took her about an hour to roll for everyone. Once again, no one finished with four aces. The last two Squad Leaders standing were Chris van Wyk and Josh Walles, tied with a score of five.
Déjà vu
Chris van Wyk lost the tie-breaker. Chris is one of a small group of ASL players in South Africa. Being off the well-trodden ASL path, Chris is resourceful out of necessity.

If I am not mistaken, Chris founded the CyberASL Open in 2005. The Open is an international ASL tournament where play-by-email (PBEM)—using the Virtual ASL (VASL) interface—is the default mode of play. The tournament runs annually. It is divided into rounds that must be completed within two months. Otherwise, CyberASL is a fairly flexible event. If you are strapped for time and opponents, you may want to consider entering the CyberASL Open in 2012. Who knows, you may end up playing Chris.
Indeed, stranger things have happened. In April of last year, Chris won a raffle among BattleSchool playtesters. And he came close to winning the Sitrep raffle this month. I have yet to play Chris, probably because I am not the PBEM type. Yet, here he is again, taunting me to pit my luck against his. If I have to rely on the VASL dicebot for luck, I may as well concede now. :)
And the winner is...

Sources tell me that Josh Walles, our October winner, is currently camped out in Lubbock, Texas. According to one disgruntled resident, Lubbock is an ASL desert. It could be worse, and it is. Josh is afflicted with that most common of ASL ailments. He seldom has enough time to game. I have this on good authority, because Josh admitted as much on his ASL blog, Count Zero’s Corner. Josh is not fond of playing on VASL either—he spends enough time glued to a screen at work. (I guess that means he will not be signing up for the CyberASL Open any time soon.) However, if he is ever able to find a local face-to-face opponent, we have him covered. Josh has won a set of our newest precision dice, and a $20.00 KitShop gift certificate.
Josh will receive our ASL Oktoberfest Anniversary set of four, ⅝” precision dice. An American paratrooper takes pride of place on the white die of the US set, while a Distinguished Service Cross occupies the one-spot on the green die. The Commwealth pair has a “Tommy” on the white die, and a Victoria Cross on the amber die. The ASLOK Anniversary dice are the same size as the German and Russian dice that make up our ASL Anniversary set. I will post a bit of background on the design of the Oktoberfest set a little later. In the meantime, you can view some drawings of them on the KitShop page.
Congratulations Josh. Hope you get a chance to use your new dice soon.
What are you waiting for?
There are two more raffles to come in 2011. Increase your odds by joining Sitrep today. Become a Squad Leader. Visit regularly. Win cool stuff. The next draw is on 1 December. Do not miss out.
Note: Winners can contact us by email to claim their prizes: battleschool@rogers.com
Posted by Chris Doary at 23:28

Well I say he deserved the win, really enjoy his blog (noticed how many active blogs we have now?)

Thanks, Chris. I must say, I'm a bit surprised and really grateful. The people in this hobby continue to astound me. All absolutely world-class chaps. Interestingly enough, I'm teaching my daughter ASL (at HER request) and starting into PBEM. I sense some good times ahead, aided by some new lucky dice... :)