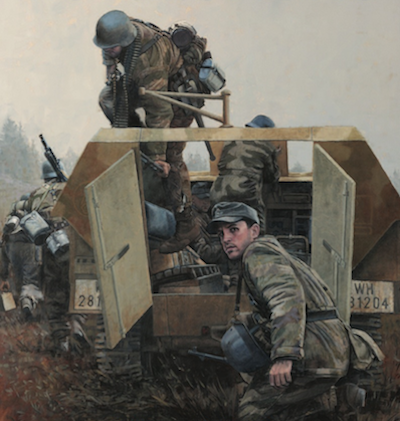 Christmas is coming... in January. Apart from getting their hands on a copy of Festung Budapest, attendees at Winter Offensive 2012—Multi-Man Publishing’s annual tournament—will have a chance to pick up the latest Winter Offensive Bonus Pack (WO BP3). Proceeds from the sale of this pack will go to support the WWII Foundation. For some, this is reason enough to purchase the forthcoming WO BP3. But for those who “already gave at the office,” here are some other reasons to spring for the pack.

Inspired by historical topography
The latest Bonus Pack will feature two special mapboards (64 and 65), which combine to form a sizeable village. The boards mate along one edge, while the remaining edges retain the geomorphic configurations of a standard ASL mapboard. These particular boards are a quasi-historical representation of Marvie, Belgium. Moreover, they are the first in a series of “double-wide” boards that will be modelled on, or rather “inspired by,” historical locations. This is an exciting development for MMP. It is also a nod to the pioneering efforts of Third-Party Publishers who have developed similar mapboards in the past.1 Best of all, the new boards signal a welcome (official) shift toward a more realistic representation of the battlefields over which many of our ASL engagements were fought. 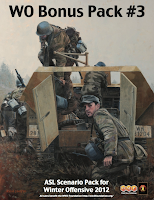 The pack contains three scenarios from noted designer Pete Shelling. Each scenario uses at least one of the new mapboards. The first scenario, WO6 “The Heat is On,” is the odd one out. It uses board 65 to recreate a combined-arms battle on the Eastern Front in 1942.
The remaining scenarios occur in Marvie, Belgium. Both scenarios bring to life the bitter battles that occurred near Bastonge, shortly before Christmas 1944. And both star the hard-pressed riflemen of the American 327th Glider Infantry Regiment of the 101st Airborne Division. Just two rifle companies (Fox and George) stood in the way of the Panzer Lehr Division as it drove on Bastonge during the Ardennes Offensive. The glidermen at Marvie not only checked the German advance, but also gave the German armour a bloody nose—with a little help from their friends in the American 10th Armored Division.
The first scenario is WO7 “Hell for the Holidays.” The second, WO8 “Silent Night, Deadly Night,” takes place, well, at night. Night scenarios are few and far between in ASL. Needless to say, I am looking forward to playing this latest offering, not least because it takes place on new ASL turf.
I recall seeing some of these scenarios being tested at ASL Oktoberfest last month. Perhaps it slipped my mind, but I did not realize that they were intended for WO BP3. I do remember commenting to Pete (and Bret Hildebran) during their playtest, how different the boards looked. I think you will agree that the works-in-progress above have a more natural feel to them, especially when compared to their more linear cousins.


Here to explain some of the features of MMP’s new lifestyle community is ASL real estate guru Tom Repetti:
While being historically accurate enough and meeting the needs of Pete Shelling and Chas Argent, there’s some other general board ideas (stolen from the masters like [Bob] Macnamara, [Don] Petros, [Charlie] Kibler, and [Ken] Dunn) that seemed to work themselves nicely into the design:
I think the 64/65 village has some nice features that make it worth having.
Sold! I must admit that I was wondering about the square plots of brush. I had assumed that they were patches of grain newly converted to brush, and that the contours would be adjusted in the final design. Clever idea. Corn, or maize, is more difficult to move through than grain is.
Historically speaking
I am not very familiar with the actions around Marvie. For those interested, there are plenty of websites offering firsthand accounts of the action. I will, however, leave you with a map covering the night attack of 23 December.
The new Winter Offensive pack should be available on the MMP website in February 2012. The pack comes with two mapboards—one more than usual—and three scenarios. If I understand Chas Argent correctly, Pete Shelling has designed other scenarios that will take advantage of these new “double-wide” boards. I can only speculate with regard to the price of this pack. Still, my guess is that it would not be more than $15.00. Is it worth it? Yes. But only if you enjoy:
Now if historical anecdotes are more your thing, then perhaps this will entice you. On 22 December 1944, the Germans delivered a surrender ultimatum to the besieged defenders of Bastonge. A delegation of two enlisted men and two officers approached the American lines at Kessler farm, about a mile southwest of Marvie. They were met by men of Fox Company, 2/327th Glider Infantry Regiment.
The German officers were escorted back to company headquarters where they delivered a typed ultimatum to the Americans. There the Germans waited. Finally, after almost two hours, they received Brigadier-General Anthony McAuliffe’s famous reply: 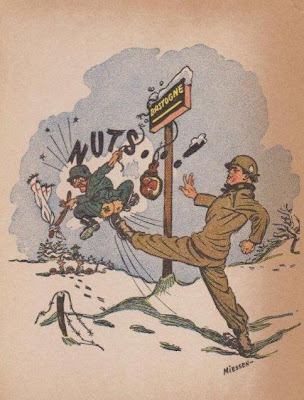 N U T S !
The German delegates were baffled by the US response. Unsure what the American slang meant, they returned to their lines. Within two days, the same men of Fox Company were in the thick of it, as the Germans redoubled their efforts to break through to Bastonge.
Notes
1. It appears that Gary Fortenberry—the man behind the new mapboards in Action Packs 6 and 8—had approached Avalon Hill (AH) around 1983 with the double-wide board concept. At the time, ASL was in the development stages, and there was no enthusiasm for a new style of mapboard. Gary attempted to win over fellow hobbyists in Texas and Virginia, during the late 80s and early 90s, respectively. And he apparently had no takers in Ohio, when he began attending ASL Oktoberfest. Gary was convinced that the concept had merit and would be welcomed by the ASL community at large. It took a company with an open mind and vision to get it out there first.
That company was Heat of Battle. In 2000, this Third-Party Publisher released a scenario pack called High Ground. According to Mark Pitcavage, a well-known chronicler of things ASL, this marked the first time that any ASL publisher had produced geomorphic mapboards that had a dedicated “mapmate” for one of the board edges. This allowed the creation of a large, contiguous hill mass spanning two board widths, as shown below. 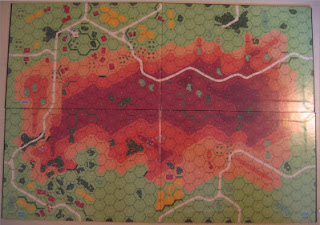 Action Pack 4, published by MMP some years later had a novel way of configuring two of its mapboards. Boards 54 and 55 could be joined along the folded edge of the two boards so that their Q-rows abutted each other. To date, I think that the only scenario to take advantage of this feature is Ian Daglish's AP34 "Bocage Blockage." In is a novel idea, but it does not alter the essential nature of the playing area like the so-called double-wide boards do. (Boards 46 and 48 also "mate" in this fashion.)

Looking forward to this now annual pack. Nice to see they have taken up the new board ideas, adding to the Double Wide the styles and combinations are really wide reaching

This looks really interesting. I hope they continue down this road of map innovation.

Bryan, what a coincidence that you just posted. I am just finishing up a post for the November raffle. You missed winning by the slightest of margins, sorry.

Thanks for reading. I know Gary has more maps and scenarios in the works. Provided we keep buying his Action Packs, MMP will keep printing them. :)

Between the Black Friday sale, and all the stuff coming out at WO, I need some time to catch my breath.