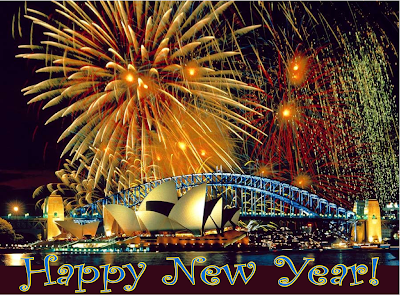 Happy New Year! The results are in. We have a winner, three winners in fact.
Helen made 660 rolls in order to arrive at the winner of our December raffle. She claims to have spent more than four hours rolling dice. I pointed out to her that tea breaks should be deducted from this estimate. She countered that even non-unionized employees are entitled to paid breaks. Suffice it to say that it took a long time to roll and record the results.
Helen wanted to use her “Christmas” dice for the raffle. In between work and Christmas obligations, we found time to play a couple of ASL scenarios.1 Being a big fan of Christmas, Helen insisted on replacing her white die with a green die. When paired with the red “Tommy” die, it certainly looked festive enough. Thankfully I am not colour blind. 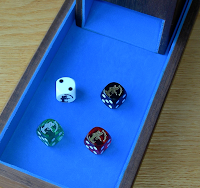 For the raffle, she added a white die and her black “Christmas” die to round out her dice-tower quartet. In spite of all that rolling, her quartet avoided the extremes. There were no serious train wrecks, or double boxcars. Several contestants yahtzeed a roll, but no one was able to coax a pair of serpents out of the tower.2 The lowest roll was five.
Three Squad Leaders tied with five. All joined Sitrep in July, when we launched our blog. When Helen read the names off to me, I had to laugh. When she rolled to break the tie, I was dumbstruck by the result. The winner had only a one percent chance of reaching the finals, and then only a one-in-three chance of winning the tiebreaker. He rolled a nine while his fellow finalists tied with fifteen each.
On the day that we announced the contest, one of our readers petitioned that an extra roll to be given to those who were currently unemployed. “Come on, purty [sic] please!,” he pleaded. Given the state of the world economy, and in due consideration of she-who-must-roll-the-dice, we opted for a bonus prize instead. To reiterate, we promised to give a “qualified” runner-up a prize. In order to qualify, the runner-up could not be following Sitrep under an alias, only a full name (first and last) would do, along with a personal portrait for an avatar. (Apes, pooches, and ‘toons—as cool as they might be—would not be good enough.)

Grey man
Because only three Squad Leaders got to the finals, we decided to award prizes to both runners-up. We awarded the runner-up with a generic grey avatar a special “third” prize. However, this particular runner-up is hardly a grey man. I know. He has grey hair. But that hardly distinguishes him from most ASL players, including me.
Phoenix Arizona is a sprawling metropolis with a strong board-gamer base. Brian Blad, the winner of our third prize, lives some distance east of downtown, in Apache Junction. Brian has a popular page on ConsimWorld (CSW), where the men of Multi-Man Publishing (MMP) hang their cyber hats. But perhaps Brian’s most noteworthy claim to ASL fame is that he is a member of the Bounding Fire Productions team who brought you Crucible of Steel last October.
Brian is also a regular fixture at the ConsimWorld Expo in nearby Tempe, where fans of monster gaming flock each June. MMP often has a presence at MonsterGame.CON, the central event featuring a host MMP and GMT titles. Although the Con is billed as a slice of gaming heaven, ASL is not the main attraction at the Expo. However, the huge tables cry out for The Siege of Cholm, Kampfgruppe Peiper, Onslaught to Orsha, and soon, Festung Budapest. At least one group gave Valor of the Guards a go this past summer.
Brian wins a trio of BattleSchool “Tommy” dice, and a $10.00 gift certificate for our KitShop. Congratulations Brian!
Bob is back!
Our first runner-up hails from Lexington, Kentucky, and only recently returned to the ASL fold. Bob Callen took a ten-year break from ASL, but is back in a big way. He attended ASL Oktoberfest (ASLOK) this past year, joining his cousin Rodney Callen for an ASL extravaganza.3 Bob always seemed to be smiling when I passed his table at ASLOK in October. He now has something else to smile about. 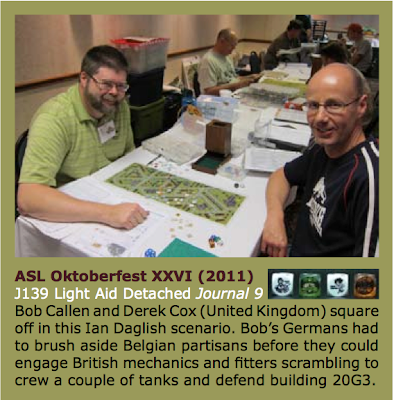 Chris Dawson, one of our regular readers, was partly responsible for the creation of a prize for the runner-up of our year-end raffle. So in some ways, Bob has Chris to thank for his new set of ASLOK BattleDice, along with a $10.00 gift certificate for our KitShop. Congratulations Bob!
Singing in the rain
I can hear the mumbling, nay the crying and cursing. “Fix!” “Rigged!” “Loaded dice!”
The winner of our December is Chris Dawson of Portland, Oregon. Yes, this is the same, unemployed Mr. Dawson who campaigned for an extra ballot in the draw. He failed to gain an extra ballot. But won just the same. The irony of it all. Chance and circumstance could not have provided a more bizarre and unexpected outcome. Chris will be singing in the Portland rain.
Chris is an old Squad Leader player from back in the day. He was immediately drawn to John Hill’s creation when it was released in 1977. Chris eagerly snapped up each subsequent gamette in the system. He also played a lot of other Avalon Hill titles. His favourites were Russian Campaign, Gunslinger and Knights of the Air—the only non-ASL games that he still owns. 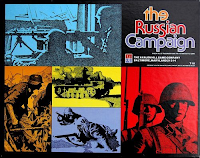 Chris purchased ASL the year that it was released. He played regularly with a local buddy. In the early ‘90s, Chris moved away, and his gaming lapsed. About two years ago, Chris related, “the bug hit me again.” He tracked down The Berserk Commissars, an ASL group in Portland, and hooked up with a great bunch of guys. Chris admits that most of his new-found opponents are much better players than he is. He is nevertheless glad to have an opportunity to improve his game. Chris will happily play most types of scenarios, although lately, he has been drawn to the jungle. It sounds like Blood and Jungle, from Bounding Fire Productions may be something that he would appreciate. 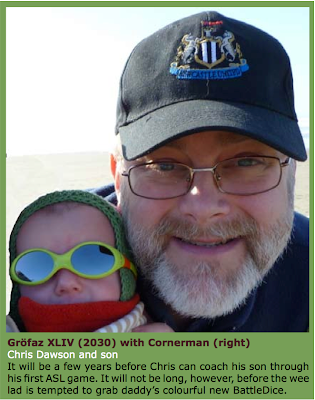 Like many in our age group, Chris has had to go back to school and retrain in order to find work in our rapidly changing global economy. We wish him well in his future endeavours. We also hope that he will continue to find time to be an active member of our hobby.
As our year-end raffle winner, Chris has the choice of one of four gift packages, each valued at over $100.00. Chris may want to consult his fellow “commissars” in Portland beforehand, however. No doubt, they will be keen to offer plenty of advice. Congratulations Chris!
So what will it be? Enquiring minds want to know.


Chris chose BFP3 Blood and Jungle, from Bounding Fire Productions. It will be headed his way on 4 January.
Up, up, and away!
Helen and I would like to thank everyone for participating in our latest contest. We would also like to thank our subscribers and regular readers for taking time from their busy schedules to visit Sitrep.
Squad Leaders do not despair. More contests are in the works. For the first anniversary of Sitrep (1 July 2012) we plan to hold another major raffle. As with previous raffles, your chances of winning a prize are directly related to how long you have been following Sitrep.
I am not scheduled to work for the next six weeks. In fact, I may not be working at all come April. So I can readily empathize with those of you who are unemployed, or who have had to empty the piggy bank. With these factors is mind, Helen and I intend to raffle off, among other things, a copy of Festung Budapest. This special raffle will take place on Canada Day, six months from now. MMP plans to release this historical module in a few weeks. Here is your chance to own a copy of Bill Cirillo’s masterpiece without upsetting she-who-must-be-obeyed (SWMBO). Good luck!
Happy New Year!
Helen and Chris
Notes
1. On Christmas Eve, Helen and I played S45 Contested Settlement. She commented that it was her first time playing the Polish. The up-front Slovac defence proved too much for the Poles. On 28/29 December she took the Germans in S13 Priority Target. I gave her the balance. It was a close run thing. She managed to take two of the Bofors before the game ended. The 9-2 German leader was the equalizer. The scenario presents challenges for both sides.
2. Peter Palmer (Sydney, Australia) managed four “fives.” Rob Macdonald (Ottawa, Ontario) had an eye-pleasing quartet of “fours.” And a pair of gentlemen from the United Kingdom (Nigel Ashcroft and Oliver Gray) each scored “eight” with four “twos.” You may recall that Oliver won our November raffle.
3. Coincidently, I played Bob’s cousin at my first ASLOK in 2007. Rodney Callen is a far better player than I am. Unfortunately, his dice deserted him in J111 Prussia in Flames.


To claim your prize, simply send us an email with your mailing address.
Posted by Chris Doary at 13:46

Sorry Laurent and Bryan, only got home from work yesterday at midnight. Will finish the post today.

Ian: I am afraid that you will have to rely on my recollections of my first-year biology course at uni. But I think that I can still manage to distinguish between an ape, and ape-like. :D

Congrats to all the winners.

So, it sounds like we can expect six weeks of pretty regular updates and articles. I cannot wait to spend some pretty serious time reading on here. My calendar is cleared!

Seriously, Thanks for all you do, and I'm wishing you the best in the upcoming weeks/months.

Thanks to you both for running the contest, especially to Helen for rolling all those dice. Chris, I hope we get to play soon at one of the tournaments!

Even though I lost, that match with Derek was on of my best experiences at ASLOK this year. Derek is a first class gent and a pleasure to play.
Happy new year to everyone,
Bob

I have five or six posts in various stages of completion. Expect three posts just for Festung Budapest. ASLOK and CASLO AARs will follow at some point. I also have an article on ROF, a post for the Bridge page, and an intro piece on Totensonntag. FB has consumed most of my time since MMP announced its pending release. I will do my best to get these out in the coming weeks and months.

Derek is indeed a gentleman. I have played him twice, and would play him again anytime. He is a fine role model for ASL players. A good player, a consummate sportsman, and great company. He is the tournament director of Double One, an ASL tourney run just outside of London each June. Hope to make it there one day.

Thanks for the great give aways! I really like the dice. My wife got the hint and stuffed them into my Christmas stocking. Hope you all had a happy holiday season.

Glad to hear you like your new dice. Hope they are rolling low enough for you. :)

Helen and I have been quite busy since December. I have been doing a lot of work on FB. Also have some other things in the works.

We have some new BattleSchool dice arriving late next week. Nothing too fancy, mainly restock of our Sniper! dice and some new colours.

Good luck in the raffle on 1 February. Prizes will include some new dice and Winter Offensive Bonus Pack 3.