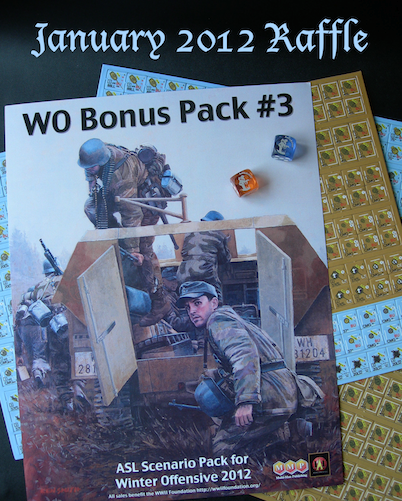 We have dubbed February “Buddy Love” month. Many of us have those special ASL buddies who have always been there for us. You know who I mean. Friends who are a pleasure to play. Friends who share your love for the game. Friends who are happy just to talk about ASL over a cup of coffee or a beer. I have one of these friends. We have been playing for decades. This month we pay tribute to these friends. Our raffle hopefully will spur you to thank a longtime friend.
Over 160 Squad Leaders participated in our January raffle. Squad Leaders received one roll of the dice for every month they have been following Sitrep. Helen used five Tommies for the rolls. The amber and light-blue Tommies were fresh out of the box, and it showed. Not one roll produced a five. Then again, no one suffered the indignity of a “dirty thirty.” The lowest roll was six. There was a quartet of sevens, but only a duet of eights, and a triplet of nines. 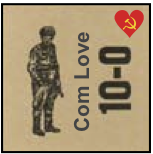 Ten was a surprisingly common sum, so common that we decided to do something about it. About 20 percent of participants had a low roll of ten or less. Incredibly, Rudi Großholdermann had a pair of tens, in addition to a nine! Below is a list of everyone who had a low roll of eight, nine, or ten: 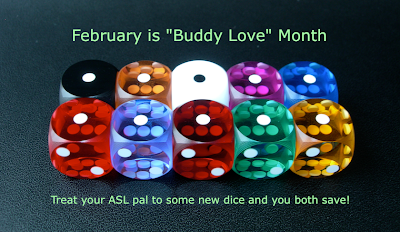 In order to help promote the theme for February, we are offering everyone on the list above a voucher for $10.00, or the cost of shipping, whichever is less. The voucher is valid for purchases of all precision dice, including packs of standard ½” dice. The catch? Well, you must purchase a set of dice for a friend. You do not have to purchase anything for yourself. We have a few “buddy packs” on our KitShop page in the event that you are so inclined.1
Our offer is valid for the month of February. However, anyone who takes advantage of this offer before 14 February will be entered into a draw to win a Winter Offensive Bonus Pack (WO). The winner of the draw, and his or her ASL “buddy,” will each receive a WO pack of his or her choosing. We have all three packs in stock.2
Plucky Sevens
There was nothing average about the sevens rolled in this month’s draw. Four gents vied for second place. One, Keith Hill of Maine, also managed a ten. But like Joshua Speelman in snowy Michigan, and Dan Sueyoshi in sunny California, Keith came up short in the tiebreaker. Each nevertheless receives a $10.00 gift certificate redeemable for merchandise in our KitShop. (For a copy of the February issue of our 16-page catalogue email us.) 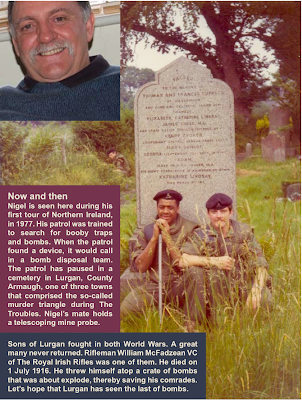 The runner up this month is Nigel Ashcroft of Chepstow, in the United Kingdom. He served in the Royal Horse Artillery during the 1970s.3 Nigel has been an active promoter of ASL in the UK for well over a decade. He has attended most annual ASL events in his homeland. Indeed, he was present at some of the earliest Intensive Fire tournaments during the late 90s. Nigel conducted a survey in the July 1998 issue of View from the Trenches. At the time, he and others were concerned about declining attendance at tournaments such as Berserk! and Intensive Fire.4
Today the tournament scene has witnessed a resurgence of interest, mirroring a burgeoning interest in the hobby as a whole. For instance, in January, the Annual Winter Offensive Tournament sponsored by Multi-Man Publishing had over 130 attendees! Only a few months earlier, Intensive Fire had a strong turn out, with 40 competitors. Unfortunately, Nigel missed the tournament due to a bout of the flu. Nigel plans to partly make up for this lapse by taking an ASL holiday this week. His foursome intend to sample a bit of Valor of the Guards (Stalingrad), “Suicide Creek” (New Britain) from ASL Journal 9, and perhaps some Kursk action, courtesy of Bounding Fire's Crucible of Steel.
In their own way, a legion of Nigels have helped not only to keep our game alive, but also to nurture the growth of our hobby. There are more people, in more countries, playing ASL today than ever before. Thanks for your dedication Nigel. And congratulations! You have won a copy of Winter Offensive Bonus Pack 3, and a $10.00 gift certificate. 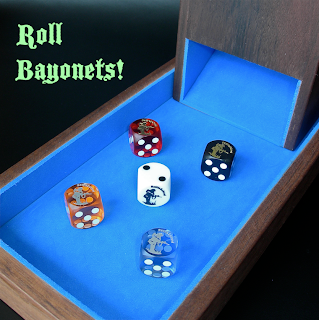 Red scare
I have known the winner of our January raffle for a couple of years now. He was in one of those ASL “sleeper cells” that can be found in most metropolitan areas. I recall paging someone on the ASL Mailing List in October 2009, when I received an unexpected message from a fellow named Martin Hicks:
So you’re in Ottawa, Ontario? I wouldn’t mind picking up another f-t-f game or two. I’m definitely not super experienced at ASL, but would like more chances to get better.
Well, he may not have been “super experienced,” but Martin did know how to roll well. But then, that was partly my fault. Martin is a practical fellow who generally eschews elaborate when functional will do just fine.
It took almost a year before our schedules aligned. We finally hooked up for a game on the eve of the Canadian ASL Open (CASLO) in 2010. Martin was rusty, but clearly was no “newbie.” He had the attack, and simply ran out of time—not uncommon in a small Schwerpunkt scenario like “The Hornet of Cloville.” He had other plans for the weekend, and had to pass on the tournament. He made up for it in 2011, by attending CASLO XV. But I am getting ahead of myself.
Martin and I played our second game after I had returned from the ASL Oktoberfest (ASLOK) tournament in October of 2010. Fresh from ASLOK, I was more practiced and prepared to play than Martin was. I was keen to play some Friendly Fire scenarios from the latest pack, especially those which utilized the nifty FrFA board that came with the pack. Martin was a sport. Apart from the aforementioned Schwerpunkt scenario, he had never played any third-party scenarios. We played several games from the new pack over the course of the next month or so. Martin’s level of play steadily improved. It was then that I made my mistake.
Eager to show off my new Soviet BattleDice, I encouraged him to give them a try in FrF49 “One Last Mighty Hew.” His Reds did most of the hewing. The man had a thing for rolling threes all game. His 107 “arty” piece began by obliterating my 9-2 stack at long range, and so it went. Martin left with a smile on his face, and with a set of new dice in his pocket. We had a blast, and have been playing on and off ever since. 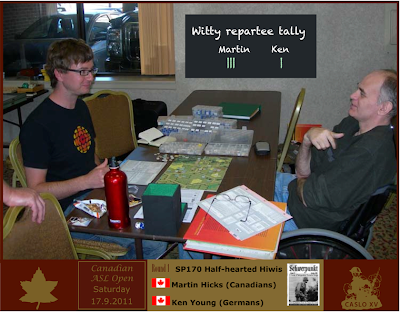 Martin is now a regular attendee of our local gaming meets. On his own initiative, he created an ASL mailing list for players in Eastern Ontario, and hosts the list on his server at no cost to us. He is also coaching a new player through ASL Starter Kit. This is all very encouraging, in part because Martin is younger than most of the players in our group. He and his protégé are the future of our hobby. Let’s hope that Martin is merely the vanguard of a new, and bigger cohort of ASL enthusiasts.
Martin wins a set of Countersmith German and Russian AFV turrets, a pair of our newest BattleSchool Tommy dice, and a $20.00 gift certificate.5 Congratulations Martin! 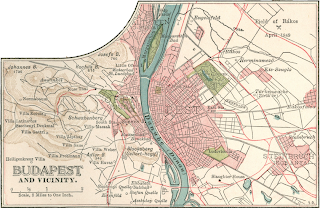 Holiday in Budapest
Just a quick reminder that, among other things, we intend to raffle off a copy of Festung Budapest in July. This special raffle will take place on Canada Day. If you have yet to join Sitrep, now might be a good time. Good luck to everyone in our next raffle.
Notes
1. There are two ways to go about treating your ASL mate. One, you purchase something for a friend and provide the shipping address of the recipient. Or two, you purchase a “buddy pack,” or two of the same item. In this case, we will ship to your address, unless instructed otherwise. We are happy to ship to separate addresses, but will have to bill you for the additional shipping fees.
2. At the option of the winners, the WO packs may be exchanged for equivalent credit in our KitShop.

3. Here is a bit of historical information that Nigel supplied to me regarding his unit. He was a member of The Rocket Troop, Oscar (O) Battery, 2nd Field Regiment, Royal Horse Artillery. The Rocket Troop gained fame at the Battle of Liepzig in 1813. The Troop had been seconded to Sweden. The Troop used Congreve rockets, along with their standard nine pounders, to support Swedish infantry. The Troop was the only British unit present at the "Battle of the Nations." So well did the Troop perform on the field against Napoleon, that the unit was accorded the right to incorporate the Swedish flag into their unit symbol. To this day, The Rocket Troop is the only British unit permitted to wear a foreign flag on its uniform, as shown in the image above right. Every October the unit receives a letter from the reigning Swedish monarch, thanking the Troop for its assistance in 1813!
4. Berserk! was effectively replaced by the Heroes tournament, which is held annually in Blackpool. See the tournament listing at left for details. Intensive Fire is still held in Bournemouth every October. Again see link at left. Since 2006, a third major tournament has been held on an annual basis. Double One takes place near Chelmsford—details on tournament list in sidebar. The Tournament Director of this last event is Derek Cox. I have met and played Derek a couple of times now. He is marvellous company. He undoubtedly runs Double One with the same charm and engaging manner as he displays on a personal level. If you plan to be in London this June, you will want to attend Double One. If you live in London, be sure to check out the link to the local club.
5. Yes, we carry Countersmith turret counters. We have had a few inquiries about them. They are in our catalogue, but we may add them to our KitShop page here on Sitrep a little later this month.
Posted by Chris Doary at 16:57

Looks like the dice roll low for me even if Helen is in charge!

Keep up the great work!!

I must have had box cars. It seems like I couldn't roll lower than 9 during the last scenario I played.

Thanks for the give away!

Thanks for following guys.

it is comforting to see that I get bad rolls even by proxy:( Of all the Battledice that I love, my favorite has to be the SNIPER die. Very Kool!

Dude, you came in third out of more than 160 people! Them's hardly bad bones.

Would you like another Sniper! die? Or do you want to save your gift certificate for our Buda Pack? ;)