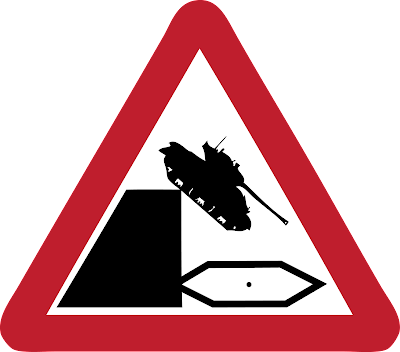 The following post is an excerpt from my article “Getting a Move On.” I have chosen it as my first Advanced Squad Leader Starter Kit (ASLSK) post for a couple of reasons. First, it deals with some very basic concepts of Infantry movement. Second, it is a subject that is too often overlooked.
Those of you who only own the first Starter Kit (ASLSK1) will be perplexed and surprised to find that subsequent ASLSK rule booklets have spelled out how to enter the mapboard: perplexed, because entry is somewhat intuitive; and surprised, because there is indeed more to entering the board than you may have suspected. Then there is the matter of exiting.1
Entry
Units may enter from off-board, either at the start of a game, or later as dictated by the scenario. Entry is a two-step process. It begins before the start of the Rally Phase (RPh) of the player turn in which your units are permitted to enter.2 Imagine that you are the ATTACKER—the player whose turn it is to move. Before you conduct any RPh actions, you first set up any off-board units that are scheduled to enter during your turn. You place these units in hypothetical hexes adjacent to the mapboard edge(s), in accordance with the entry restrictions on the scenario card.
In order to get the most out of your upcoming movement phase (MPh), you need to be aware of several  aspects that are unique to off-board terrain. ASLSK treats all off-board hexes as Open Ground for setup and movement purposes, including entry and exit. This means that your Infantry units will expend 1 MF per hex while moving off-board. The major exception to this standardized off-board terrain is that on-board roads are said to extend off-board for the purpose of road bonus. This can be useful when entering (and exiting), just be mindful of stacking limits, which apply equally off-board.3
In the next step your units actually enter the mapboard. Your units have the option of entering either during the MPh or the Advance Phase (APh)4 of your turn. Although they may not perform any other actions while off-board,5 your units may move off-board during the MPh. As long as they remain off-board, your units remain out of enemy Line of Sight (LOS), and therefore are invulnerable to enemy fire of any kind. But as with on-board movement, your units may not exceed their MF allotment while moving off-board, although leader and road bonuses may still apply.6
Off-board movement
There are a number of reasons why you may want or need to expend MF while off-board. Stacking limits, for instance, periodically require that you position your units in echelon (one behind the other) in order to enter along a road, or because you are compelled (or desire) to enter successive units on a narrow frontage. In this case, some units will not be set up adjacent to the board edge and will have to expend MF off-board just to reach the board edge.
Another good use of off-board movement is to sidestep on-board unpleasantness. Imagine that your opponent fires at one of your units as it enters the mapboard, leaving Residual Firepower (FP) in a board-edge hex that you now prefer to avoid.7 “No problem,” you say, “I'll just enter my next unit either side of this hex.” And you would be correct. However, you have more options than that. First, you can defer entry until the APh and enter the board not only when the Residual FP is no longer a concern, but also when the enemy can no longer fire upon your units. Second, you can move your remaining units laterally off-board and enter at a more convenient point. Or third, you can shift your units to either side of the tactical hiccup, remain off-board, and enter during the APh.
Hidden units present another problem —and opportunity—for your units as they enter the mapboard. In scenarios where an enemy unit is permitted to set up hidden in a mapboard-edge hex, it is possible that one of your units may stumble upon a hidden unit as it enters the mapboard.8 If this occurs, your unit is returned unharmed to its initial off-board hex where it ends its MPh. (Note that, as per the example in figure below, this unit may nevertheless enter the mapboard during the APh.) In light of this revelation, you may want to change the points of entry of other units that have yet to enter, in order to avoid entering either side of the newly revealed enemy unit. After all, braving Point Blank Fire (PBF)9 is usually bad for morale. But as troublesome as the sudden appearance of a hidden unit may be, its appearance also presents you with new opportunities.
Off-board movement can provide an ATTACKER with sufficient flexibility to not only adapt to changes in the tactical situation, but also capitalize on these changes. For example, finding a hidden enemy unit early in your MPh allows you to move your remaining units with less risk. Additionally, this discovery may also provide you with an opportunity to eliminate the enemy unit. However, the advantages of off-board movement can really come to the fore when your opponent malfunctions a key SW, or an enemy unit cowers.10 In such cases, off-board movement may allow you to shift units safely off-board and enter where they can gain the most from your opponent's misfortune. 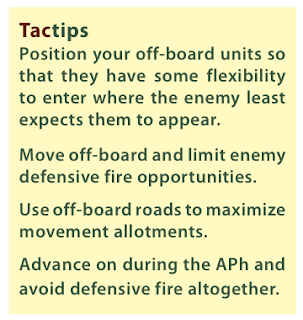 There are a couple of caveats, however. First, your units cannot use off-board movement to circumvent a restrictive entry condition. If the scenario card states, for instance, that you must enter along the east edge, you cannot use off-board movement to enter along a different board edge. Similarly, if your forces must enter on or between rows “F” and “K,” you cannot enter—even during the APh—on any hex that falls outside of these limits. The second caveat is that if any of your units fail to enter, or decline entry—on the turn in which they are scheduled to arrive—they are eliminated.
The figure below illustrates some of the ways that Infantry can enter the playing area proper during the MPh, and the APh. 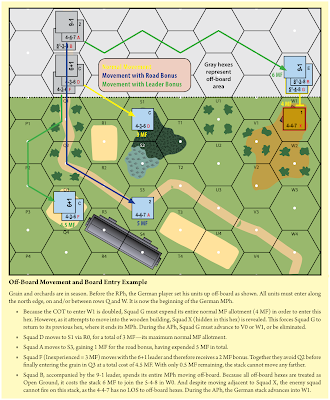 Exiting
Leaving the mapboard is simple. A unit can exit voluntarily if it is Good Order (GO) and exits in order to fulfil a particular scenario Victory Condition.11 Otherwise a unit cannot exit. Normally, only the forces belonging to the Scenario Attacker will be required, and therefore permitted, to exit. Furthermore, all units must abide by any exit restrictions noted on the scenario card. Should a unit be forced to leave the mapboard for any other reason, it is eliminated. Lastly, because off-board hexes are treated as Open Ground, the cost for Infantry to exit is always 1 MF, and the road bonus may apply.
I recommend that you play scenario S4 “Welcome Back” from ASLSK1, as the Germans. The scenario requires both sides to maneuver. The Germans not only enter from off-board, but also have to exit in order to win. This will provide you with an opportunity to practice your moves and display some off-board finesse.
Notes
1. The happy souls who own both ASLSK2 and ASLSK3 will note that the mapboard entry and exit rules are located in different parts of the rule book. The switch was required to make these rules more inclusive, as all units, including vehicles, are subject to the same entry and exit rules.
2. The word “player” was omitted in section 3.3 of the ASLSK2 rule booklet. This may have led some to believe, incorrectly, that units slated for off-board entry must be set up in the RPh of the game turn in which they are due to enter.
3. The rationale for setting up units for entry before the RPh is that it prevents a player from taking advantage of any change in the tactical situation brought about by events in the RPh and the PFPh. If you find entry from off-board confusing, butt a spare board along the entry edge and set your units up on the spare. If you are playing online using VASL, add another board and crop it so that it is only a few hexes deep. Note that the off-board landscape in ASLSK is a slight departure from the ASLRB2 [EX: A2.51; A2.6].
4. I review the APh (and the Close Combat Phase) in my article “Up Close and Personal.”
5. There is no provision for deploying squads into two HS in the ASLSK rule set.
6. Double Time is also permitted.
7. My article “Stop! or I'll Shoot” explains Residual FP.
8. Although rare, S24 “Sherman Marches West” (ASLSK3) does raise the prospect of such an occurrence. Although the probability is low that a German player would do so, the Anti-Tank Gun in this scenario may be set up hidden in a board-edge woods hex along the west edge of board t.
9. Refer note 10 below.
10. Among other things, my article “Ready, Aim, Fire!” examines pinning, the perils of moving in the open or along roads, PBF, cowering, and SW malfunction.
11. A Recalled armored fighting vehicle (AFV) exits involuntarily per section 7.10 in ASLSK3.
Posted by Chris Doary at 20:16

Chris,
I read "Notes 2" several times and am not sure of the wording.

Additionally from From SK2, SK3, and SKEP 3.3 Movement Phase (MPh): "Units are set up off board along the specified edge(s) of the map at the start of their RPh in the player turn of entry."

Thanks for the feedback. I do not disagree with your first observation, although some players may be led to believe that Section 3.1a applies only to "provisional reinforcements." But I agree that the rule booklets do specify that units set up offboard during the Rally Phase.

It really is a minor point, which is why I put it in the endnotes rather than the main body text. Sorry for the confusion.