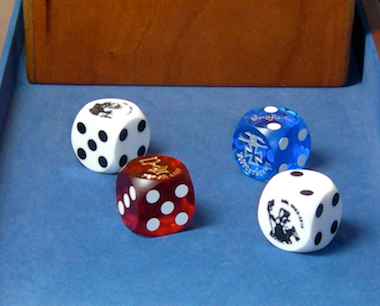 The winner of the August raffle is Liam Whalen!
Sixty-five Squad Leaders (followers) competed in the raffle this month. The winner had the lowest sum of four dice. Each Squad Leader as of 31 August was eligible for a roll of the dice. In addition, each Squad Leader who had joined Sitrep in July received a bonus roll.
This time, I spared my wife a long session of dice rolling. I used the four precision dice from our ASL Anniversary set of BattleDice above.
Liam Whalen and Eric Neff tied for the lowest rolls this time around. Both had a total of six on their first rolls. In the tie breaker, Eric had 16. Liam bested him by only one point for the win, with a roll of 15.
Liam wins a set of our unique ASL Anniversary BattleDice, as well as a $20.00 gift certificate for our KitShop. Congratulations Liam! I hope that the dice will bring you good fortune at the Canadian ASL Open later this month.
Thanks to all who have joined Sitrep. I hope that you will continue to visit the site, and enjoy the posts.
Up for grabs in the September raffle will be some new precision BattleDice. I had hoped that some of these would have arrived by now. But no matter, a lucky Squad Leader will have a set of shiny new BattleDice come October. I will post pictures as soon as they arrive.
I will be at the ASL Oktoberfest in Cleveland again this year. Therefore, the results of the September raffle will be delayed until mid October. However, in order to qualify for the raffle, you must be a Squad Leader as of 30 September. Moreover, from now until the end of the year, each Squad Leader will receive a number of rolls based on the number of months they have been a member of Sitrep. Remember, you must actually become a Squad Leader (follower), if you wish to enter these monthly raffles.
Good luck to everyone in the next raffle.
Roll low, and roll often!
Posted by Chris Doary at 12:10

Can't wait to see the new dice. I'm going to be needing some for BottosCon in November.