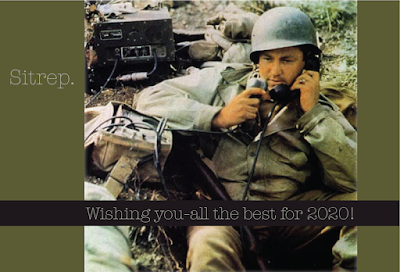 Another hectic year is history. On the plus side, ASL premiered in our new entertainment room last September. Two scenarios are already in the bag for 2020.1 And “Dean’s Defiance” is lined up for this Sunday. In what will be my third face-to-face game of the new decade, the Korean War will finally get its due in a big way. Some 300 soldiers of the Korean People’s Army are set to smash headlong into about half as many woefully unprepared GIs.
Sad, I know, that it has taken this long to get Suicide Heroes (W6.4) on the table. It’s also sad that I need to wear glasses in order to pull the counters and to play the darn game. But then it’s a sad fact of life that even those fortunate to have 20/20 vision may need to wear reading glasses at some point in their ASL careers.
The first post of a year is frequently given over to reflections and resolutions. I intend to do neither. I will provide a list of scenarios played in 2019. But I will not tie myself down with promises to play x, or design y. As much as I would like to do a lot more of both, my vision for 2020 remains blurred. (Cleaning my spectacles has not helped, in case you were wondering.) Still, I want to start the year on a positive note. And what better way to do that than with a raffle?
Happy 2020!
Ye olde Sitrep raffle
I thought I would spread the love by offering more than $300 worth of prizes to as many Squad Leaders as possible. Unfortunately some potential winners are following under arcane handles such as “Denkz Elf.”2 Your sometime sleuth has done his best to uncover the identities of the winners, but Sherlock he ain’t.
Using a dice tower, I rolled a white die with a Canadian maple leaf on the one-spot (or ace), and a black die with Rate-of-Fire reminders on three faces. I made 345 initial rolls, one for each Squad Leader on a spreadsheet dating back to 2011.3 Because Sitrep has lost and gained Squad Leaders over time, there were a lot of redundant dice rolls (DR).
Winners were selected from among those with double-ones and double-sixes, with first and second place overall being decided by a second DR. Some finalists were disqualified because they were found no longer to be following Sitrep.
The results of the DR were revealing. Of the 345 initial DR, there were 62 sevens, accounting for 17.97 percent of these DR. That is remarkably close to the mean. The probability of rolling a seven with two six-sided dice is 16.67 percent.
Closer were the results at the extremes, as the table above shows. While hardly conclusive, the numbers do suggest that these 12.5mm precision dice did not favour one result over another. Granted this is less consolation for those gifted with boxcars, which brings me to our first batch of would-be winners.
Boxcar sweepstakes
Ten boxcars yielded six names. Spanish ASL fan Fernando Gargallo makes an encore appearance, having scored a set of four British BattleDice from our Operation Market-Garden Series in March 2016. Scott Bricker, another fated follower, comes in for special mention due to the oh-so-cool ammo crates he has manufactured for storing dice.
Andy McMaster, Mark Fischer, Stewart Nairn, and Whit Richardson round out the list of winners in the boxcar sweepstakes. Each is eligible to receive a Japanese Anti-Tank Magnetic Mine (ATMM) and Tank-Hunter/DC Hero Check die, as shown below. Note that this die may also be used to create (South Korean) Human Bullet Heroes and (North Korean) Suicide Heroes!
Snake eye candy
Fellow Ontarian Val Ruza was one of six current Squad Leaders to roll snake-eyes. So too was Mike Cadieux. Hailing from Oklahoma, Mike won one of our earliest raffles way back in October 2011.4 Chandler Braswell and Robert Sohn are likewise winners. Each of these four gentleman have won a pair of our colourful 16mm Belgian BattleDice, part of our Europa Series.
The runner-up in the snake-eyes roll-off is Alan J. Clark. Alan wins pairs of 16mm Hungarian and Romanian BattleDice. The white Hungarian die features the early-war Hungarian cross. The Romanian set pairs the Romanian tricolour with a stylized royal cypher. 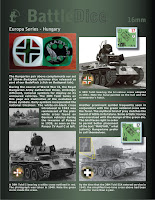 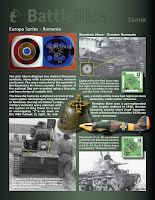 Great to see you back!

I see you went with the Polish "balance" in your game: "Treat grain as plowed fields." ;-)

Oh and that TKS is a beast! :D

Oh yeah .. I completely forgot why my opponent wanted the balance. ROAR looks dead even for FrF2!

Chris, glad to see you posting again. Just posted on ASL Facebook group how I have used your excellent graphic explanations of certain ASL topics as play aids for myself.