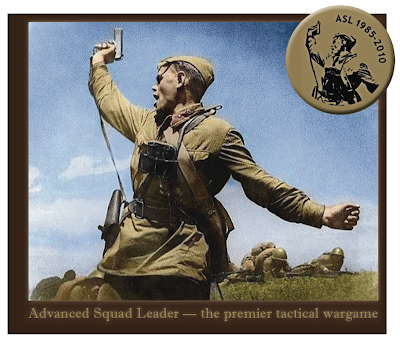 Mission brief
BattleSchool is a venture dedicated to broadening support for Advanced Squad Leader (ASL), and improving game play. ASL is a hex-based, tactical-level wargame that evolved from an earlier game called Squad Leader (1977), designed by John Hill. Both games were published by the now defunct Avalon Hill Game Company. Multi-Man Publishing is the current licensee of the game system. For an overview of ASL during the last 25 years, see my State of the Game: ASL at 25.

ASL is a highly detailed, but necessarily abstract, portrayal of combined-arms combat at the platoon, company, and battalion level. The game originally aimed to model various aspects of ground combat that occurred on all fronts during World War II. However, it has since expanded either side of this period to encompass the Spanish Civil War, the Sino-Japanese War, and the Korean War. Indeed, some scenarios have been set as early as 1908, with the Russian Civil War arguably receiving the most treatment of any conflict prior to 1935. The game system is flexible enough to allow scenarios involving amphibious operations, air drops, and subterranean engagements.1 That said, the system works best with forces that were trained to fight at the squad level, the basic sub-unit of the game. Armour, artillery, and air support can all play a role in an ASL scenario. But the queen of the ASL battle remains the infantry squad.

Situation Report—Sitrep for short—is a newsletter (in blog form) reporting on developments within BattleSchool, and in the ASL community at large. The primary focus of BattleSchool, as the name suggests, is on schooling novices and veterans alike in the subtleties of ASL. In keeping with this focus, BattleSchool aims to provide materials that will help players get more out of ASL. At bottom our goal is to reduce tedium and increase gaming pleasure.

Managing to get by
Your resident scribbler is an ex infanteer. I joined the military at age 16, and played a fair amount of Squad Leader as a teenager.
I spent much of the 80s on exercise, or out of country. I later served in the Middle East. Due to all this travel I played very little Squad Leader.

In the late 80s I was able to hook up with an old school chum. Like me, he had joined the infantry, albeit a different regiment. As fate would have it, he was seriously injured during a military sports event a year later. I was overseas at the time, and learned of his accident over a ham radio. When I returned home, I visited him at the rehabilitation centre. ASL had just been released and neither of us had seen it yet. We agreed to give it a try. A few years later, we began to play ASL regularly, at least when I was in town.

I left the army in the early 90s, having returned from what proved to be my last tour. It was time to move on. I returned to school and earned a degree in history. While an undergraduate, I played very little ASL. Once I took up graduate studies, ASL play virtually ceased. Within days of completing my MA a cycling accident cancelled plans to reenter the military.

I found some part time work, but it quickly became clear that my prospects for employment were poor. A year later I left Canada and ASL behind. My wife and I emigrated to the antipodes. She had been able to secure a job before we departed. I was able to find part time work almost immediately. Within a year I had a full time job, and a year later I was an operations manager with the largest university in the country. Everything was going great. But I was in an ASL desert.

When I dropped by a local game store, all I got were blank stares when I inquired after ASL. Suffice it to say that I did not play any ASL. Hiking, local vineyards, and golf provided plenty of distractions.

For reasons I will not go into here, my wife wished to return to Canada. So in 2006 I found myself back in an employment desert. However, my old chum was still here. My wife suggested I contact him and see about playing ASL again. I did. I also went to my first ASL tournament in almost 20 years. I began the BattleSchool project shortly thereafter.2

With no proper day job, one might think that I get to play a lot of ASL. Regrettably, that is not the case. But I am playing ASL—a lot more than I did in the mid 80s, and certainly more than I did while I was in university. Like Middle-aged Man of Saturday Night Live fame was apt to lament, "I'm working on it!"

Notes
1. See my after-action report of a scenario set in Papua New Guinea for an example of how ASL plays out in the jungle.
2. For more background on why I play ASL, see this article. If you are new to ASL, then you may find some of the ASL Starter Kit articles on this page useful.

Chris, I see on your website that you have a link for the West Coast Rumble tournament, which takes place at my convention BottosCon. I think a better link for a description of the tournament and it's format would be http://www.lonecanuckpublishing.ca/West%20Coast%20Rumble%202013/2013%20ASL%20Tournament.htm
Thanks
Rob Bottos

Thanks so much for making this site, Chris - I have discovered it belatedly, but I will now sing its praises from on high! :)